Modern Church music is not the Rock of Ages

I spent some time in the past going to one of the more modern churches for a while. It wasn't a "MEGAChurch" by any means, but just modern in the building style, the lack of formality, and the music. I'm of the opinion that if you're going to go to church, it may as well be a real church. The type of sermons going on in these modern churches vs. the old fire & brimstone or any other sermons one may have been used to in the past is too long a topic for this post. It wasn't so much the rest of the service, though, but just the music that took the church out of the place. 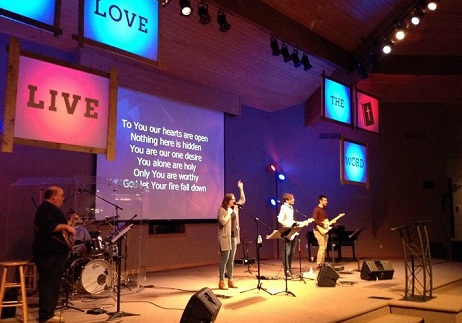 As can be readily seen in 90% of the over 220 posts with the music topic key, Peak Stupidity is not at all against the rock and roll. We have no problem with Christian Rock, either. In fact, lots of it is done very well, and, when compared to almost ANY other modern music being made, is more joyful and less annoying listening. It has not been featured here, mainly because, at the time that I enjoyed a lot of that on the radio, I was already past the point of categorizing artists and collecting music. I'd have to go back and find people from the past to get a handle on what was/is the good stuff. However, there's just no place for Christian Rock in a church, though!

It's just not church if you don't have the old familiar hymns, sung, or better yet, sung and accompanied by a loud pipe organ, that's all there is to it. The hymns are hundreds, if not thousands of years old. They've been time-tested, see, while the new songs played on guitar, keyboards, and bass have not.

Because the tunes don't stay in the churchgoers heads, the lyrics don't either. It doesn't help when the tunes are complex and don't have a simple bunch of verses and same chorus. You can tell this music doesn't stick, because, well look at the picture above. That big screen up there is required, with a dot that goes from syllable to syllable, to show those who want to sing where they are in the song at all times. For a good solid song, you shouldn't need that.

Nope, you need a loud-ass organ to put me under the impression that, yes, we are in Church. I don't know if the Evangelicals would ever think of going back to the old standard hymns. As a sop to the music directors with their insistence on modernity, I'd give them the option of not buying the old hymnals and letting people pull out their phones for the lyrics. "Let us all stand, type in hymn number 218 on our phones, and go to airplane mode..."
" ♪♫♬ Rock of Ages, cleft for me ... ♪♫♬"

Moderator
PS: Christian rock was OK on the radio. You can sing along with it, but not sing it, or you'd be the one on the radio. The hymns are quite different.

Oh, lots of churches don't have the look that you want, either, but I guess I can't blame them for just chipping in for a metal building or a spot in a strip mall - not exactly like the Sistine Chapel - maybe one can get some stained-glass blacklight posters.
BernCar
PS: Amen!
I guess the idea has been to get (or keep) the young'uns in the church, but the new music and amps and bouncing balls on the screen diminish the majesty and tradition for me. No knock against Christian rock, but it's just not as grand or moving as the pipe organ and choir.