All Hail the Editing King of Wikipedia! 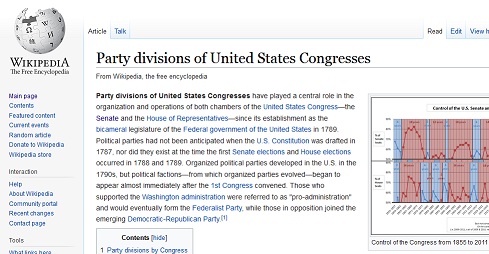 Wikipedia is big. That was a good idea, using the same clever idea described by Peak Stupidity in The F.A.G.S. space and user-generated content to fill up 5.7 million web pages (so far) of general knowledge. Let the website users do the work, once the framework ("platform" is the word the geeks use) has been set up. I'm not at all knocking it.

Peak Stupidity references wikipedia quite often, and we link to the site not quite as so often, but a decent amount. There's no doubt that if you just want a few facts from history (The Long March) technology (Drum Brakes), and so on, for 5.7 million things, that site is extremely useful for anyone, including lowly bloggers. As with the screenshot at the top, taken of a wiki page on the membership in the political parties of the House and Senate throughout US history, you're not likely to get many errors. That's what the wiki editing features are about - again, let the site users do the work, to avoid a staff of, what thousands of people tediously reading web pages?

Like with a lot of life, things work pretty well until people get political. Wikipedia is a big open target for those on any side, but (since fewer of them have real jobs, mainly) particularly the ctrl-left crowd to mob the site with their own unintentional and intentional falsehoods. What does wiki believe, and how far left are they? I don't know the answer, as the site is not up there in lights like the (supposedly) money-making highly-capitalized sites like Facebook and Google. However, I've never seen anything Big-Biz-like yet on the web that leans Conservative and anti-PC. Without experimenting via editing oneself, one would not know if the wiki people themselves are even involved. Without their involvement, it's more a matter of, again, who has the most time on his hands? I think I know the answer.

It's likely though, that to avoid trouble, the wiki people do have some sort of filters, mostly automated, but probably with human back-up, to screen out whatever is beyond the pale. "Beyond the pale" in whose opinion is the big question. Think of some virtual (on-screen, that is) slider bar that wiki management can move around at will. That can make it even harder on a conservative un-PC guy that wants to stick some extra truth into a wiki page, or correct untruths edited in by the ctrl-left.

Well, in a surprisingly pop-up/annoyance-free page on the CBS website, there is an article on the guy below - Meet the man behind a third of what's on Wikipedia: 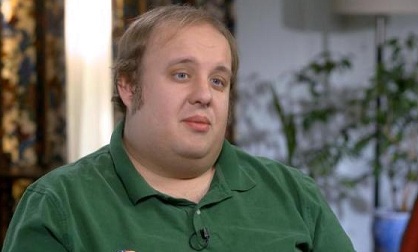 The guy's work is pretty impressive, even if he is just making it up as he goes along! He's done something like 2 MILLION edit jobs. (Granted, some may have been just date changes, or even spelling corrections, but it all takes time.)


Still living with his parents in the home he grew up in, Pruitt has always remained true to his interests.

How much money does he make from his work? None.

That was just humorous, but that's not anything I've got against the guy. I've got a lot of respect for hard-core fanatics, so long as they aren't stupid along with fanatical.

"The idea of making it all free fascinates me. My mother grew up in the Soviet Union ... So I'm very conscious of what, what it can mean to make knowledge free, to make information free," he said.

I don't really think free or costly is the problem. Information today costs even less than the USSR version of the Lyin' Press, Pravda* did, with the internet now. It's not about free or not, it's about truthful or not. I hope the guy's got as much respect for the truth as he does for free stuff.

Pulling from books, academic journals and other sources, he spends more than three hours a day researching, editing and writing.

Even his day job is research, working in records and information at U.S. Customs and Border Protection. He joked that his colleagues probably think he's nuts.

"Because I edit Wikipedia all the damn time, I think that one sort of goes without saying," Pruitt said.

"All the damn time, huh? It's really nice to work for the government as a non-essential employee, ain't it? His colleagues think he's nuts? Well, perhaps, Mr. Pruitt shouldn't be on Wiki doing edits during work hours, and instead be helping keep the Borders Protected. He's had plenty of time for his edits, if his Mom would leave him alone, over the last few weeks.

That may have changed when Time magazine named him one of the top 25 most influential people on the internet, alongside President Trump, J.K. Rowling and Kim Kardashian West.

J.K.Rowling, Kim Kardashian? Who gives a shit? This guy has a lot more influence, when it comes down to it. I hope it is mostly for the benefit of those seeking the truth on-line. You ain't gonna get that from Harry Potter books or the tweets out of Kim Lardasshian's ass. The article mentions that this fanatical editor fixes the Wiki pages by checking with the books. Books can have all kinds of agendas too. To get at the truth, it's best to use multiple sources. Does this guy have time for that? (I'd rather know that only people who are real experts in certain areas spend the time to straighten out the appropriate Wiki pages.

"We know there's a lot more to be done. That's why we're very excited about projects like Women in Red, which seeks to identify and place more content on women on our platform ... Steven has been a large contributor to that project,"Kinyanjui [Wikipedia's VP of Communications] said.

OK, there ya' go. Specifically putting in certain content - is that the job of an editor, to slant the news? I guess Mr. Pruitt got this sort of thinking from his Mama's side.

As for Peak Stupidity, still not quite on the top 100 of influential people on the internet, we do like to look around when we provide links. I'll link to Wiki on the straightforward, non-political stuff, but we really try to look around a bit on anything in which an editor like this can slant the story.


* translates to "truth" in English.

Moderator
PS: Nope, I haven't heard that particular joke. Most of the old USSR-Russian jokes were funny, but still pretty much downers. I got a feeling we'll be creating some of our own similar ones, the way things are going here.

Thanks for the opinion on Wikipedia. Re, the John Derbyshire story, if Peak Stupidity were famous, no, notorious, enough to have our own wiki page, then I would have to start loads of new accounts, or whatever it would take, to keep setting the record back straight.

On the old men and jokes, you may just forget who you've told, or, yeah, wonder if people would know enough to get it anymore.
BernCar
PS: I always thought Wikipedia was a terrific idea and have actually donated a couple of times. I have read, however, of problems with ctrl-left editors letting their political leanings influence topics like climate change, et al. It seems I also read in John Derbyshire a few years back that the wiki on him had been changed repeatedly in some way that annoyed him. Consequently, I use Wikipedia to get quick info on a subject and something of a bibliography if I need further research, but after hearing of the political tendentiousness of some editors, I don't donate now, and am reluctant to rely on the accuracy of topics that can have political colorations.

Re: Pravda. The other mainline newspaper in the USSR was "Izvestia" (means "news", in Russian I am told). The old cold war joke was, "There is no pravda in "Izvestia" and no izvestia in "Pravda." Stop me if you've heard that before. I know now why old men tell and re-tell lame old jokes. They don't have a good idea of what trend has passed into obscurity--can one still wear a paisley tie? I hope so.