While perusing an older post, DIY Tire Repair with Cheap China-made Crap recently, I noticed that it had a note about another humorous story about cars to be coming at some unnamed time. That's now. 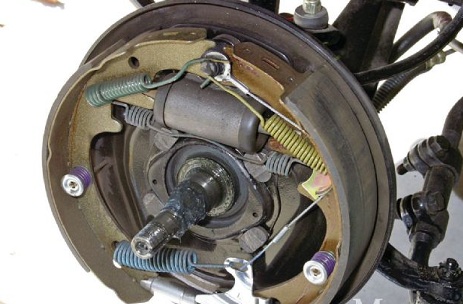 This quick story is about drum brakes on cars and the advantages of some of our new Artificial Stupidity, which (can you tell?) has been often bad-mouthed on the Peak Stupidity blog. Let's give some credit where credit would have been due, had we had much of an internet, and any cheap digital cameras, in the mid 1990's.

Drum brakes are still around on older cars, and even on some of the low-end new cars. Disc brakes are simpler, and provide more stopping torque. They have replaced most drum brakes for this reason, but there was probably a reason they didn't come around until to be used in autos until the 1950's through '60's. The drum technology continued from the old band brakes, and possibly the ability to contain the higher hydraulic pressure needed by disc brakes was a factor. (See, the drum brakes are MORE ingenious, as lots of things were in the past. The arrangement of the "shoes" to have one for forward and one for rearward motion set up to where the friction force vector helps force the appropriate shoe into the drum keeps the pressure and/or piston size required lots lower.) Here's a quick comparison of these 2 types of auto brakes.*

This ingenuity just mentioned is part of the story. I had the car jacked up, the one wheel off, and the brake apart, with all of the pieces seen in the picture - they all seem pretty similar - on the ground. I had my new brake shoes ready to go. As I tried to get this thing back together, my memory being not photographic (more like pornographic), I was not sure of the placement of all of the three springs, and maybe another small part or two.. That's where a digital camera would have been really nice, right? Take one picture, or even one at every step, and view them during re-assembly.

Nah, but the auto parts store was just 1/4 mile away. The one jacked up being my only vehicle, I proceeded to walk there, get to the right Chilton's book (remember there was nothing on the internet of note, not even Peak Stupidity). Rather than pay the $20 for the book, I just perused it, took a long long at the picture of the innards of these brakes, and walked home. At home, I worked for another 1/2 hour before realizing that, no, my memory really was not that good, and I didn't have it down. I know what you're thinking: "look at the other wheel, moron!". See this is where a jack-stand would have been nice, but this was not a time of plenty for this blogger. Yeah, I could have used a cinder block, but I decided that I'd leave the other brake together, and walked back to the auto parts store.

I took another look at the Chilton's book, which was starting to get rather greasy, on that one page. Back at the house again, I almost had it together. I wasn't sure though. I made a 3rd round trip to the auto parts store, and really, really, had a picture of the drum brake assembly in my head!

Now, I suppose this is why you do see people looking at their phones all day long. A smart phone that was on-line would have been nice. I'd have settled for bringing a lap-top computer outside and working like that, no, just going back-and-forth into the house to look at that 15" CRT monitor would have been better, had I a computer at all!

Next time I'm back in the mid-90's working on something complicated, I will at least spring for the book.

* Note that the ease of incorporating the emergency/parking brake in the drum systems is an additional plus for them.

Moderator
PS: BernCar, while reading the comments under the latest Fred Reed column (unz.com, though I think you are familiar), on all things great about the old Mayans, it makes me pessimistic in answer to the question(?) in your 2nd paragraph. The way you see it is maybe the way the Western world is going or maybe the whole modern world.

However, one does wonder (again, continuing from those comments) what happened to some of those educated societies of the past. Alexandria had the library of all that knowledge burned down, but how did some of these other civilizations just "lose it"? It's hard to believe we could, but then lots of other things of stupid in the world today would not have been believed possible in 1960.

We now have ways of saving vast stores of knowledge in caches the size of shoe boxes, say all over the world, to be on the safe side. How would you be sure some future people could read it all though? (Supply them with an electronic reader with a long-term power supply?) That's food for thought and another post.
BernCar
PS: Funny, because it sounds all too familiar.

It also brings to mind how ingenious our forebears were and the evolution of design. And here I talk not just about a generation or two ago, but centuries back. God bless our engineers of today and the work they do. They above all know they stand on the shoulders of the giants who went before them, but does the everyday guy on the street appreciate how clever his species is? Imagine a Roman engineer building the Coliseum, or an engineer building a cofferdam in the eighteenth century.

I guess we may define optimism or pessimism by whether one believes our history has been one of continual, if punctuated, progress or one of a gradual decline in our abilities as a species, subsisting on past accomplishments, with fewer and fewer people responsible for more and more of the work necessary to improve. Probably always been up to the happy few tinkerers.