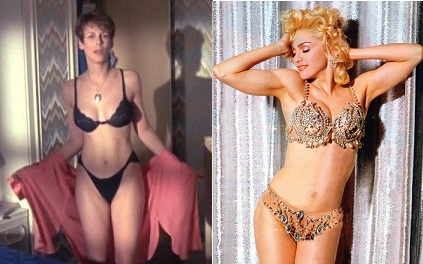 (Just another excuse to get in some bikini pics? You betcha!)


Going way, way back, from near the beginning of this blog, Peak Stupidity has had a bug up it's server about names. In I should have named him after a man of the cloth, I mentioned how I'm really not enamored by the current 10-year old increasingly prevalent trend of naming kids last names. I could go on about it, but the reader could just think of the kids in the neighborhood (no not in "the hood", as those names are a whole nother thing entirely, plus I don't know French) or ask around the elementary school. I am running into new ones every day.

As I went to read a Takimag article by a guy named Joe Bob Briggs, I dropped out of memory what I meant to write about his article (I'm sure I was in agreement though) in order to rant on about this 3-name crap. Look, we are very lucky to have middle names here in the Western world - I! GET! THAT! No, the Chinese have no such luxury. The family name, which appears first, is fixed, so there is only one name to come up with, hopefully not a last name of a Communist! It IS nice that we can honor a couple of family members at one time, if we wish, easily both last names these days.

It can be an especially big convenience having this spare name, in the case when the first name is something like "Gaye", for example. Yes, it's a real example, and the lady in question is known by her middle name. Somebody screwed up, but this solution is satisfactory.

However, the blatant use of the three names together is annoying. It is mostly a movie star and famous people thing. I will make an exception for anyone, including movie stars (including possibly Joe Bob Briggs, the Takimag writer who inadvertently instigated this post) who is from the South. From the time of way before TV character Mary Ellen Walton*, Southerners, especially girls, often used their middle names along with their first names as their everyday names. It isn't/wasn't a pretentious thing for them.

The actors and actresses should just get off their high horses and use a first and last name like any normal American. I'll give you a break for a middle initial, as in Michael J. Fox. Once in a while, names can be too close, or the same as some other well known person. As examples, Tom Wolfe and Thomas Wolfe are two DIFFERENT novelists, the former having died just recently, and the latter back in the 1930's. It may have been wise for Tom Wolfe to have used his middle initial.

Then you've got the other end of the spectrum, those who think they are so well-known that they will use nothing but one name. Musicians "Prince", Sting, and Bono are examples of musical artists indulging in this flavor of stupidity, along with Madonna above. Does this make you special, people? Prince Jefferson, Sting Williamson, Bono O'Connor, and Madonna Smith would be perfectly fine names to put on your album covers (what the heck are those?!), if you'd asked me.

Yes, there are more important pieces of stupidity to cover, but you've gotta get things out of your system. That's what blogging is about. There are quite a few posts on the front burner, so it should be a decent blog-week here.


* Not to be confused with the bra-less wonder, Sue Ellen Mischke, the Oh Henry! candy bar heiress of the show Seinfeld. (More here.)

Moderator
PS: Oh, agreed, BC, with the caveat that she stay pretty much like that picture from the "A Fish Called Wanda"* era. I'd call her by any name she wants at the right time, but again, back in the 1990's.

* A very funny movie, BTW.
Moderator
PS: Fiddlesticks, at least we knew what Elvis' last name way, for cryin' out loud! Costello .. right? Yeah, Caesar was pretty pretentious, and I don't know about "the great" Maybe it was a last name in Russian, and we've just been spelling it wrong. I wish I had some Russian fonts so I could demonstrate.

Thanks for the funny comment, FS.
BernCar
PS: Well, I am willing to indulge Jamie Lee Curtis three names if she wants. That middle name is such a little thing compared to her other attributes.
Fiddlesticks
PS What about Elvis? Is he exempt? I think he started the whole single name thing. Or was it Caesar? What about Alexander. Or does "the great" count as an additional two names? I dunno.