Thousands Standing Around without pay 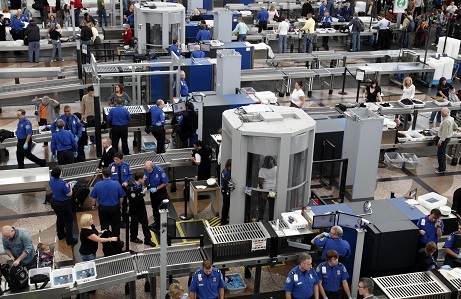 Actually, the problem is more that some of them DO work hard,
but at a job that involves DOING US WRONG, for anyone who values his freedom.*

Per Zerohedge yesterday, More TSA Workers Citing 'Financial Hardship' As Reason For Calling Out Of Work. They can just as well stand around at home. I think this can only be a good thing. If there are a dozen or 2 passengers stranded at a slow-moving TSA line at a small airport, the airline WILL hold the flight. They will eventually put pressure, as much as one can on a government agency, to speed it up to avoid this. At the airline hubs, the mass of misconnected passengers will cause the execs to do the same.

Early on here, I do want to emphasize that the discussion here is based on the major wrong assumption certain people make, that the TSA SHOULD be able to even operate in America to begin with. This is not a new topic for Peak Stupidity, as we have discussed the wrongness of the TSA before, (along with the Communist-inspired name of the Cabinet Dept. it operates under, the Department of Motherland Homeland Security back on September 11th, 2017.

The Zerohedge article gives some easy-to-work-with numbers: There are ~ 51,000 employees at an average annual salary of $41,000. Lop off the one-thousands, and it gives a cool $2 billion spent yearly. Hey, wait, 2 1/2 years of that, and we're in the (widely-government-style-inflated) cost of a wall on our southern border. Let's see, if these TSA people had been sent home when Trump became President, with this extra money, the wall could have made it from National City, California to somewhere around Del Rio, Texas by now! (Let's ignore for the moment that this all is < 1/2000th of they yearly Feral budget, so it's all just chump change.)

Just looking at the $41,000 annual salary, for a minute, and the ZH headline, no, it's not much money these days. It does beat minimum wage service jobs by a long shot though. I don't want to hear that these government employees are living paycheck-to-paycheck-to-well, missing the last couple, haha. One can live off that and even save enough after a year to enable being shy a couple of checks. One just can't try to live like a 1980's or '90's middle-class American though, and do that, which is another topic. I guess the almost-impossible-to-be-fired, low-pressure government lifestyle makes this crowd unworried about living on the edge with their finances.

In earlier discussion on this Feral Gov't Shutdown, ... is it a threat, or a promise?, we brought up the "office-to-pool-hall pipeline idea. The TSA would be a choice example for the best use of that policy. Imagine if we just paid these people to stand around, but NOT AT AIRPORTS. You have to stand up while playing pool, so these people should be acclimated to that new use of their time. What a more pleasant experience air travel would be! Sure, pay these people the 2 billion anyway, it's the same as welfare - what's the diff? 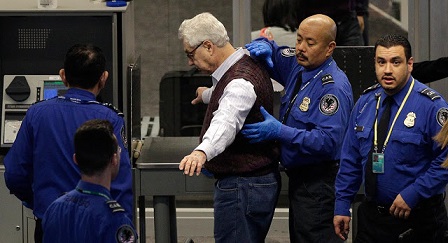 I mentioned that bad assumption made to enable this discussion to begin with, on whether it's Constitutional. No, it's not. Even if we don't go this far, to basic principals on which our country was founded, such as this security of person and property from the Feral Gov't, there is the other stupidity implied in having these 51,000 people do this job while the southern border remains wide open. Let's get off the overwhelming Hispanic immigration-invasion for a bit here, and just think of others who are getting in to the US illegally and without anyone's knowledge of their identities. Yes, there is evidence of plenty of people from all parts, cough, cough, MOSLEM, cough, parts of the world getting in this same way. Though some may have come a long way just for the bennies like the rest, others may have different agendas. The stupidity implied by the leaving wide open of this most basic path to a loss of security while insisting that we need these 51,000 people searching American children and grannies is some high-level stupidity indeed.

I'll just send you to the ZeroHedge article comment section to get some more comment on the utter stupidity of having the TSA. I wasted 1/2 hour on an Apple device trying to learn to copy text better off of some sites (while it works fine on others), so I cannot put my favorites in here right now.


* There is an Anarcho-Tyrany aspect to this, as, even with all the riff-raff in government, many Americans do try to do a thorough job at whatever their jobs are. Were this Latin America, there would be no integrity, making it somewhat more pleasant, ironically. Additionally, having travelled from the same places a lot, I have met some very decent people going through this nonsense, which is a dilemma. Do you make everything personal based on principle, or just go along, like everyone else, and treat the decent guy as you would a neighbor (which he might end up being)? This is the subject for an upcoming follow-up post.

Moderator
PS: LOL, Nah, I don't think it was Death Wish III (and I did watch all 4 on TV at some clubhouse a few years back, as a Death Wish marathon. That was Mary Poppins, yes.

Yeah, I guess the TSA at small airports have to get hours in piecewise and maybe build a schedule around other work too. Again, I try to be friendly to people I see over and over, but it puts my mind in a wierd state, because I think "well, could you not have gotten something that involves doing something more, ... right?". Probably not, in a lot of cases.

You are absolutely right that people are getting inured to it (perfect word, in fact). That may be the subject for another post, as my comments there about what's going on just don't ring any kind of chord with most people, on what the problem with all ofthis is.

Great remarks, so maybe I'll include all what you wrote in that subsequent post.
BernCar
PS: So many good points here, I don't know where to start. First, where the hell did this "Homeland" business come from? In my long life here, I never heard our country referred to as "homeland". I knew it was "Mother Russia" to the Russians and "Fatherland" to the Germans (at least those bad ones in the movies), but I never heard our country referred to as anything other than America, USA, or "our country." What marketing exec came up with "Homeland"? I was always suspicious of that under the rule of thumb, "When the govt comes up with something unpleasant, they give it a name like 'Patriot Act' or 'Sugarplum Fairy Act of 2021.'" So naturally I assumed "Homeland" was a little bit of sugar to help the medicine go down, as they say in "Mary Poppins" or "The Sound of Music" or "Death Wish 3"-- I forget which (although come to think of it, I haven't seen the first two, so it must have been "Death Wish 3" where I heard it).

I heard early on in what little debate there was about establishing the TSA, that the airlines were all in favor because it took them off the hook for their own security. I seem to recall that previously after handling their own security in their own way since the beginning of commercial air travel, they had been required to perform security in accordance with new govt regs and they were quite rightly pissed off about that. Then along comes the TSA proposal and the airlines are, of course, all in favor. As Wm. H. Vanderbilt said, "The public be damned....Railroads are not run on sentiment..."

Look at the photo of the white-haired fellow being "wanded"-- for gosh sake, does anyone thing he's going to hijack a plane? The only danger from him is if has too much to drink and pinches a stewardess' ass (if we are still allowed to call the wait staff "stewardess," I forget.) Anyway in a fit of the usual idiotic PC, they won't check anyone in a hijab, but will strip a little old lady like your grandmother down to her shimmy-tail (grandmother-speak for chemise, I think).

Yeah, it doesn't seem like it's a bad deal for the TSA Gropers to me. I think the TSA was advertising around here for part-time help at the small regional airports at $20/hour for part-time work. You couldn't build a career around that, but sounds like a good deal for a student, for instance. You'd probably have to be available a couple of times a day when Ozark Air's puddle jumpers bounced in. Haven't checked lately to see if they're still looking for people, but apparently they were having trouble finding help. Maybe they couldn't find applicants who could pass the background or drug tests.

The worst part is that we used to be incensed by the inconvenience, not to mention the personal affront, of this kind of intrusion, but we have become inured to it. We have gone from ridiculing the very idea that govt was spying on us, to the next line of self-delusion--well, if you don't have anything to worry about, what's the problem?