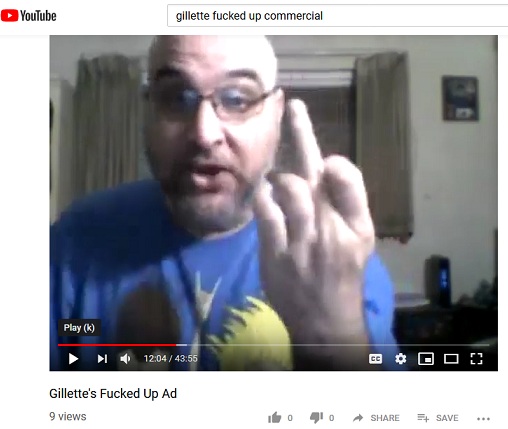 Again, Peak Stupidity is not ashamed to be a day or two behind the tweet and TV infotainment world. Being off of that stuff means we wouldn't have had to see that purposefully nasty, anti-white anti-male ad (yeah, what was it for, oh, men's razors?) if we didn't have a blog to publish.

The kind of stupidity here is very much like that described in the previous post - it's the "toxic masculinity" thing for which a post was promised. Well, with this type of stupidity that fills up railroad hopper cars, I think there'll be quite a few coming. Here's Michelle Malkin's column again, and there was a Steve Sailer post in which the hundreds of comments give shaving suggestions, if nothing else. Also, a new Peak Stupidity favorite blogger, Audacious Epigone, chimes in with his praise for the commenters all over in Geldette, the Impotence Men Won't Forget.

Yeah, Mr. Epigone, with a hat-tip to John Derbyshire, who I've read about this before too, is right - hope for the future lies with the words of the prophets the commenters, on youtube, the blogs, etc. It's not just the commenters, of course, as it is "you"-tube, not exactly the Lyin' Press. Just look at the guy above. The reader can see what exact phrase we used to search for the ad. I happily ended up with this guy wearing the Beavis and Butthead shirt with his 9 hits, going on 10! It was very amusing to me until I noticed one of this somewhat obscure journalist's rant went on for 45 minutes. That does not at all dampen my appreciation for guys like this, making the rants that bigger outfits like Peak Stupidity JUST WON'T DO.

I can redeem myself for that lack of outrage, which I blame solely on my not watching the tube, errr, OK, plate, to get technical. By tomorrow, besides having a nice rant against these sick Gillette advertising bastards, I'd also like to put forth a theory about it, which hinges on the fact that many think that any publicity is good publicity. However, we all have heard of Gillette razors, so what would the point be?

As far as boycotts against these anti-white-male nuts at Proctor & Gamble, please read the 3 parts of Boycotts, Buycotts, and CEOs who should shut their mouths more, Part 1, Part 2, and Part 3. The gist of it is that some boycotts can be just about impossible to carry off, especially with the conglomerates like Proctor & Gamble. (In fact, that company was named in an example in one of those posts.) However, just to cut out their razors, with a sharp eye as to who exactly manufactures your replacement, sounds like an easy-enough gesture. It's working for our youtube pundit above. He looks like he hasn't shaved since he saw the ad!

Moderator
PS: Oh, we've had a thread on here that went on for 8 posts if it was a dozen, one time! Thanks for trying to help. That's just the one alias I use for links.
BernCar
PS: LOL. I was trying to get a comment thread started.
Moderator
PS: I'll confess right here to my favorite and most industrious commenter that "Jimbo" is my name (for ease of searching) that I attach for articles I want to post later on. I really like to keep ideas off "the cloud" and that (even email to myself), so this is my crude method.

This is a prompt for a post I am going to write just today, in fact.
BernCar
PS: Thanks for the link, Jimbo. The comments at ZeroHedge are best part of the site. They cut to the heart of the matter pretty quickly. I wonder what happens as more and more TSA workers have to call out cause they "can't buy gas to go to work." I bet Trump remembers Reagen and the air traffic controllers strike.
Jimbo
PS: Zerohedge on shutdown effect on the TSA, with usual great comments: