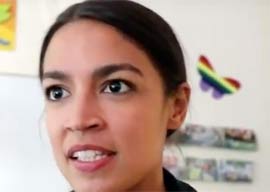 Peak Stupidity has promoted Mr. Jim Goad before, as tied with Mr. Steve Sailer as the best writers for the Takimag webzine. Perhaps that site should be in the blogroll, though we've just criticized it for the usability (see digression - what's new?! - in this post).

Well, I just got to reading Mr. Goad's The 18 Most Annoying People of 2018 retrospective, with his intial caveat that we all may have our own picks, likely a lot more than 18. So, don't read it with the intention of correcting him (Takimag doesn't have commenting anymore anyway), but just enjoy it. It seems like Mr. Goad's emphasis in the realm of annoyances is the feminist and genderbending types of stupidity, hence those topic keys are attached here.

The curmudgeon of conservative bent will like the article, so I have not much more comment. I'd heard of at least of the annoying individuals "profiled" (haha) and even posted about a few of them - we do try to keep up with stupidity and practitioners thereof. Let's see, here are posts about # 18 - David Buckel, # 15 - Claas Relotius, lucky # 7 - the Øb☭ma, #4 - Sarah Jeong, and Jim Goad's #1 pick, of whom you may as well read about, as a sample:

Political beliefs are all well and good so long as you don’t smack others in the face with them. But there’s a special sewer tank in Haiti reserved for parents who use their child’s freshly murdered corpses to make a political point. Mollie Tibbetts was a white Iowa girl who once wrote “I hate white people” on Twitter. After her dead body was found in a cornfield this August, the life beaten out of her by an illegal immigration from Mexico, her father Bob penned a nauseating OpEd that placed Mexicans above white Iowans:

Today, we need to turn the page. We’re at the end of a long ordeal. But we need to turn toward life — Mollie’s life — because Mollie’s nobody’s victim. Mollie’s my hero….The Hispanic community are Iowans. They have the same values as Iowans….As far as I’m concerned, they’re Iowans with better food.

Mr. Tibbetts, I wouldn’t feel bad if one day those “Iowans with better food” were to feast on your carcass.

Mr. Goad is not so civil with his words with some of the rest of these 18 annoying pieces-of-work, but, hey, this guy is numero uno and deserves a little respect.


OK, good readers, I've got not only about 30 or 40 tabs open in the browser with more blog fodder, but a few more in my head, and others promised from previous posts! There will be no running out of material in the near future. More to come on Monday. Thank you for reading!


* Well OK, since she's on the graphic, let's hear about numero dos:

What can be said about this horse-teethed economic retard that hasn’t been said beyond underlining the fact that she claims to have come from poverty but instead grew up in a plush ’hood that was 81% white and whose residents enjoyed a per-capita income twice the national average? Nothing, and I’m so sick of her already that I refuse to say anything else.

Moderator
PS: Also, BernCar, I do agree with you about the disparaging of entire generations. I have a post or two or three coming as a review of the 2 books "Generations" (1st book) and "The Fourth Turning" by Strauss and Howe. I really have thought about this since the blog started, in fact. Part of my problem with their sorting out of all things generational is that one can cherry-pick any example of a quote or event from history to support any view of these generational "cohorts" one wants.

If each generation was really "this way" or "that way" on a lot of traits or behaviors, it'd be very obvious. There is no exact cut-off line either.

Maybe for Mr. Goad, the title just was too good to pass up.
Moderator
PS: Ha, after I read the 2nd comment first, I'd then though you wrote about a degree in International Libations. (At least that'd be more useful to the public.)

50 years ago, a 28 y/o in the position Miss O'Cortex is in would have the maturity of a current 45 y/o and the knowledge of politics and history of at least a Rand Paul, as a random example. This one is a ditz.
BernCar
PS: AOC's education, if not her experience as a barrista, should have been sufficient to warn her against upstaging her party's leaders. You never start a job by throwing shade on the bosses. It will be interesting to watch that wreck evolve.
BernCar
PS: Yeah, Goad is a sharp writer. He impressed me by disdaining the widespread practice of prejudice against every member of a generation (e.g. condemning all Boomers for selfishness or Milennials for indolence). I have a dog in that hunt, so to speak, and thus appreciate his perspicacity in that matter.

As far as Ocasio-Cortez (she now has enough fame to have earned an abbreviated sobriquet, AOC)--she has a degree in Economics and International Relations from Boston University and was the subject of a recent Fox News Opinion piece online entitled, "AOC, the Voice of an Ignorant Generation," justifying Goad's scorn of her as an "economic retard" though violating his precept about generational bias. Not being of her generation, I thought the headline was spot on. In an interview on "Firing Line", she "threw up her hands in exasperation...laughing, 'I'm not the expert on geopolitics.' " WTH--she's a graduate of a good school in Internationl Relations. I'd like to hear her answer the question, "What's the capital of Africa?"