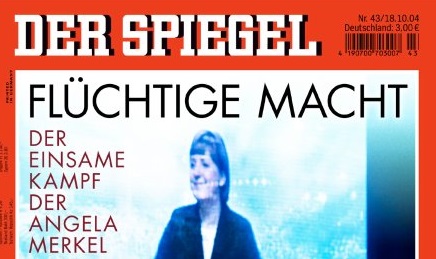 (not the same issue with this story, BTW)

As a matter of fact, the Germans have been using that term way back, since the mid-1800's, per Wiki,, well before Donald Trump coined it independently(?).
The Wikipedia article on lügenpresse talks about various political factions using the term to diparage the written press on the other side. (I am surprised no lefty has edited it out, but there is even a fairly-written paragraph on the use of the term to refer to the lack of coverage of the Cologne sexual assaults 2 years back on New Years.)

The man in this latest episode of the Lyin' Press revealed is on Claas Relotius, coincidently named like another man who is a complete fake. (Ooops, any 5 y/o Peak Stupidity readers, so sorry, but you were bound to find out someday.)

The first suspicions emerged following the publication in November 2018 of the article "Jaeger's Border" about an American vigilante group that patrols the border between Mexico and the United States.

Juan Moreno, who reported the story together with Relotius for DER SPIEGEL, grew distrustful of his colleague. Moreno also reported his concerns to DER SPIEGEL. He didn't relent, and he took advantage of a trip to the U.S. for reporting on another story to gather incriminating information about Relotius -- and also in order to take steps to protect himself, given that his byline had also appeared on the article.

After initially denying the allegations, Relotius finally confessed at the end of last week. It has emerged that he invented entire passages -- not only in the article "Jaegers border," but also in a number of other articles.

Let us not jump to assumptions that Mr. Relotius was JUST a complete liar. There may very well be some simple stupidity involved. Note, that he writes about these vigilantes. We did have some regular citizens at the US border looking to spot illegal immigrants, but they were not out to shoot them, and, oh , yeah, it was only about 12 years ago. That was the Minuteman patriot groups that I fully supported (only work obligations prevented me from making an effort to join up). Did Mr. Relotius read a 10 - 12 year old article off the web and miss the date? Things like that happen.

It's hard for American to think of Germans as dumb, as we are more likely to picture wire-rimmed-glasses-wearing Dieter from Sprockets:

So, though modern Germans may be weird to us, their intelligence is not usually questioned. After all, anyone who can pronounce Goethe and Nietzsche correctly, much less read their writings, has gotta have something on the ball, right? However, what we've got to remember is that we're talking JOURNALISM here, the mainstream of which contains graduates of one of the easiest majors in college, most of them innumerate, some with no knowledge of history. Why'd this Relotius Claas make up stuff out of whole cloth? Did he think no one in Germany, reading Der Spiegel, could/would see through his BS, or did he really just come up with this view of Americans out of laziness and stupidity?

It is good, but maybe a little surprising, to read that Mr. Claas' colleague did the leg work to debunk Mr. Claas. Behind every one of these fake journalists ratted out, though, how many more are making things up as they go along, and not being found out?

Moderator
PS: Yeah, BC, I was about to mention some other majors, and you are right about the Ed. majors. My story is having 2 couple of Ed majors in a graduate class in Weather/Climate with me. At the end of a whole damn semester they had evaporation and condensation backwards. Yeah, everyone got at least a B....

I think that journalism as a mission bit started with Woodward and Bernstein's take-down of Nixon. It was not about reporting anymore, after that.
BernCar
PS Journalism majors and education majors are the two dumbest groups of undergrads in the modern university (that is, of course, excepting any Grievance Studies students). My experience was in teaching math to education majors a couple of times, and I was struck by the invincible ignorance of the typical student. Most of them were too dumb to even know that they didn't know, and the ones who were dimly aware of their innumeracy were convinced it was owing to lack of proper pedagogical technique of the part of the instructor.

Journalism majors I ran across were exactly the same--they were on a sacred mission, flattering themselves that their job was to "comfort the afflicted and afflict the comfortable". They occupied the high moral ground, you see. What a crock of bullshit!