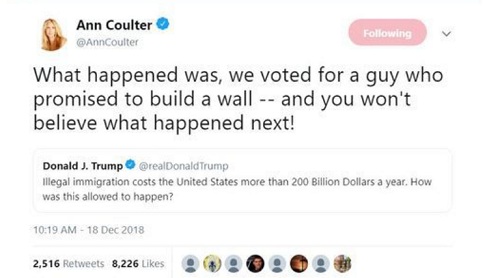 Peak Stupidity does not have a tweet recevier, or whatever you need to tune in to get these things, but our perusal of VDare.com yesterday showed the tweet above, along with our #1 written-pundit's ass-ripping article . I'll tell you, I still remember when Miss Coulter was kind of a go-along-with-the-crowd GOPer, way back before 9/11/01. My, she has grown! Please read the whole column, as I'll just excerpt a small bit:

Maybe I'm a literalist. A zealot. When people kept telling me to be patient—the wall is coming!—I nursed a private hope that I was wrong, and they were right.

It is now crystal clear that one of two things is true: Either Trump never intended to build the wall and was scamming voters all along, or he has no idea how to get it done and zero interest in finding out.

Yeah, she may have been just a bit more naive than this writer. I've written before, in When did the Feral Government get out of control? (pt 1) that it was a far back as 1995 when I had any optimism that the power of our Feral Gov't would be diminished or used for good. In the time since, now more than 2 decades, I've just not seen anything get better. Every major change in policy has been for the worse. Why would I expect anything seriously helpful to Americans to happen with President Trump in office? I didn't change my story overnight here. I still think that his use of the modern, tweet-based bully pulpit is good, and he meant to do good. I just never really saw how it was going to happen.

In answer to Ann Coulter's question above, nope, I don't think Mr. Trump was scamming the voters. It's the latter factor - he doesn't have any idea of how to get things done. I've written over and over now, that if the President had picked loyal trusted advisors and department heads, he could have had them take care of the hard thinking and planning. Something really extraordinary, policy for the good of regular Americans could have resulted. He didn't do that, and that hasn't happened.

There just wasn't much time for writing this evening, and if Trump has lost Coulter, his biggest fan, I don't know what to tell you that isn't bleak. However, VDare writer James Kirkpatrick has some more wonky optimism in Time For "Cocaine Mitch" To Deliver; House Passes Wall Funding Bill, Goes To The Senate*. Mr. Kirkpatrick reckons that the President might have read Miss Coulter's tweet (what power she's got!), and who knows? Maybe you have to keep shaming him to get anything done.

One thing that the reader must understand after reading about this wall funding, including Mr. Kirkpatrick's article about the details of the money, is this: IT! IS! NOT! ABOUT! THE! MONEY! As Peak Stupidity back-o-the-envelope-calculated almost 2 years back construction of a serious border barrier and maintenance of the same would incur charges of roughly < 2 hours of the yearly $4,000,000,000,000 US budget one time, and then < 1 hour's worth yearly, respectively. That is assuming the usual cost overruns and corruption, too. Those that block any serious border control are not worried about this chump change. They want open borders, so arguing about the money with them is just futile.


* I couldn't help putting in this title here. "Cocaine Mitch"? That's kind of funny, as it doesn't really seem to fit for this guy that reminds me of a terrapin ... OK, maybe a tortuga to be charitable.

Moderator
PS: Wait, what, she does to some extent (get it "extend"). I love her for her mind, but other than that, I'm usually considered an ass-man, myself. I've had a number of people tell me that directly "Hey, Peak Stupidity, you're an ass, man!"

Merry Christmas, BernCar.
BernCar
PS: Give 'em hell, Ann! I feel about her like a WWII aviator felt about his Thunderbolt--"If that P-47 had tits, I'd marry it".
BernCar
PS: