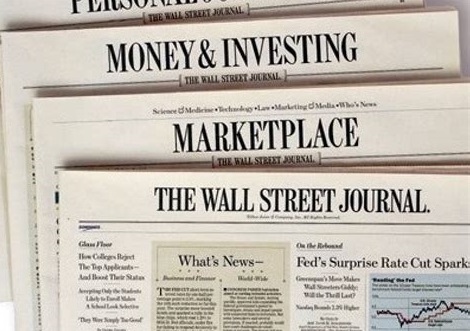 Back in the day, the Wall Street Journal paper newspaper was seen by me as a fairly-erudite information-packed part of the mainstream media*. There was a 1 1/2 year period during which I made an effort to buy the paper version at an old-fashioned newsstand/store on the way home from work, my goal being to learn more about business. I enjoyed my routine of trying to learn from this newspaper, except from that Money and Investing section, which was damnably boring until I realized it was also full of trading-advice via after-the-fact explaining by a bunch of bullshitters. I quit reading that part, and I am happy to say I never took any investing advise from this newspaper.

The other 3 sections were interesting enough for a while, especially the occasional, often-humorous, story on small business. I would save the editorial section for last because I enjoyed it back then. I was fooled by the "conservatives" who wrote in, with the exception of a nutball lefty named Al Hunt. Was he on there just to piss the readers off? I don't know why else he was. The immigration stupidity, especially as espoused by editor Robert Bartley, was just beginning to kick in for me at this time.

Well, the price of a paper WSJ went up by a quarter one day, and, as economists who could tell you about demand-elasticity very well know, my demand was about as elastic as pair of underwear worn for five years by that fat chick that gotten taken out by that Dodge Challenger** in Charlottesville. That is to say, I quit reading what I then considered a rag, the extra quarter just being the straw that broke the Lyin' Press's back.

What the hell this post is all about is, that I happened across a paper version for some post I thought I wanted to write, and subsequently read an excerpt from the WSJ also. These writers still do the same thing: They write numerical changes in their verbiage in the WRONG ORDER! "Ass-backwards" is the term of art. It's been like that since I read the paper daily, and it's irked me the whole time. It's like this: "Due to the latest FED announcement by Mr. Yellen, short-term treasury yields dropped sharply today, to 2.71% from 2.86%, and we coulda' told you that ahead of time yesterday, but nope, you wouldn'a believed us.". Note the "to" BEFORE the "from". "Trading volume on the Big Board rose slightly today, to 2.16 billion shares traded from 2.13 billion shares." What the hell is wrong with these people? That's my beef today, but this has been happening for a long time.

Look, you dipshit writers, we read from left to right. That's the way numbers should go to. Picture a graph in your head. Got it, WSJ writer?! The Peak Stupidity reader is right now reading this post to the right side from the left side. How stupid does that sound?

I think this style has been picked up by writers outside of the Wall Street Journal. They would like to emulate this pseudo-erudite style, and additionally are mostly too innumerate to even notice what's wrong with it. For years later, not due to my having taken*** the paper copy (I don't see how) subscription offers would come in the mail, every 3 months or so. I would dutifully put them in the nice post-paid envelope they provided me with, with the words "FIRE AL HUNT! Then I'll think about it." or "Close the borders!" across it. Some poor Filipina girl, at a mail-opening facility in Manila, may have learned something, I can hope, from my demands, but those Editorial Idiots at the WSJ have gone TO more clueless FROM clueless.


* Looking back, that would have been my term too, as opposed to those that are more accurate now, the Lyin' Press, Government-Media, or the System Media (h/t James Kirkpatrick of VDare).

*** Now, that's an interesting phrase you hear from old people, from the day when people "took" Time Magazine or "took" Better Homes & Gardens. To "take" it meant, as in, having a subscription. In my WSJ case, I didn't "take it" unless I was missing a quarter!

Moderator
PS: First, thanks for catching that. I couldn't even think of it the WSJ way while I was writing. Anyway, it's just a pet peeve, but once you notice something like this, you'll see it everywhere.

I'd never heard of that term "hedcuts". Thanks. That was pretty old-fashioned looking, but it gave the WSJ a certain look that I also liked.
BernCar
PS I had a very similar experience with WSJ. I was taking a grad business course and prof had everyone take the WSJ at a discounted subscription price for discussion in class. (In my defense, it was the only grad business course I ever took and it WAS in accounting, so I don't feel terribly embarrassed.) I liked the editorial page same as you, but that was before I understood the term, "Neocon". Also, the sort of retro woodcut portraits they used (Wikipedia says they're called "hedcuts") appealed to my sense of having been born fifty years too late. Just another rag of the System Media though.
I never noticed the ass-backward verbiage at the time, but it does seem a little clunky. By the way, your first example of that ("Mr. Yellen") has the "from" before the "to", opposite second example.