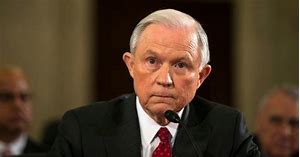 We're tryin' to keep up with current events here, so I meant to write this last night. As I keep saying, this is not a news site, but still, I did have something to say about Jeff Sessions and his resignation from the job of US Attorney General (meaning head of the cabinet level Dept. of Justice).

The feud between the President and his own appointed Attorney General is below my pay grade. I don't know all the details. Many had high hopes for former Senator (R-Alabama) Jeff Sessions on the immigration front, as, per Ann Coulter, who ought to know, he was extremely beneficial to Americans as a Senator. To me, Mr. Sessions was one of President Trumps best picks, though, I guess he could have done more in a position more directly involved with immigration. John Derbyshire wrote I Support Sessions vs Trump—Because Mueller Is A Disease of the Skin, Immigration A Disease of the Heart 2 months back. There are many good arguments back-and-forth in the 59 comments thereunder that lay out some of the specifics.

To read more arguments made after the resignation (or firing, as the case may be), one can the > 200 comments under this one-line Steve Sailer post from last night.

Read it all if you care, but I do have one specific beef with the outgoing Attorney General, and that is about something that is very much in his job description. The unfair "justice" meted out by local, state, and other law enforcement after the Charlottesville, Virginia attacks (see also here and here) on peaceful defenders of Southern landmarks was never investigated by the D.O.J. under Jeff Session, under President Trump. It was well within his purview to look into this and put a stop to some of the anarcho-tyranny that's been increasingly being implemented throughout the land. Here you get the guy you've been hoping for, for at least one high position in the executive branch of the Feral Government, and even this guy won't fight for the rights of Americans. Just on this point alone, I say go on home, Sleepy Jeff.

Will Kris Kobach get appointed to the position? We can only hope. The ctrl-left is having a collective shit-fit over the President appointing a temporary AG until a decision is made, as if that's something out of the ordinary. Hell, didn't Øb☭ma have a temp. in for quite a while there? That's just business as usual, and if that pisses the left off, and they are pining for Jeff Sessions, that's another reason that I'm glad he's out. We need a fighter, not a lover sleeper.

Moderator
PS: I remember the fake wrestling, oops, wrastling. I knew it was fake the first time I saw it, as "how could the guy just keep coming down on his neck like that, but just miss elbowing his windpipe, so the guy can keep getting up?" and "I don't see how those cables enclosing the ring would really bounce the guy back like that!?" would come to mind. You know, stuff like that. My brother didn't agree ... for a while. Yeah, that's besides the point, but I got your feeling on that. If national politics is not purposefully rigged, they sure know how to play together anyway to fake out most Americans.

I think the Anarcho-tyranny that you discuss in your 2nd paragraph is at least fairly recent, maybe increasing since the 1990's. It seemed like through that time, even if the system was out to get you (local level, at least) there were enough people with integrity to give you a fair shake within the system.

"What happens when people give up on voting or even having their voices heard with a decent respect for differing opinions?" Unfortunately some will just give up and live under the thumb of the elites, a very un-American thing for sure. As to the others, well, it's been coming for a long time. "They" (meaning "the internet") say that "Those who make peaceful revolution impossible ..." and all that.

Oh, it was from one of the Dead Kennedies - no, not the band.

BernCar
PS I agree with you on the one-sided justice meted out in Charlottesville, and the lack of justice meted out to Antifa, etc., in other places. Somebody is kidding us, PS. I'm beginning to feel the way I felt as a kid watching pro wrestling on tv, screaming at the referee because the bad guys were cheating in the tag team match and he should have seen it. Why are the bad guys getting away with it when the "good guys" head the Justice Dept? I'm wondering now if it's the same old kayfabe, but higher up. Much higher up.

How come the same crooked election officials in those old familiar places keep getting away with it? Why do some people get to ignore legal injunctions with impunity, and others get the book thrown at them for the legal equivalent of jaywalking? Is the system rigged? What say you? What's the point of going through these kabuki theater elections? What happens when people give up on voting or even having their voices heard with a decent respect for differing opinions?