For want of a rubber washer, 45 minutes was lost. 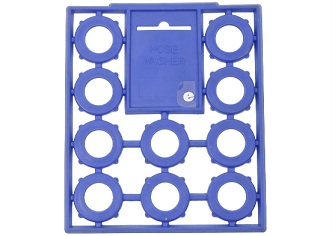 That is an excellent nursery rhyme, best for the children older than 8 or so. Things do go like that. There I was today, with no rubber washers aka hose face seals, but, having heard the nursery rhyme somewhere (did Mother Goose even HAVE a blog?), I didn't want to let things go that far with hooking up a washing machine - better get new ones for both hoses.

First of all, it's worth explaining to the young ones, that if you don't know where you put something, then you may as well not even have it! That was the case here, but again, to avoid bad consequences I figured I'd better get a pack of these 10 - 12 ¢ items or risk a leak: For want of a rubber washer, a good seal was lost, for want of a good seal, the subflooring was lost, etc, etc. This curmudgeonry post is more about the journey than the washers.

On the way to the nearest hardware store, now 3-4 miles away, when it used to be 1/2 mile, I dropped by the grocery store just in case that had some near the light bulbs. No go, but then I ran into another parent and chatted for 10 minutes about the kids. Once finally at the hardware store, I noticed that the guy was remodeling or something ... nope he is closing up in a month. (This is very pertinent to the Peak Stupidity posts written a year back on the decreasing infrastructure for Do-it-yourselfers and tinkerers in America, as opposed to in China - China vs. America and the local hardware store and DIY and mechanical aptitude in Americans vs. Chinese - self rebuttal) Oh, a guy bought him out of rubber hose washers yesterday, as everything was 25% off. Great.

It was off to the big-box store then. Besides taking 5 minutes to get in the store (vs. 15 seconds at the hardware store) it took 5 minutes to get to the right department and aisle (could have been in plumbing, right, but nope, gardening). Oh, then it was not too bad, only 1 minute in line to pay, though it could easily have been another 5* (vs 30 sec at the hardware store).

45 minutes later found me installing these simple items in the proper places to prevent this kingdom being eventually lost due to water damage. America's manufacturing infrastructure at all levels is declining. This is a small part of it, spending 3/4 hour getting a small ubiquitous part that, well, should have been on my shelf. You've gotta be your own hardware store anymore. Inventory, bitchez!


* Yeah, nobody was doing fancy-assed transactions (see middle paragraph) at least, just paying money for stuff, per the original idea of a store and a check-out lane.