The Coming Out of Lindsey Grahamnesty? 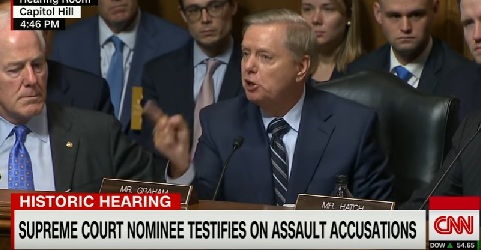 It's a week or two since the end of the whole SCOTUS "advise and consent" drama, but there's a reason it's still pertinent to discuss this guy, Miss Lindsey Grahamnesty, or Senator Lindsey Graham, I'll start calling him, if I actually end up believing he's a decent guy 2 or 4 years from now. Time will tell, and that's what this post is about, rather than specifically about the Senator's "spirited" defense of the S. Court nominee, Judge Kavanaugh. (I honestly forgot this judge's first name just now, so let's just call him "Judge".) Could Peak Stupidity have been wrong in our number of posts decrying almost all politicians at the high level as psychopaths who don't give a rat's hootie about Americans and their future? Did Senator Grahamnesty just come out as a real conservative, not the Neocon hack he's been for a coupla decades?

I'll say again here that I don't watch any TV, but a friend suggested I watched just the 4-5 minute video of Senator Grahamnesty's rant during those hearings. Yeah, it's uplifting to hear someone tell some truth and stand up against the ctrl-left and feminists for a spell. I can't tell if it's just an act for sure. I believe it is, but more on this shortly. Because, I haven't watched any TV in some time, I'm used to getting the news from where I want on the net. In general, I think that's better. The politicians and their Lyin' Press department can act and lie all they want, but all I get is what they said, along with what they did, or what actually happened later. I really believe things would be different in politics if people did this, and the TV was not a factor - a guy can dream, can't he?

However, there is a lot to be learned from our intiutive senses upon watching these people run their mouths. Many people can get a good sense of the truthfullness, or lack therof, from verbal and nonverbal ques. Write what you think in the comments (PUT "PS" first!). My opinion, especially after the 2nd viewing, is that the Senior Senator from SC was PROBABLY acting. Yes, it would have been a good acting job, better than any laymen could do, and better than most actual actors. However, politicians are WAY BEYOND the level of the Hollywood movie people! Acting is pretty much their live's works. These people have high degrees of a quality one may readily call psychopathy.

Mr. Grahamnesty sure sounded like he was on our side. Peak Stupidity itself wondered, a few weeks back, when this farce was still going on,

Even though I know they want to cuck-out (most of the R-squad of The Party), I wonder if these guys are thinking “hey, if that made-up ridiculous story ends up derailing this nomination, imagine what will happen if the press learns one little inkling of my past at college… or, uhhh, last year, for that matter.” Lots of the anti-Trump GOPe may be trying to work in cahoots with the D-squad, but they could be smart enought to realize that, NO, they are not safe, come election time.

This same stuff can be trotted out against any one of them, just to get a ctrl-left, or non-white of any kind, in office 2 or 4 years from now. Ask not for whom the bell tolls, white members of Congress. They would be wise to put a stop to this business, even if only out of self-interest. Miss Lindsey is probably the best example of this, and Miss Grahamnesty’s position has been a SURPRISE! SURPRISE! SURPRISE!

Was he really as irate as he looked though? It's not like he is in any danger of being #metooed by some young lady, IMO (pound-me-too! by other than a lady, well, ...*). Something tells me that a general consensus was formed, whether by a real plan, or just a general feeling, within the Red Squad of The Party that Kavanaugh was going to be OK for the Feral Gov't's purposes. Mr. Grahamnesty's tirade sounded contrived to me. I really wish it didn't, even if that does go against a number of things I've written on the Red Squad/Blue Squad concept. I'll continue on this in the next post on the "coming out of Mr. Grahamnesty.*


* OK, Peak Stupidity does have a habit of giving anyone we don't like a lot of grief with whatever insults we can come up with. We freely admit to that. It comes under the strategy of ridiculing those who are indirectly out to get us. That's why I wrote near the top that if this Senator has acted like a conservative by his next election, I will quit giving him grief verbally on this web site, and call him by his real name. It takes me a long while to forgive things like trying to amnesty millions of illegal aliens.

Moderator
PS: Yeah, BernCar, my skepticism is pretty deep at this point. I am not the woman with the intuition to just look at the guy and say he was acting, but I'd put SOME (not all of my) money on it.
BernCar
PS: Yeah, I was happy to see reports of his jeremiad against Judiciary Committee Dems, but when you've been screwed over as much as we have by so-called conservative Republicans, skepticism is probably the right course.