A quote, one by two, unquote:

In our very first economics post, Inflation by Deflation, Peak Stupidity concentrated on Dannon coffee-flavored yogurt (guess I was kinda hungry at the time for 6 OUNCES, dammit) In The Destructive Power of Inflation we mentioned ice cream (also pretty tasty, so ...) In On Inflation, Oil, and Roofing Shingles, however, I wrote that it's difficult for the manufacturers of the major building products to do the same thing, that is, reduce sizes for the same price items in what I'd call cowardice by the marketing people.

Roofers, framers, and other tradesman have worked with certain standard sizes for a long time, and those sizes make for standard methods and structures. Roofing shingles, for example are now made in metric (SI) sizes, but they will only be used with others in those same unit on the roof. It'd be a problem to repair a metric-shingled roof with English unit shingles in 3-foot sections. For either unit stuff, though, were they to be shortened or narrowed by even a little, that would truly make trouble for roofers' calculations. It's still not so bad in their case, as they don't have to really fit with the rest of the building materials. A new roof could be made, but roofers don't like math that much.

BTW, I have read about the "inflation by deflation" of this lumber as having happened in WWII times or so, but I measured lumber in a 60-odd y/o house that is in between. It was either 1 7/8" or 1 3/4", though I believe it was the latter.

The thing is, I figure the corporate marketeers can't change these without big, big problems and pushback. They are used for framing of houses, the heart of residential building. If you reduce the 3 1/2" side even a little, that would mean house wall thickness change. It would make home repairs and upgrades a real bitch. (Yeah, one COULD use thicker drywall to match, but... nah,...). For both dimensions though, especially the 1 1/2" one, building codes would have to reflect these changes, as this would make the bending and buckling calculations built into the codes wrong. Structures would obviously be weaker, but I'll go into that more a bit later. If more "2 by 4's" were needed, at closer spacing, for the same loading, that would wreak havoc on use of the sheathing materials.

Plywood, drywall, paneling, and other sheathing material all come in 4 foot x 8 foot sheets. They can't change that either. That would screw up even new houses, though providing extra work for architects and engineers.

Finally, let's get to the reason I wrote this post - "One by's". Yeah, they haven't been 1" thick since I've been aware of my surroundings, but always 3/4" thick. If you want wood that's 1" thick, you've got to go buy "Five Fourths". That's just getting stupid, when you think about it, but I guess the building supply stores really didn't have another option for a name - "Real One By" lumber would make one wonder about the other stuff. OK, I'm used to 3/4" thick x 1 1/2" wood for use in outdoor table tops, etc. I hadn't had a use for the stuff in for long time, but I bought some recently. It looked a bit thinner, but then I'm a curmudgeon and all, so I should give them the benef... 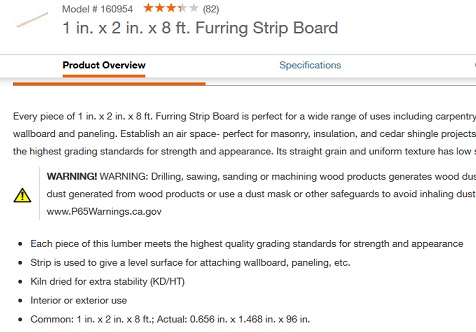 Look at that fine print! (OK, yeah, I had to reduce it for the blog.) That 0.656" thickness used to be the 0.75" (3/4") dimension! I see even the width is less than 1 1/2" now. The difference in thickness is quite visible, and I measured it to check. Yep! BTW, it's not an odd number, that 0.656", it's just 21/32" - closer to 5/8" than 3/4". This is no small difference. To explain that, let me get to what I promised higher up here. This material will usually be used in a way that loads it in bending (as opposed to axial loading, etc.) As much as I want to get into the formula to explain, this post may have hit the limits of our reader's boredom tolerance already. I'll boil it down to this: In bending the "strength"* goes as the square of that thickness. This new, deflated, stuff has < 77% of the strength in bending as the old stuff. There's your inflation.

Do these marketing bastards really think that nobody will notice this stuff? It's not even the hidden inflation, due to the fact that they were too cowardly to just mark the price up, that perturbs me the most. It's that I've got to rethink what I want to build with, and I can't repair old stuff with the new... oh, maybe they are brighter and more evil than I thought.

* I put "strength" in quotes because that usage is accurate but not technical. Technically, the highest stress in the wood in bending occurs at the outside, it's this stress that goes up inversely with the square of thickness (linear with the other dimension, BTW). We should think of the strength of the material as a property of the stuff, whether, in this case, say yellow pine or poplar. We end up with higher stress in the same strength material which means colloquially "lower strength".

Moderator
PS - Yeah, regarding the wood again, what pisses me off the most is that the new stuff doesn't fit together with the old. The small table I made with it (as the top) looks appreciably less solid. I'd like to go back and ask if I can get actual 3/4" by 1.5" (the 1.5 could be a bit smaller still). I guess you'd have to rip the wood and then bevel it to get something to match the old stuff.
Moderator
PS - I do remember the small price tags stacked up, sometimes 3 high! I am glad to be able to see per/unit costs on the shelves below the items too, though it was good for your math skills not to have them - very helpful for development of in-the-head quick estimation. Or, yeah, most people were to mentally lazy or would not care.

It sounds like you know a little solid mechanics, Mr. BC. I didn't want to go into technical details for boredom/exessive length's sake. The area moment-of-inertia goes as the cube of that thin dimension (of a rectangle), but the stress in bending goes as linear with that dimension. For buckling, now that you mention it, it's an instability problem, not stress, so the critical load for buckling on anything made by the "1 x 2" would be only 67% of what it was with the thicker, "normal" sized pieces. What a rip!
BernCar
PS As one who lived through the raging inflation of the seventies, I am ever alert to the shave-the-quantity scams (otherwise known as the old thumb-on-the-scale maneuver) when I'm shopping. As you have previously mentioned, merchandise that had been traditionally sold by the pound like coffee and bacon began to be sold in 12-ounce sizes back then and it took a while for consumers to notice. Ever since, Mrs. BernCar and I are big on looking for unit cost on price tags. Hell, lumber prices have gotten so high that I never thought to look at lumber dimensions being cut like that. That furring strip reduction is quite a hit in stiffness looking at area moment.

BTW, I can remember my brother being overjoyed at getting a 10% mortgage rate on his house. At the time, it was considered quite a coup. My mother actually invested in a CD that paid 20% interest for a short period.

Prices went up so fast that grocery stores quit using the old ink stamper to put prices on merchandise, and began using pricing guns with paper labels. If the price on a loaf of bread went up before it could sell, the grocer just put a new label over the old one rather than having to remove the ink.