Grasping at Straws - Update from Starbucks 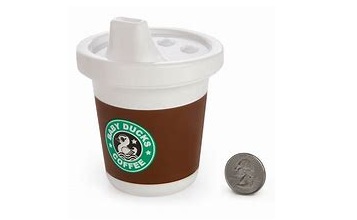 Yes, Starbucks has relented to the pressure from, like, one guy or something(?), who has been grasping at straws, successfully as of late. Here at Peak Stupidity, based on just a few simple calculations are pretty sure this has been a strawman argument that has now been milk(shak)ed for all that it's worth. OK, punditry aside for now, we will spotlight this latest installment of stupidity.

Per this Wichita Eagle article (why this site - cause it came up first and loaded quickly), Starbucks will now resort to the dispensation of sippy cups to grown adults due to that intense pressure from TITB ( The Idiots That Be ). The first sentence of the article states:

If you were like many other kids, you probably stopped drinking from a sippy cup when you were 3 or 4 years old — and you probably never had coffee in your spill-proof cup.

I guess I was not like many other kids. This writer's name is Kaitlyn Alanis. Has anyone named Kaitlyn made it to adulthood already? Time flies, or maybe she hasn't.

Anyway, Starbucks management, per this story, dispenses a billion straws annually, which is just 2 x that one guy's estimate of straws used (or at least thrown out) daily. That comes out to Starbucks holding 0.55 % of the straw-sucking market, not really enough to make a dent cavitation, but it FEELS GOOD to management. One can't help but wonder though, especially if "one" is a technical or engineering type, how much extra plastic will be used to make each lid into a sippy cup lid. Is that amount GREATER THAN or LESS THAN the amount of plastic in a straw? They didn't seem to give any dimensional details, those Starbucks whiz-kids, and Kaitlyn Alanis is surely not the type to pass them on either.

There are a couple of tweets about this move in the article too, how bout that?:

I got a sippy cup at Starbucks this morning...I swear I’m an adult.
pic.twitter.com/UdwLxER3Ss
— KitTeaCup_EME (@KitTeaCup_EME) July 6, 2018

Keep in mind that Peak Stupidity does not take too kindly to tweets, as we feel people who tweet like this are the ones who should be using sippy cups for all meals, not just coffee-time.

Though this move makes Starbucks management feel greener than a pile of minute-old doe droppings, I don't know if the customers will feel the same. Hey, I wrote already that I don't use straws much, as they seem kind of juvenile themselves. However, I never was a drive-thru guy either and don't get the whole essence of coffee - if I'm gonna drink it, it's usually while sitting down. Don't get me wrong though, I do understand those who are on the move. The lid and straw are necessary, and now life just got a little stupider for lots of Starbucks customers. For some that are already sick of Starbuck's ctrl-left bullshit* this latest move may just be the straw that broke the camel's back. [OK, that's the last straw, I'm warning you! - Ed]

* The Peak Stupidity blog had a few choice words to say about Starbucks regarding raising hell about their nationwide, synchronized struggle-session back in the spring.

Heidi's Master
PS, You are the funniest dude without a Comedy Central special! Your fan club will be meeting at the Starbucks @8:30. We will be celebrating this your latest emission.