The Chinese are not happy with their > 20 year-long unfair! trade deal with America 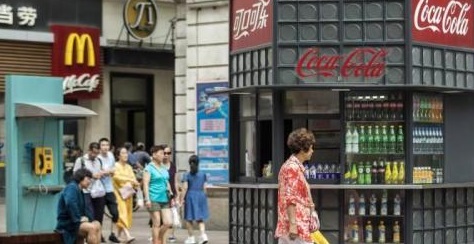 Zerohedge articles, even if they are not really that intelligently written, are always good for the comments, provided the topic is ripe for them. 5 days back (yes, I know... no, we don't care) ZH posted:"Worst Case Scenario" Looms As Chinese Overwhelmingly Ready To Boycott US Goods In Trade War. At least they put "worst case scenario" in quotes, because that's a humdinger.

Man, since Bill Clinton sold out American manufacturing in the mid-1990's for some bling from the poontang dynasty, or something undisclosed, the Chinese have been getting one hell of a favorable deal on trade between our countries! I don't say that just due to what the HUGE deficit with them is and has been, but if you know something about the import/export business, you know that it's not at all fair, favoring China greatly. Someone thought it would be good to lift them more quickly out of their hole dug by hard-core Communism. Hey, they would have been OK in the long run, as long as there were no other Maos and Misses Maos, but our policy just eviscerated American manufacturing, that was on a much more slight decline, as it was before this move.

Peak Stupidity has never had that much admiration for President Trump as a "deal-maker". That's not all that is needed to even try to MAGA. However, he does know a bad deal when he sees one. He also probably realizes that, corporate political posturing aside, we have lots more to gain than lose by adding tariffs and tying to make our trade with China more fair. We appreciate his effort on this matter, as it is one in which we need a deal-maker not a sucker on behalf on Americans.

The Zerohedge writer seems to worried about the Chinese being upset about the matter. I don't see a problem. What are they going to boycott, for cryin' out loud? KFC? McDonalds? It's just as well - they don't know how to cook that shit right to begin with over there - too much soy and vinegar doesn't make a Big Mac taste like "2 all beef patties, special sauce, lettuce, pickles, onions on a sesame seed bun" - yeah it's that "special sauce" - ancient Chinese secret, huh? Seriously though, America does have manufacturing, but most of it is NOT consumer goods headed to China. (Yes, our industrial shipments include, of course, those Boeing aircraft, which the Chinese are trying their damndest to copy, and will not need Boeing soon enough.)

Most of what we ship over there is commodities. Lots comes over not on container ships but in the holds of bulk cargo ships. I've seen those big grain elevators in Seattle that hold the crops from E. Washington and the Idaho Snake River valley transported via hopper cars, then loaded with a huge-ass hose into the holds. Maybe the Chinese CAN produce more of their own soybeans, wheat, pork, and (in 50 years, when it can all grow back some) lumber to make furniture to ship to us. However, the price will be much higher. They can replace those imports with stuff out of S. America, Canada, etc., but these are commodities, so without our exports, again, the price will be higher.

So go ahead, pissed-off Chinapeople, do your worst boycotting and buycotting (see also Part 2, and Part 3). Throw those firecrackers, if you still know how to throw after playing soccer, ping-pong, and bad-freakin'-minton all your lives. You all have had one hell of an unfair advantage for more than 2 decades. You have no reason for the indignation other than ignorance and stupidity.

I am not in 100% agreement, but here is a typical on-the-mark comment on ZH, this one by one "Harry Lighting" of parts unknown:

You hit the nail on the head. The Chinese people still need to eat, and if they stop importing US food, they will have to buy the same food from a middle man country that buys the American food, marks up the price, and sells it to the Chinese. Result : rampant food inflation in China.

On top of that, a country that is starved for capital because of all the debt it has piled on while accumulating trade surpluses would see half a billion dollars a year of capital drained from its vaults as its trade surplus turns negative.

The difference in all this is that the Americans can produce internally everything they import from China, but China cannot do the same. Food is at the top of that list. So while Americans would see an increase in the cost of the goods they now import from China, that would be offset by the huge savings of capital by reducing their trade deficit, along with the multiplier effect of the money spent domestically staying within the boundaries of the US. Wages would rise and then consumption would follow suit, providing a strong impetus to their economic growth.

China on the other hand would lose capital as they would see their trade surpluses reverse into deficits, and would have an inflationary spike not offset by rising wages. Consumption would plummet and production would follow suit.

Frankly I am surprised at the economic ignorance being displayed by whatever Chinese government officials who are providing source information for articles such as these. The Chinese should be shutting the fuck up, accepting the initial round of tariffs without saying a word, and going on to enjoy a continued substantial trade surplus with the Americans albeit at a lower level of profit.

Instead, these officials are letting their nationalistic egos get in the way of more intelligent responses, which in the end will destroy their economy.

I chalk this foolishness off to inexperience on China's part with respect to trade differences. In the twenty five years that they have become an exporting power, they never had to deal with difficulties between themselves and the clients to whom they export. They have been treated with kid gloves, basically being allowed to sell anything they wanted into America without any obstacles. So now that they have to adapt their trade policies to a more difficult situation that challenges their unfettered access into American markets, they are caught like deer in the headlamps., not knowing how to respond. It is in such times that emotion takes the place of wisdom honed by experience, and truly catastrophic mistakes are made. That is what is developing in China today, as evidenced by the report in the article above.

What surprises me also is that the Chinese nationalistic fervor, fueled by a desperate urge to be seen as a world leader in trade who can dictate the rules of transaction, is being allowed to get in the way of what many of the younger Chinese government bureaucrats were trained in American and European universities to know is the wrong response to tariff imposition. It just shows that China remains ruled by the elders, one generation removed from the revolutionaries, who feel more comfortable relying on their revolutionary reactionisms than on classical economics that were taught to their sons and daughters.

This is typical of young dynasties, they always make some critical growing pain mistakes as they develop a history. How they recover from such mistakes will determine the prognosis of their governance. The Soviet Union approached such a crossroads in the 1950s when Stalin passed, and they adapted to a new paradigm that differed sharply from the Bolshevik structure that Stalin had enforced. In so doing it allowed their dynasty to continue, only to make a lethal error some 30 years later when they faced their second major test and failed.

Many of the countries that embraced communism in the post war era ha d similar challenges and failed them. Castro's Cuba and today's Venezuela are classic examples. Depending on whether the Chinese come to their senses before it is too late, they may be the next developing dynasty to implode over a critical error. The next few months will reveal that outcome.

A beyond-broke country like America can't keep working within an unfair trade environment with the 2nd, soon to be 1st, biggest economy in the world. What can't go on, won't go on.

Moderator
PS: I've heard of what you related here, Dave. The sewer grease thing is just gross, though I suppose not any worse for your arteries ;-}

Yes, America (and Oz, I dunno) may have just as much corruption in government, but the cheating at the small business level in China just shows a total disregard of anyone besides the immediate family and close friends.

The one that really amazed me, Dave, is some story about vendors selling eggs made out of concrete rather than actual chicken egg. I just don't get how the hell you come out ahead on something like this!

BTW, I don't say the US is all rosy in this regard either, as I have a post coming about my experience at a small business - nothing like China, but it was just some pricing BS.

Thanks for writing in, Dave.
Dave, from Oz
PS "Maybe the Chinese CAN produce more of their own soybeans, wheat, pork"

Check out the stories relating to Chinese coming to Oz and bulk-buying infant formula. Why do they do this? Why does Australian infant formula sell for big bucks in China? Because they know that their food is not safe to eat, and not safe to feed to babies.

Corruption at *every* step in the chain. Adulterants, substitutions, rotten food disguised with chemicals, every scam that food sellers can possibly pull on a consumer is practised with gusto and complete disregard for other people's lives. Check out the videos showing street food vendors scavenging cooking grease from the drains.

China and its people are deeply lawless. Sincerely following the rules is for chumps.

Meanwhile in India, they have discovered that the tumeric powder nearly half the time has yellow lead in it.