Immigrants doing the Cannibalization that Americans JUST WON'T DO

There some pretty sick stuff that goes on in this world, and this country, but thankfully, it's still fairly rare. Some of the gruesome acts of violence though seem to be more original and sicker and most of these that I've read about have been performed by immigrants from various locales. (Yes, but ... but "the new cuisine!") Sure, we always had our babies born of the devil that'd start eating people on Day One, and the Texas Chainsaw Massacres, but those were movies, keep in mind. I think the gruesomeness has been bumped up to medium rare.

Speaking of chainsaws, then, Steve Sailer posted a link to the Los Angles Lyin' Press story Man Suspected of Attacking Wife with Chain Saw Was Deported 11 Times What I linked to is iSteve's quick commentary post and the reader comments. Because this is still a medium-rarity, and this just doesn't seem like what would go on in our own families, we can make jokes about it, and the comments contain a few good ones. I wish Zerohedge had covered this one - comments there would be hilarious.

First of all, what this "suspected" crap? I mean how hard is it to tell whether the wife was sawn up by a chainsaw vs. what? "Detective, what's this look like to you?" "Well, I'm no handyman, mind you, but the cuts are not straight enough for a table saw. I think most miter saws don't have the depth to get the whole torso. True, they've got those radial-arm saws now ... saw a great deal one last week at Home Depot, but I can't tell if it's just gonna be another piece of Cheap Chin... where was I? I'm leaning toward an 18"-bar Husqvarna at this point, until we, ahh, get more leads.".

The guy had been deported ELEVEN freakin' times! Yet, pundit Fred Reed says a border barrier don't do any good (when he talks his mock country and mocks his former country). I'm sure our "California man" here was coming for the great economic opportunities, but man, after that many economic opportunities, could he not have saved up just a small nest egg... enough to purchase a decent wood-chipper? See the nice midwestern folks would have done this job more easily, efficiently, and cleaner with a full-sized nice trailer-pulled model. Got a job to do, do it right, they'll tell you up in Fargo.. you betcha! 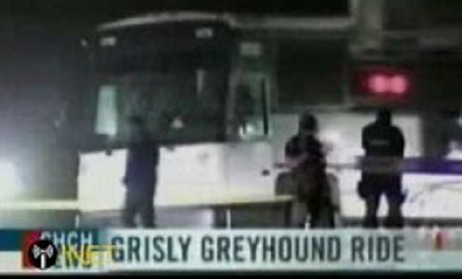 Further up into the Great White North, that's Canada, eh?, they've had their Chinese version of a gruesome killer. A decade back, one Mr. Vince Li not just stabbed a fellow passenger to death on the Greyhound bus, but beheaded the poor guy and then took the time to eat parts of him. He did all this while riding that Greyhound that was just cruising through Manitoba near Portage Le Prairie that night almost 10 years ago in a week or so. Shoot, about the worst thing that I remember while riding that hound long ago, was being told we'd have to stop for a minute and kick a guy off if he didn't quit smoking that joint in the back. Keep in mind, that up in Canada, guns are bad, mmkaaay? Therefore, there was no one on the bus who could have just quickly and safely put an end to this sick act. In the meantime, the driver just kept making the stops ...


OK, sorry, this was real - Vince Li was a schizoid, and apparently voices in his head told him that the Canadian 22-y/o Tim McLean was an alien (who the hell was the real alien there?) and a Bible verse told him so. 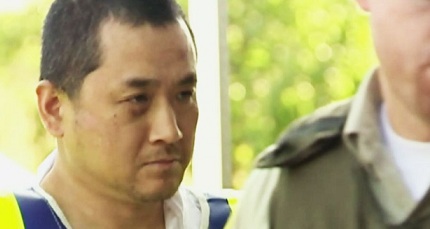 Mr. Li had NOT been deported yet, as I guess he was a schizoid doing a job Canadian schizoids just wouldn't do. What he HAS been however, is released from prison, only 10 years after this heinous crime, however. The Lyin' Press, Global Mail branch reports on this in a somewhat fair manner, while the next link I found, a Canadian CBC report from 6 years back, ALREADY TALKING ABOUT THIS GUY'S POSSIBLE RELEASE from prison, is just damn ridiculously oriented toward being "fair" toward this released psycho-killer, who, apparently, will not know happiness, but will be just fine so long as he keeps taking his medication.

The horrific nature of Li's act has demonized him in the public's mind, said Summerville.

The unjustified public fears about Li will probably keep him in a mental-health hospital longer than necessary, Summerville said.

Why all the fear, folks? They don't even have Greyhound buses anymore.

There are no easy answers to the many faceted questions that bombard both families and the media.

Wait, I GOT one - lethal injection.

Now, from the first article, on the release of the man now known as Will Baker (so's the neighbors won't know - "he's that Chinese psyco-killer") we read:

He'll be living not too far away from Tim McLean's mother,..."

I wonder how good Mom is with a sniper rifle?

Hey, we can make fun of Canadian Stupidity, but we've got the same stuff going on here. Just on the immigration aspect of it, not the healthcare part, read that 2nd article for the interview with the guy. There are details about his coming to Winnipeg from Manchurian China to become.a computer "engineer", but there were no jobs. What was the point of this shit? He admits the Royal Mounties should have shot him dead. If I were the Mom, yeah, I'd have just one job to do, ... maybe some follow-up work out East toward Ottawa.

As is the case on lot of Peak Stupidity posts, I thought this was gonna' be a short one, but I got carried away ... not as much as these two guys here, keep in mind ... I hear only one voice in my head, at this juncture, and it says "keep on blogging, brotha!"

Moderator
PS Thank you, BernCar. I hope it's a global one, as I can't bear to see worse than this!

Thanks for reading, especially.
BernCar
PS Yeah, I think Fred Reed gets caught in a potential well between mock country, as you say, and his Hunter Thompson shtick. Anyway, you keep listening to that voice in your head and keep on blogging'. You've got a man's work ahead of you-- I'm not sure that the NACA simulation in the banner has found the global max or just a local extremum.