Tried to watch a movie - here's 3 reviews in one!

For having watched quite a number of movies lately, Peak Stupidity has been, and will continue to be, pretty lame in our reviews. At the start of this blog, I did mean to even have a Movie Reviews section to be pulled up via the left sidebar on the page. However, it seems like, for most modern movies, the amount of stupidity seen warrants mention for different reasons than the cast, the sets, the lighting, the director, and all that jazz. This post is another example of that, and it involves THREE movies, at that.

I had figured that having three movies on hand would ensure that I could watch something entertaining, if not (probably NOT) enlightening, the other night. That's all I ask for. You would think you couldn't go wrong with a World War II movie. Lots of war movies do have agendas to deliver that I may or may not agree with, but the WWII ones, say a Patton, Dirty Dozen, Kelly's Heroes, Where Eagles Dare, Guns of Navarone, and (THE ABSOLUTE BEST) Bridge on the River Kwai, etc.? How could one go wrong, right? Well, don't get me wrong - I don't think war itself is entertaining, but, from a distance like this, I've always enjoyed these. 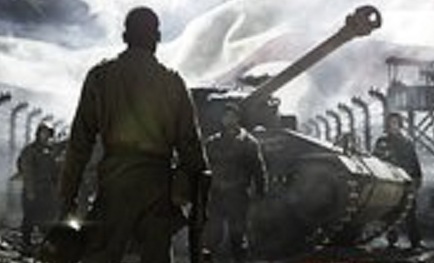 I started watching The Void, then. "The void" was said to be (in the intro. on-screen writing) the region in Western Europe, in spring, 1945, between the Allied supply bases way back toward the D-Day landing sites and the rapidly eastward-moving American front lines under the command of General George Patton. OK, it started out good - the tank crew of 3 (or that's what they showed) were a close-knit team who were about to be sent out on a small mission. Now, I'm gonna back off just a tad on my usual ignorance or lack-of-interest in the movie-making itself just to say: This movie did seem B-grade in the on-screen conversations. The talk didn't seem natural, as all the lines were said with no pauses, mistakes, etc. Yeah, I guess that makes a small difference in enjoyment of the movie (realism is IMPORTANT), but I could get over that easily.

Nah, then there's the one black guy, maybe infantry, who came up to chat, and the one tanker immediately gave him a really hard time and spit near him. Then one sees the face of another black guy who obviously was going to be involved in the movie later, probably with the other guy, to go save the ungrateful white guys from the Germans.... OK, then CLICK! I'm not putting up with that shit. I saw your agenda for the rest of the movie, Hollywood, and I'm not buying it! BTW, the US Army was segregated during that war, so the story seemed bogus anyway. That's not my main problem - I wanted to watch the US 3rd Army against the Germans, not some racial justice story.*

I'm just wondering if these Hollywood people's mindsets are still in the 1970's where movies play only at THE MOVIES, and one can't just go CLICK and turn on or pop in another. You had to sit it out back then, or walk out and lose your $2.50 (or whatever that'd be now - I dunno, I don't go). Do these producers and writers know that we can just make one click with our hands and cut the crap off?

I started up movie number 2, one called The Ottoman Lieutenant. Keep in mind that I had no idea about any of the movies I'd tried watching. None of these are ones I've ever heard of, so getting properly entertained is guesswork.

The Ottoman Lieutenant - 2nd try at watching a movie:

The year was 1914. Hey, I like history! The movie started out in some Philadelphia hospital with a cute young nurse. This could be good, I figured "No, they didn't wear the uniforms that one may see nowadays (possibly in one of the red-light hospital districts), but still ..." I thought. Like I said, I like history too. 2 minutes into the movie - and I think that's counting all the credits - a black guy with lots of blood and trauma was brought into the hospital. It was apparently the wrong hospital, and the impression given is that there were white and black hospitals. I'd never heard this. That may be true.I don't really even need to look it up, because there's no way the doctor, as in the movie, would have sent the guy out with ZERO care, as the patient was bleeding heavily from the throat.

Oh, do you want to know what happened next? Spoiler Alert: CLICK! Enough of this shit. That's number 2, and I had just one movie left that will not be one long anti-white struggle-session of a movie. Is that a genre in and of itself, AWSS, or the AntiWhite Struggle Session films? See, this is why I just often look for anything made before 1985.

Movie number 3, the last shot at watching a movie in at least a somewhat relaxed state, was another I'd never heard of, called Medium Cool. Yeah, that sounds like something from the 60's or something .... 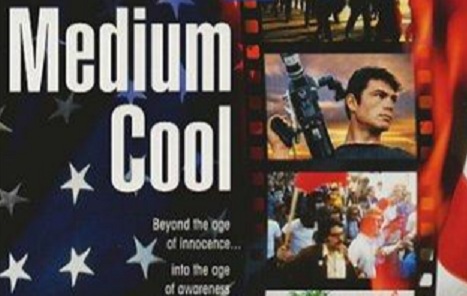 I started the movie thinking it was another modern day one that I'd missed by not going into a theater but once per decade lately. It did kind of make me wonder why that dentist (or was it orthodontist?) from Bob Newhart's old office seemed pretty young in this movie, yeah, younger than he was even on The Bob Newart Show. That should have made something click, but it really wasn't for another minute, when the opening credits showed the year made that I noticed, ahaaa, 1969! This was an oldy, all right.

Modern Cool was about the role of TV cameramen in the craziness of the late 1960's - well, it wasn't even DONE yet when they made this. It is pretty disjointed, but I think I get the story that was being told. The movie was supposed to be mostly set in Chicago, Ill and that other place, you know, that shithole... yeah, Washington, FS (for small parts of the movie), Therefore, the two main characters, Jerry the Dentist from Robert Hartley's office and the other guy, were in the midst of the cntrl-left nonsense of that time. There was much (mostly Commie-induced/Commie-supported) racial strife in that period too, so the movie showed this stuff.

Uh, oh, 0 for 3 in movie-watching, I reckoned ... but, nope, I'd forgotten ... that's right: It's not just that this was the late 1960's, the setting of the movie, that is. Also, the movie WAS MADE in 1969, so the story of the racist blacks was told in a truthful manner. It was freakin' amazing to me to see this. Not all the blacks were bad guys, of course, but the main white guys weren't either. What the hell is that genre called? I'd like to watch more of these TS-genre films, if there are any - oh, that's the Truthful Storytelling period.

I'd tell you the ending of Modern Cool if it's not too disjointed to have one, but I didn't get to finish it yet. 15 or 20 minutes was spent dicking around with the first two movies, so I ran out of time. "What the hell kind of review is that,?", the reader may well ask, indignantly. What can we say? That's the thing about Peak Stupdity - we are not good at the review part. Our genre is Stupidity, and we'd better stick to what we know well.


* I will admit, I had not read the full description of that, or any of these, movies. If I had, then I guess I should have seen this coming.

Gandydancer
PS Medioum Cool is reasonably famous. I had more to say but it got eaten by this "PS" nonsense. Couldn't you just not post what's written instead of vaporizing it? I'm PiSsed.
Moderator
PS - dammit .. the internet one (Joe Stalin, that is).
Moderator
PS - That last one was to Joe Stalin.
Moderator
PS - Yeah, I believe it - it was DURING that time, and that's what's cool about it. You get the real attitudes and opinions of the people there and then.

Yeah, the jeep thing was something I'd never seen. Do you mean the main character, the guy that used to be the Dentist on Bob Newhart, or the other guy? I already kinda forgot.
Moderator
PS - Thanks for the recommendation, JD Bob. I'll get it soon.
Joe Stalin
PS The Chicago scenes in Medium Cool are completely realistic; they actually went to the 1968 Chicago Democratic Convention demonstrations and filmed. The IL National Guard jeeps with barbed wire are my favorite; imagine doing that today. I think the main male character and the dude on the TV camera at the end are both dead now.
Jim Don Bob
PS Spend $2 and rent The Death of Stalin at Redbox.