Free Tommy - start of Glorious Revolution 2.0? We have hope!

Pretty soon they're gonna think it's a movement. 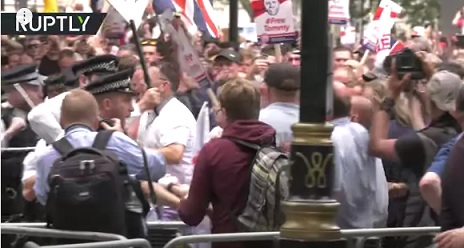 It's very heartening, what's going on in London right now. I've heard that the "Free Tommy" (Robinson) movement has spread even to British embassies all over, but I wrote "heard", as it's not like any Lyin' Press of any kind would want to report on this major, major story. Where are the Woodwards and Bernsteins of yesteryear? Hell, you don't even need those guys - 10's of thousands of people are out in the streets over there! It's the little man against the Orwellian Police State, and the fact that this is not all over CNN (not that I'd see it) should be a clue of which side the Lyin' Press stands on this. Just like the Ministry of Truth in George Orwell's 1984, the Western world's Lyin' Press is PART of the Police State.

Per the links in one of our previous posts on Tommy Robinson, what's going on in London right now is a big validation of the idea of power in numbers. I've written it before, and I'll write it again - "They can't arrest a thousand of us." Again, the reader may find plenty of good videos on his own, but don't ever count on Google-owned youtube to let free speech stand for long either, people. Were these events happening before the internet, who knows how much tighter the Police State apparatus would already be.

It is glorious, not too strong of a word here IMO, to see these guys go right up to the cops in numbers large enough to avoid quick beatdowns and subsequent retreats. Hey, no, it's not like those cops look like goons in the way you see in American riots or even peaceful freakin demonstrations about saving historic statues. They look like decent British citizens, really, but that's part of the problem. How can they go home at night knowing that they're defending the system that is genociding the English people. Why not just go home during the daytime?

Think about this - the "power in numbers" principle applies everywhere. If a big share of those "Bobbies" were to turn around, go home, and write emails to the chief, saying "I'm not gonna be part of this sick business anymore." can they all be fired? Yeah? What happens when they start their own protests, with the backing of 10's of thousands of the Free Tommy movement, to get their jobs back? It could get really ugly for the British establishment ... another Glorious Revolution, perhaps.

Anyway, that's why it heartens me greatly to see a little violence and winning going on by the people, and, believe you me, I don't normally get off on saying "the people". This glorious rehash-and-reversal of the 1960's brings to mind the excellent 18 minute full version of The Alice's Restaurant Massacree written and sung by the folk singer Arlo Guthrie (son of Woody). The tune is not really the point of this song, a genuine exception to Peak Stupidity dogma on pop music.

Don't let the rant about getting arrested for littering get you to tune out. Arlo gets to the point at the end.

"... and the only reason I'm singing you this song now is cause you may know somebody in a similar situation, or you may be in a similar situation, and if you're in a situation like that there's only one thing you can do and that's walk into the shrink wherever you are, just walk in say "Shrink, You can get anything you want, at Alice's restaurant.". And walk out. You know, if one person, just one person does it they may think he's really sick and they won't take him. And if two people, two people do it, in harmony, they may think they're both faggots and they won't take either of them. And three people do it, three, can you imagine, three people walking in singin a bar of Alice's Restaurant and walking out. They may think it's an organization. And can you, can you imagine fifty people a day,I said fifty people a day walking in singin a bar of Alice's Restaurant and walking out. And friends they may thinks it's a movement."

Now, in 4-part harmony, without the circles and arrows, here is Alice's Restaurant, with a lot we can relearn here. From another passage somewhere, "there is nothing new under the sun."

Moderator
PS Thanks for the compliment, Mishra. You are right - sometimes I'll find a typo or grammar error weeks later and fix it. See you on unz.
Mishra
PS Dear Achmed: you talk a lot of good sense. All you need is a proofreader.