A China story and Chinese vs. American police states 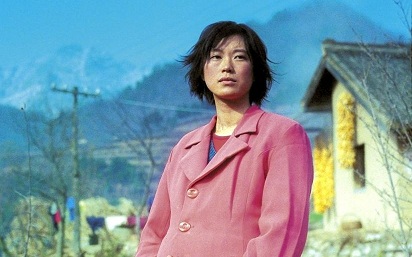 Picture from Blind Mountain starring Yang Li and a bunch of other people named Li, He, Fan, Yuan, Zhang, Zhu, Zou, and Zizeer-Zazzer-Zuzz.)

Yes, they are kicking our asses in most areas of manufacturing and kicking our whole bodies in growth in quality of life, but how has China been doing in the Police State business, where America has been leading the pack lately? I can't put in all the history and details, even what I have found personally, in one post here, but Peak Stupidity just has a quick story today to contrast the two nations. It is from someone I know personally about her 1st cousin back in deepest yellowest Cathay, as we say.

Some 20 or 30 years back this cousin in China was kidnapped from her and my family friend's home town to be taken to be a bride somewhere way east, I think Fujian province (across the straits from Taiwan). The way this happened is that the young lady, a teenager, I think, got engaged in a conversation with a couple who had leads for a good job. In general, Chinese people seem almost too wary, and not at all friendly to strangers. The lead to a good job, however, was enough to entice her to hang out with these strangers, who proceeded to slip her a Mickey (or I guess it'd be a "Chenny" over there) to drug her up, and sent her on the way to Fujian to be married. That's a hell of a thing, but the young lady made the best of it, while still trying to get back home. Keep in mind this was way before cell phones, and most of China skipped the whole land-line phase. (Alexander Graham Bell is dead to these people!)

Anyway, over in Fujian, it was a small, but beautiful ceremony the young bride popped out one baby boy in her new home. A few years went by. It wasn't a particularly awful situation, but just a life she didn't choose and nowhere near, or in touch with, her family.

The family had been looking desperately, of course, but it took a few years for some lead, possibly information passed from the lady or her adoptive village, but I can't remember all the details of the story. When the family found out their daughter's location, they requested the help of the local police (finally, something related to the title??) who were helpful and proceeded to go on a road trip for a number of days (we all like a good road trip once in a while) to the village. The interesting part here is that the local police at the destination, or kidnapping-Point-B, so to speak, would not cooperate with the girl's family's road-tripping hometown police. Nope, they told the family, "you can't have her. She ain't coming." It was a standoff between two local police forces, not the way one would think it would go in China, right? Wasn't there some big Central Red-China Police that would straighten out the whole thing from Peking? No, some things are not nearly as centralized as one would think, and that is almost always a good thing.

Contrast that incident with the way things would go in the USA. You can't get a ticket for rolling through a red light in Montpelier, Vermont without hearing about it within a few months in your home in Artesia, New Mexico. With the aid of computers they've tightened it all up over the last 3 decades - this writer has lots of experience in this non-felonious realm. There's good and bad, I will admit. Kidnapping was made one of the 1st Federal crimes just due it being too easy to move out of a jurisdiction when committing a terrible crime like this. It's gone way too far in Police State USA though. Sometimes you'd really like to leave a few bills and ongoing annoyances from the state and county behind.

The American way is still OFFICIALLY that the local Sheriff has the sovereign power in legal matters as an elected official. He SHOULD be able to tell the governor, or even the President to piss off, so long as local law does not conflict with state or federal law. It does not work that way in reality, right now, and we all know that. If someone from state government tells him to jump, he'll be all "how high?", no matter who was in the right by the laws. In addition, Federal law has been made into a 20 ft wide tome of books that can neither be all known nor all followed. This way, they can just forget the 10's of millions of letters of the law and just rule the living hell out of us.

Yeah, I like China's way better in this regard. Decentralization is almost always a good thing.

Oh, did you want to know what happened after that? The local police from the family's (and original) girl's hometown made a second trip with some reinforcements some months later and were able to extract the young lady, but without the son. Here comes the great human-interest part. The Peak Stupidity blog is not normally about "human interest", cause it's too girly, but this is a good one. The young lady was back in her hometown when her ex-husband traveled that long way (back before the new roads and fast railroads) to try to get her back, carrying a large sack of peanuts as an apology gift(?).

After setting down the large sack of peanuts at the doorstep, the man begged "Please, ask her if she would come back to her husband and son. We miss her ... blah, blah." (This was in Chinese, of course.) "OK, that's all fine and very romantic, but this is not the right house - you're at her cousin's, dude." Well, he did the same thing at the correct house, and the young lady decided, "yeah, WTF, let's go back."

It was a happy ending to this story, but I will tell you that that movie (see picture at top) named Blind Mountain", which is about a similar occurrence of this kind of kidnapping, ends a bit differently. It's a good, but very obscure movie that, even on the great Internet Movie Database, took me a while to find.

Moderator
PS: I thought it was kind of a heartwarming story, A.M., and humorous at the end there (I'm picturing the guy with the peanuts, as the wrong house).

Yes, things have changed so much in China over the 20 years since then. As I wrote, most of China missed the whole land-line phone phase, that we underwent for, what 6 to 8 decades, depending on location?
Almost Missouri
PS
That's a good story, and in retrospect maybe isn't that surprising that the woman went back to her husband/kidnapper. After all, tfw no husband/kid in home village. And now that her husband knows she can get back home, she's got new leverage ("hand") in her marriage.

I no longer remember why I wanted to know the date. There was a reason. Maybe it'll come back to me. Still, late 1990s is surprisingly recent considering almost all aspects of that story would be vastly different now, only 20 years later.
Moderator
PS: Almost Missouri - I'll write you on unz next time I read a comment by you, but I found out this was NOT in the 1980's but the late 1990's.
Moderator
PS: Sorry, this is no Unz.com with its nice editing features. I meant "2,000 comments per day..."
Moderator
PS: It was probably in the 1980's just going by my source's age, etc.
Moderator
PS: I've never had the bug you just reported - I'm very sorry if you lost much of your writing. I really hate that myself, A.M.

Re: your 3rd comment, I want to avoid the spam programs - they are not at all sophisticated, as all it took was something that humans have to read. Obviously no humans are involved with the particular program that got up to 2,000 hardly-readable drug-sale comment per date, with the exception possibly of logging the site for abuse.

I just didn't want to make it something that the program might automatically do.