Thoughts from the coffee shop ... 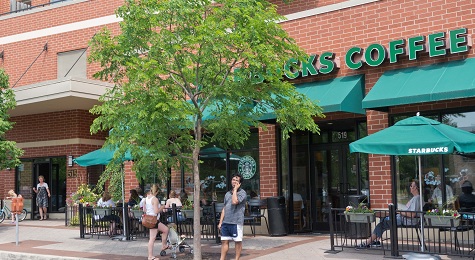 The Peak Stupidity blog staff was on a field trip to a coffee shop this afternoon when some thoughts for this post occurred. This writer is not a coffee drinker, so perhaps I am missing something as I write this. However, this is more about the ubiquitous coffee shops than the drink itself though.

It's been a long time since Americans were satisfied with coffee from a can at home, instant or made by the Joe DiMaggio-advertised "Mr. Coffee" machines and the like. Over the last 30 years or so, with Starbucks, Seattle's Best, and loads of independent shops, drinking coffee and hanging out has become a thing for "the masses" that was only for the Europeans and the Communists, (but I repeat myself) back in the past.

It's not for me. I am not knocking the concept by any means, as I know friends that get lots of real work done at these places and others who just go as a break in the working day. It's not for me, as that kind of hanging out is not my favorite, and because I don't drink the stuff, and a cup of hot chocolate with a slice of cake sets me back almost 10 big ones. That brings me to the coffee itself, just for a bit. There are the expresso's, the cappuccino's, the latte's, grande and petite (I assume). It seems pretty pretentious, just saying "grande", instead of the old American standard "super-size me", doesn't it, along with the Italian stuff? It was, but I think it's been so long that it's not pretentious anymore, just part of the vocabulary.

"Give me 2 Grande Latte's a 4 croissants, and supersize both of 'em." "OK, drive up to the 2nd window please." Would there be any point to drive-thru windows at coffee shops? Do they have them? What would the Socialists and Commies that are heatedly discussing the plight of the masses do, in this case? You're gonna need more and stronger stuff inside the vehicle for them to pound their fists on to make the important points about keeping the revolution going.

Yeah, anyway these drinks are kind of pricey now, even accounting for inflation, vs. that 50 cent "cup a Joe", whatever the hell that ever meant, of the past. Being sophisticated has been the big thing here in America for about that time period, 3 decades, that the coffee shops sprouted like a fine Co-loom-bee-an bean tree. That is a reversal from the old American trait of being humble discussed here more than a year back.

The thoughts that occurred today were not about the types of coffee, but the types of people that hang out at coffee shops daily along with restaurants in the evening and possibly the bars the same night. This is about young people and economics, now. Peak Stupidity has tried to give the big picture over many posts (though it's been a while) with the Global Financial Stupidity topic key. Things really don't look good in the medium-to-long terms. The young people have been affected for quite a while already, in terms of a real lack of decent blue- and white-collar jobs due to reasons beyond the scope of this one post.

There is a huge contingent of young adults that work in the service/hospitality "industry" - OK, for the point here just meaning waiters/waitresses, bartenders, and these baristas, a term I'd never known until 5 years back. None of these jobs, besides those of some of the bartenders make very much money. Service jobs don't very often, as the jobs don't "create wealth". I am not at all saying the jobs don't involve hard work, BTW, but the jobs are not productive in a general economic sense. I'm also not implying that these people have much choice. There aren't factories all over the place with blue collar and white collar jobs everywhere ready to hire these young people, as if it were 1975 still.

What I see lots of times in the areas with the coffee shops, restaurants and bars, is that lots of the customers are the young people who work at these same service jobs. You make some, but not decent, money during your shift, then go out before or after and blow a significant chunk on it on two lattes during the day. You get at least one meal out and possibly go out for drinks at the bar you work at. Where is the extra for anything more than cheap rent, the utilities and maybe a car lease? How does one get ahead like this?

What can make it worse maybe more than 1/2 of the time, is that this barista over here has a degree in Anthropology or Art Appreciation or even Biology. Hey, it's great you and her may have lots to talk about. The problem is that, due to the University bubble covered in many posts on Peak Stupidity already, these poor bastards/bastardesses(?) had been suckered into getting that near-mortgage-sized loan to have a nice time for 4 years. Lately, there is no long-term benefit at all from the spending of that money. Four years later, working at the same coffee shop or restaurant, this poor millennial will now have a big loan payment, along with rent, utilities, and maybe no car now. Do you wonder where the Bernie voters come from? Before long it'll be lots of taxpayers feeling the Bern, when that school loan money can't get paid. You can't bet blood from a stone, see, and you can't get $800 per month either, out of a Berned-out Barista all wired up on Cafe Lattes.

This is not a recipe for long-term survival, both for the individuals and society. Oh, a few might get by and have a kid or two, but for most family formation looks well-nigh impossible. No matter what the females might say, and oftentimes believe in the outer part of their brains, the instinct inside says they want a man who can provide.

Not unless it's just Expresso Love:

From Dire Strait's 1980 album Making Movies, from which Solid Rock was also featured.

Moderator
PS: Just read that comment from Mr. BernCar too from, oh, most of a year back. Many thanks for that compliment.
BernCar
PS If you don't mind me saying so, you've got that sharp-edged Mencken sense of humor without the stupid post-modern irony. Much appreciated.
Moderator
PS

Thanks for the thoughts, Mr. Ides.

OK, kidding aside, the "PS" needed per the fine ... errr, bold print has slowed down commenting to nothing. That doesn't bother me, but I apologize to those who missed the note and whose comments went to IP packet heaven.

It's just that without this step, back in October, spammers from Russian IPs (allegedly, I dunno) were sticking in 1000 comments per day.

Again apologies. BTW, I wrote about this same thing and forgot the "PS" myself about 2 minutes back!
Ides
PS testing comments