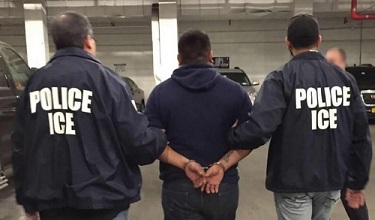 Per this recent post by Steve Sailer, some immigration lawyer whose husband has been out in the sunlight* as a > 1 decade-long proud illegal alien from Trinidad&Tobago has been invited to the Congress tonight for President Trump's State of the Union address. (It's SOTO for the wonks who like to say POTUS and SCOTUS too which sound pretty damn stupid actually - what in hell is so hard about President and Supreme Court - on extra syllable each?)

Full excerpt off of iSteve, from Associated Press:

Ragbir was in federal custody Saturday, several weeks after he was handcuffed and arrested during a routine check-in with the Immigration and Customs Enforcement agency.

… Three other Democratic members of Congress from New York showed up at the rally in support of Ragbir: Rep. Carolyn Maloney, Rep. Joe Crowley and Rep. Yvette Clarke.

They say the government targeted the 53-year-old native of Trinidad because of his activism as the head of the New Sanctuary Coalition of New York that helps immigrants fight deportation.

The government says he should be deported because of a 2001 wire fraud conviction involving a New Jersey mortgage company where Ragbir worked that was caught up in a fraud scheme. He was sentenced to 30 months in prison, but is fighting to vacate the conviction in federal court in New Jersey, contending he was just an employee doing his job, unaware of any fraudulent activity.

Have ICE come to the speech and cuff this lady on treason charges and her congressional accomplices. It wouldn’t matter if they all got sprung in the morning, this would,

b) get Americans watching the State of the Union like it was the superbowl.

I personally would come out of TV-banishment mode to a sports bar if it came down to it, if I knew this had any chance of occurring.

You are the head of the executive branch, dude. Just do it!

Now, since writing that above appeal, or "open letter" to our sometimes-useful POTUS, I personally ran into a couple of the guys you can see in the photo and the topic of this post. Nope, it wasn't those 2 in the "file photo", but 2 guys in person that I got to talk to.

I mentioned to one of them this story about the long-term illegals and their treasonous sponsers that are out in front of the public and the US freakin' Congress. I had the same advice above on what should be done tonight. The guy told me he couldn't believe this stuff is happening either. No, I don't expect every immigration agent to be up on the big picture, so I took his word for that. He did seem pretty thrilled with the idea of a nationally televised, hand-cuff-enabled arrest of the immigration lawyer wife and congresscriters as a kind of intermission, giving us a chance to get to the fridge for a 4th beer.

Yeah, the ICE guy could have been humoring me, and additionally, wasn't anywhere near Washington, Federal Shithole, but still, one can dream, can't one, and write open letters to the whole wide internet? That's what we're here for.

An astute commenter on the unz page linked-to above was concerned with the Article 1, Section 6, subpart 1 Constitutionality of said perp-walk-outta-the-chambers:

They shall in all Cases, except Treason, Felony and Breach of the Peace, be privileged from Arrest during their Attendance at the Session of their respective Houses, and in going to and returning from the same; and for any Speech or Debate in either House, they shall not be questioned in any other Place.

My bold there, not the framers, but one can see that this should alleviate any and all Constitutional objections, according to the Peak Stupidity blog legal department.

You read it here first. If this were to happen tonight, I will promise not to say another harsh word about our President for what ... maybe a year or more.


* No, they are not exactly living in the shadows

http://www.telegraph.co.uk/comment/11441697/Dr-Rajendra-Pachauri-the-clown-of-climate-change-has-gone.html
Moderator
PS - Yeah that SCOTUS sounds just too much like a body part (yes long "o"). Maybe you're right that people don't say these acronyms, but just write them.

engin-eer-me-now
PS I don't watch that much TV either, but I don't know that I've heard anyone say "potus" or "scotus". I thought it was just a written thing. But I could be wrong. If they did/do pronounce them, they would be ugly words for sure, depending on their pronunciation (long o or short o). Speaking of pronunciations, I'm just glad in this latest round of sexual harassment talk, most media critters are pronouncing it the normal way (her - ass - ment). Seems the last time it all hit the fan, most wanted to say HAIR - us - munt, which just sounds silly to me.