Authentic Coach handbag or cheap Chinese knockoff, and WHO CARES?

Which looks better, you say? Just drop those two thingamajigs and turn around once or twice. I'll tell ya. 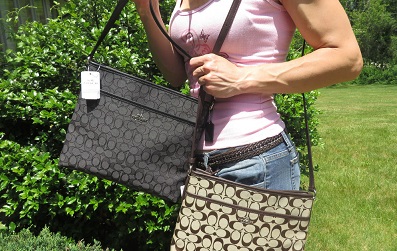 
Peak Stupidty has our newest topic key, Female Stupidity, starting with this post ... clap, clap, clap. I've tried to keep the list down somewhat and apply existing ones to each new post. However, this and some previous posts (gonna have to clean up like this in general) deserve this new one, as nothing else fit well. Yeah, don't get your reproductive-parts-hats all askew, feminists and other ladies, as most of the other flavors of stupidity can be assumed to have men involved, along with a few female hangers-on (is that a real word?).

With that housekeeping behind us, what the hell is with all these Coach and other designer purses, now called handbags? It's been irking me for a while, but it came up in an on-line conversation today, or maybe I just wrote it and got no answer, like a modern-day conversation. It's nothing like the big deal of the serious rip-offs of American intellectual property in the engineering world, but this knock-off purse, shoes, whatever female consumer goods thing means a lot to some damn people.

I have no doubt that the fake bags, being cheap China-made crap are lower quality and are a rip-off for the good-tasting lady with good taste who expected quality. A man would figure, yeah, I want this thing to last a decade or more to get my money's worth. Let's pressure test them or something, and get the poor ladies' money back from the Chi-Coms for this poor quality imitation crap.

The stupidity here is that the ladies really don't care about the quality when they buy a cheap one to display their high status with. It's to show off, as no women wants to be left out of the whole handbag scene. Imagine, carrying your lipstick and Sue Grafton novels in a handbag with some unknown design on it! Better just to stick all the stuff in your pockets, if it came down to it. Now, the ladies who paid full price can feel lots of pride that they blew $500 of their husband's labor on this REAL one, but who can tell about the other ladies? They are getting ripped off of their show-off power. It's a quandary really, and there is probably some esoteric field of mathematics (game theory?) that can describe what these ladies should do.

In the meantime, to avoid trouble, the husband should not buy any kind of handbag at all, but just a boob job (pay for quality, no cheap knocker-offs will do here) and a gym membership. This will cost the same as a real Coach handbag (hell, I don't know), but with results that can be distinguished. That is, until the Chambers of Commerce of both nations can amicably work this out. Next on the agenda, shoes.

What do I know about all this, to be writing a blog post about it? I'm probably not your best source, as it wasn't that long ago that I figured women also had just one or two pairs of shoes, with an extra dirty set for painting.

Hey, listen, back in the day, you didn't worry about what brand your handbag was, as folks was poor, see?! You took good care of the handbags and gladrags that your GrandDadddy had to literally sweat so's you could buy . .. acccording to Rod Stewart, anyway .... Well, I can tell you this, we didn't use cheap Chinese knock-off gladrags either, people ... whatever the hell they are.

Rod Stewart, featured here, doesn't have a smooth Gerry Rafferty-type voice by any means, but his gravelly voice is good too. The song was written by a guy named Mike D'Abo from the band Manfred Man and is from Stewart's An Old Raincoat Won't Ever Let You Down album from way back in 1967.

On youtube, I usually ignore the comments writing about "I came here from ...", I guess some video games, but a short snippet of the instrumental part of Handbags and Gladrags was the intro. music on the British version (original) of The Office - the American version possibly being the funniest TV show of all time.

Moderator
PS: Keeping the peace - is that close to the same as being pussy-whipped? I can understand though.
Peyton Fahrquahr
PS My stepson's wife loves blowing his money on a name. $2k jackets, $400 belts...It must drive the poor schlub nuts, but, like me, he finds keeping the peace worth the "Damegeld".
Moderator
PS Thanks for the comment, SN - you can see I am not overwhelmed by them, but I just got back here. I've seen a bit of that but it was probably after I was mostly off TV. I know who would be interested in that information, as certain unz blogger we both know ;-}

Have a good evening, ScarletNumber.
ScarletNumber
PSD'Abo was the father of the sister on The Wonder Years.