Whatever happened to this guy? 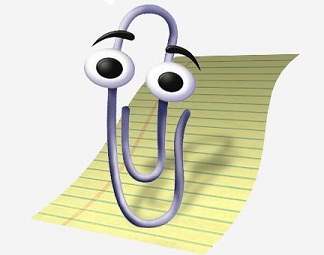 His real name is, or hopefully WAS, "Clippy". Not having seen this nosey bastard pop down lately onto my computer screen while I'm in the middle of getting things done, has been a blessing.

Yeah, there's plenty more of this type of stuff: indentations that you don't want that happen anyway, automatic capitalization of letters, windows fading out when you accidentally moved the cursor over the task bar. I'm still thankful to have Clippy gone anyway, to an early bent-up rusty grave, hopefully.

I get it, I get it, computer geeks, you are proud of your new "features" and you want to have them default-on for the running of new forced-upgrades of the software that people who are TRYING to work use. You know, right, that I don't want to keep learning new things about my TOOLS, and software programs are nothing but tools? I know that my hammer works the same way EVERY SINGLE TIME that I pound in a nail (or beat the hell out of my computer), and I LIKE it that way! That's how tools are supposed to be.

OK, I can recommend Linux versions, but am still working under Windows stupidity right now, so who am I to preach on this. I will expand this post another time, when I can organize my thoughts better, but this post was really written for closure (haha, that sounds serious ... but it's not here) on this Curmudgeonry topic key for a certain reason to be disclosed next post, this evening.