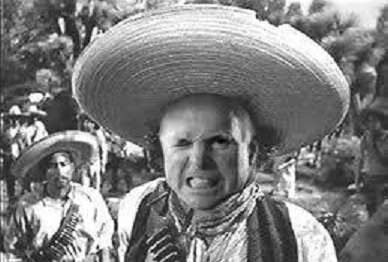 The Globalist, Neocon scumbag Juan McCain McAmnesty, has been vilified on Peak Stupidity already (The rticle is entitled "Speaking dead of the ill".) Yeah, we really don't like this guy. He is truly one of the sworn enemies of all decent Americans. I don't know which of the major candidates in the presidential election of 2008 was more of a mark of shame for Americans, or at least the "selection" process, this bastard or the Øb☭ma

Because the VDare site is the best thing going as far as anything immigration related, McAmnesty is about public enemy numero uno over there, and James Kirkpatrick tears him a new one with Profile In Treason: The Inconceivable Evil Of John McCain—“Man Of Blood”. I will just put some excerpts in but note that VDare writers and/or editors are big link-guys, which is what the internet used to be about (say it with me - Hypertext Mark-up Language - there's your HTML for ya', bitchez!). Anyway, I just counted 58! links in the article. 80% or more of them are to other VDare articles where one get get at the real truth, so read the article there. BUT, they don't have comments, so the article appears here on that site with so far almost all supportive columns (but the links don't pass through to unz.com). The links don't appear here either due to deadline pressures [WTF?? - Ed.]

There is no hatred more complete and no malevolence more fanatical than that held by the American political class for the American people. The commissar’s rage against the kulaks, the jihadist’s fury against the infidel, the inquisitor’s wrath against the unbeliever, all of this pales in comparison to the genocidal bloodlust Senators and Congressmen have against their own constituents. And even as they gleefully promote the outsourcing of jobs, the importation of cheap labor, and the ruthless extirpation of property, wealth and liberty, these shameless parasites demand their slaves die to export their filthy System all over the world.

The most contemptible and dangerous of these vermin is Senator John McCain. In a political career marked by near constant betrayal and hypocrisy, there are only two constants to his bloody career. The first is a passion for war, any war, for any reason, which can only be termed pathological. The second is the desire to replace the people of his own state and the voters of his own party.

Like a dying venomous snake, McCain is using his final moments to strike at President Trump and those who supported him.

Yeah, well, it's nice to be civil and all, like that, James, you and your William F. Buckley self, but we'd have some choice words to describe this man. ;-} Regarding McAmnesty's ideas that America is a proposition, meaning it could be run by anybody, and "blood and soil" somehow don't matter here, Kirkpatrick writes:

McCain’s ideals would be unrecognizable, not only to the Founding Fathers, but to practically any other American generation in history. Would the Father of Our Country have countenanced endless interventionism? Would either Jefferson or Hamilton have recognized a moral imperative for self-annihilation? Would any Federalist or anti-Federalist celebrate the replacement of the very people who had just won independence from the British Empire?

McCain’s denunciation of “nationalism” is also selective. McCain is quite eager to defend the borders of other nations. “We are all Ukrainians,” he declared on one occasion [Senator John McCain: “We Are All Ukrainians, by Jay Newton-Small, Time, February 28, 2014]. “We are all Georgians” he pronounced on another.

It is only when it comes to America that McCain’s “patriotism” becomes abstract and imaginary. Indeed, it seems every people on earth has a right to “blood and soil” which must be safeguarded by American arms, except Americans themselves.

More here, as the writer brings up the idea of blackmail to explain how this guy can be so much against his people. This possibility, along with bribery, has been brought up here at Peak Stupidity, in reference to Trump and good old Ross Perot.

The Occupation Government in Washington has presided over the Death of the West. The world order McCain defends is, quite explicitly, built on the dispossession of the European-Americans who actually created the American polity. If our civilization or country is to survive in any meaningful sense, that order must be destroyed.

And that means replacing the political class, the enemy collaborators, exemplified by the likes of Senator McCain. His warmongering against a nuclear armed Russia is unhinged. His desire to hurt our own nation is so unrelenting and energetic one wonders if he is working under duress or threat of blackmail. I almost hope so. To think he actually believes these ideas is a terrifying possibility.

I wish the Senator no harm. I only offer a desperate prayer in self-defense that his retirement will be forthcoming and his media megaphone removed.

I'd put that just slightly differently - "If this guy doesn't retire, I will be glad when he dies, if that's what it takes to keep him from any more harm to America."

Enough, time for something lighter tomorrow - maybe more on China.

Moderator
That was no joke, BTW, about the Russian IP's (sometimes it's China, and sometimes Scottsdale, AZ, but mostly Russia).

I hope I have not deleted a 2nd of your posts, Reverend Spooner, but I will be careful in the deletions.

I will probably ask people to just put a code in at the beginning of the post. I don't like the "CAPTCHA" stuff, as I can't always get through it ;-}
Moderator
Hey, Reverend, my script to delete a bunch of Russian (yeah, no kidding, at least the IP #'s are supposedly from Russia) got one of yours.

I'm very sorry. As I recall, it was about McCain's first wife, or his miserable treatment of his first wife.

If it was short, please comment again. I promise to not get it deleted. I need all the comments I can get!

Hey, if this spamming of a small website with unreadable viagra ads is all the Russians can do, I think the Neocons can rest easy...
Rev. Spooner
Fuck u peak stupidity, where's my comment?