16 Years of Spreading Democracy - They still hate us for our freedoms(?)

Peak Stupidity remembers 9/11/01 today. This is not in the sense of a commemoration, but just that, yes, we remember what happened, what people said then and what people in power have actually done since then. There is not much good to be said, beside things already written about the bravery of the men of the NY Fire Department. The United States had never had a direct attack of this magnitude within the country itself since Pearl Harbor, Hawaii at the end of 1941 (yes, it was just a territory then).

It was shocking, and the reactions by people of the media could not have been expected to be completely sane just a day later. Ann Coulter (whom has come around to be a true Libertarian-Conservative) wrote about us going over there to kick ass and convert them all. The neocons talked about our Moslem problem as an opportunity (though even back then the worry was the "backlash", as dying of smoke inhalation, burns, or a jump from 1000 ft. is bad, but having peoples' feeling hurt is another story entirely.).


Retaliation - American Style. Spreading Democracy... that'll learn 'em. Let's fight them over here, so we hopefully won't have to fight 'em at home when the next of kin immigrate there ...?? 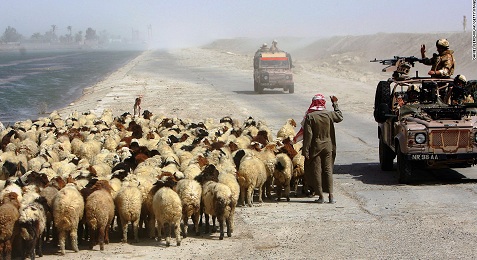 There are still arguments over what really happened, and I WILL NOT get into that. Suffice it to say that indeed the US Feral Government seemed really ready with a plan to do something, mostly to really get moving on a more solid police state, very quickly. Does that kind of jumping-to-action happen a lot in big governments? I don't seem to recall anything ...

We all know that only very specific minor solutions as reactions to the attacks were accomplished, while the basic problems were maintained or made worse. Cockpit doors on airliners are hard to bust through now. Check. The amount of Moslems entering the US to stay, and even from Saudi Arabia, where the culprits came from, have increased drastically. VDare has all of this, and here is information on number of Saudi students. This box in not checked. Immigration under control now? That box is not checked.

Let me get to the point of the post title. Well, you'd have thought, after the initial anger and other emotions wore off, people in power in the US Feral Gov't could really look at what the big problems were: Uncontrolled immigration, military meddling in places that were not any part of Defense of the country, and one more to come last here. However, the big idea of the neocons, President Bush included there, were already hatched, I guess, and the deal was we would spread democracy, and give that part of the world a taste of our "freedoms", so they'd never go back to their camel-jockeying, women-oppressing, ayatollah-following ways. Just try it in any country first, say, what the hell, Iraq.

Next, on the domestic front, the "Patriot" act, something that America's founders wouldn't have used for toilet paper due to biohazard, was passed, again rather quickly for a big government. It was part of the blueprint for the police state in progress. About the freedoms to be foisted on the poor bastards in the Middle East Moslem world, is freedom like a pile of gravel? Do we reduce our pile of freedom when we move it with the front-end loader all over the world. It sure as hell seems like it here, as there ain't much left!

Yeah, many think that, oh it's just the airports. "I will boycott that whole industry before I take part in the massively undignified and unconstitutional stuff that goes on.", you may adamantly tell me. I hate to break it to you, but it will come in some form to other travel modes and other areas of everyday life. They can't just have a partial police state - it's one of those all-or-nothing things.

This part about the airports, though takes me to the last, but important, point of non-solution to the problem we had on 9/11/01. Another box unchecked is any fix to the tragedy of having unarmed people on all 4 of those airliners that day. The picture above shows it vividly. People are still, 16 years later, being DISARMED at the airports. No lesson has been learned. The next paragraph is something I've been wanting to write for a long time.

Wouldn't this country, and the whole world possibly, be so much different now, if the following simple thing happened 16 years ago today: What if the airport-based security guys at that time were NOT disarming passengers? What if only 2-3 passengers on each of those airliners had been armed (very likely were they living per US Constitution Amendment II)? Can you imagine how proud Americans would have felt and still would, had the planes been defended through quick dispatch of the RWB's (Ragheads With Boxcutters)? Not only that, but the rest of the world would be mostly envious, some angry, that this was a country that could not be messed with as there was still "a rifle behind every blade of grass".

The Middle East was invaded willy-nilly and the US population was coerced into becoming a police state, all because of 19 guys with boxcutters? Is that what I'm telling you? PATHETIC!

Moderator
PS: Hey, Stephen. Sorry for the late reply. People bring guns on planes quite often. It's only law enforcement people who are so privileged (with a few exceptions), unfortunately. Nothing bad happens. Most armed citizens are MORE level-headed and have better aim than most cops.

I ask anyone, would you rather the plane go down without a fight, or chance a few holes here and there (the modern planes are designed to have crack-stop structures)? I'm sure windows would blow out (depending on the caliber) and pressurization would be lost, but that wouldn't be my biggest worry during a hijacking.

I appreciate your writing in.
Stephen
PS

How about the windows?