What's with the banana peels in the trees anyway?

No, I am not being a comedian (today), and I'm not Jerry Seinfeld or any other of those "you ever notice?" guys. I just really want to know - what the hell is with the banana peels in the trees anyway? I wouldn't even ask if I hadn't run across "Ole Miss Goes Bananas": Dear Parents, How's This For A $40K A Year Education? at Zerohedge a few days back.

In this post Peak Stupidity is making an effort to get back to its roots. One might say we are "roots-blogging" this morning, our core competency being the description of the utterly massive levels and myriad types of stupidity to be seen in America today, as we near the peak. The question in the post title and 1st paragraph is only a real one due to the fact that we have not determined where the stupidity of a banana peel in a tree being bad has originated. This is even after having, albeit quickly, read the zerohedge article linked to above, as we would LOVE to read the comments (completely unusable on an older browser - thanks, Zerohedge! No, seriously, I wasted WAY too much time reading the commenters there because they are best-in-class, and there are only so many hours in the day, and dozens of ZH posts/day.)

As we bloggers write so often, "Read the whole thing". Since I can't guarantee that will happen, let me just post one excerpt of an excerpt from one Rod Dreher of "The American Conservative" from his article there

"So let me get this straight. Three black students freaked out because they saw a banana peel in a tree while at a mixed-race fraternity-sorority retreat. The entire retreat ground to a halt so everybody could sit around and emote about the banana peel. A frat boy confessed that he had tossed the peel into the tree because he couldn’t find a trash can — then he promptly abased himself for having committed an offense against racial correctness. The freakout got even freakier, with some black students saying they didn’t feel “safe”. Because of a banana peel. Then the entire retreat was cancelled, and now it’s going to be a campus-wide Thing at Ole Miss. Over a banana peel a frat boy threw into a tree because he couldn’t find a trash can."

"Didn't feel safe", he says. The problem is again with TV, but I can't blame the modern idiotic shows, as is usually the case here at Peak Stupidity. No, the problem here must lie with the old slapstick comedy and Bugs Bunny cartoons in my short but lucrative analysis: Do you know how easy it is to get hurt by slipping on a banana peel, people? I have seen it ALL THE TIME in those old comedies and cartoons on TV. ALL! THE! TIME! PEOPLE! They don't always stay in the trees, is the thing. Right? Or, am I missing something in this story?


Really man, what's with the banana peels in the trees? 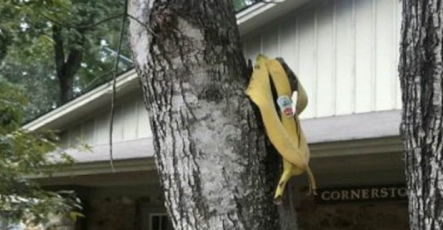 Here's the part that merits the topic key science being applied to this here post: When my boy was a little one, I would bring him a banana (along with cookies) to eat on the walk home from school. We would put the peel somewhere in a fork or crotch of a tree, or on top of a stump each afternoon as part of some long-term experimenting with the process of rotting. We would both make an effort to remember where we put the one from each day of the week, and then keep an eye out for them during subsequent walks.

This banana peel rotting experiment gave me a chance to teach this boy a little experimental science, without the theory, because, you know, his being a little boy and all. (He did learn that there are tiny creatures in there turning the stuff back into dirt.)

It was pretty good for a while until we it got old for both of us. In the meantime, we answered questions about whether dry weather or wet caused more rotting, or did it matter that the peels were in the air or on the ground. We were like the myth busters, however without either of us adorned with any kind of gay beret. It would not have occurred to either of us walking back and forth to the school to think that maybe our 100's of banana peels in the plants amounted to some sort of aggression to some sort of sick fuck!

a) This reminded me to make a post of the "Myth Buster" vs. real science and engineering.

b) A reminder to my fellow treehugger readers that, no, we did not leave on those plastic stickers, as in the picture. In fact, that is the real egregious action here - those stickers stay around for years - throw 'em out first! I don't like litter any more than the next guy.

Moderator
Hey, I resemble (part) of that remark! Anyway, it'll be coming up hopefully tonight. Thanks for reading.

I don't know about the refund either, as you may up owing "the store" money, what with all the Millenials' school loans and credit card debt. How 'bout the Salvation Army thrift store?
David-2
I for one would like to read a nice cranky post about "Myth Buster" vs real science and engineering.

I have nothing to say about the banana story except we should return the Millennium generation for a refund and get a replacement. (And I'm not too happy about their idiot parents, the Boomers, either.)