"All Things Considered", it's been a long road to Peak Stupidity

Some folks were discussing the Lyin' Press and good old NPR, National Public Radio, came up. This reminded me of just a week or so back, when I had no control of the vehicle radio (yeah, some still use those.) It was just a situation in which it would have been pretty rude to ask the driver to change the station or turn it off or down. After a minute, I realized that this was NPR, and that they were still in business. Easy, because the announcers are just so soooothinggg. It is very relaxing stuff to listen to, as none of them talk loud or are obnoxious in any way, until ...

... you hear what they are talking about. I should have known that, since they feed off the public teet*, they are still the same left-wing fogeys that they used to be. I realized the guy was talking about some President Trump impeachment ideas, and that sort of thing ... always so very logical and play-by-the-rules sounding ... never the other side of the story though, one notices, and never the big picture ... just keep on the establishment ... soothing ... narrative .... wonder what Nina Totenberg is like in real life ... very soothing, no confrontation ... just the only side of the story there is ... she sounds like one of those sexy librarians.. maybe a spinster....

Nina Totenberg comes in to this post because, though I have no idea is she is alive and shelving books with a tight short skirt on kicking, or on the radio even, I remember her from when years back my roommate would have NPR on in his car and sometimes inside (that's why I can compare what I heard to the same old NPR from the 1990's). It was the same, very nice and relaxed and quiet, but the bullshit would un-relax me a lot. So, good and bad, yin and yang, but "All Things Considered", it's always been a bunch of Commie clap-trap supported by listeners like us, along the highway to peak stupidity.

Sometimes I wish there was no internet, so I could still think that the woman on the left was who Nina Totenberg was: 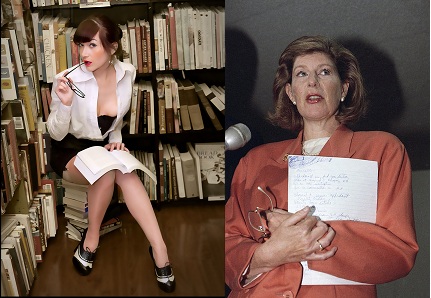 * Yes, they will tell you a lot that National Public Radio is supported by listeners like you. Yes me and you, Kemasabe, whether we have the radio on or not. I am a listener to Rush (the band, mostly, but the guy from Rio Lindo once in a while), but still at the same time supporting NPR. They still get US Feral Gov't money, meaning mine and yours, all to spout out the same old left-wing garbage that ... wait, I don't feel soothed anymore, dammit.

Moderator
Yeah, maybe time to change churches too. I don't know - just talking extemper-anus-ly here (out my ass).
Hans P> Bosse
Our pastor just sent me something from NPR about a guy who became a batboy for the Yankees. It was the first and last time that I have and will listen to ANYTHING on NPR.

Ahh, my tax dollars at work.