Shark scientist (in the movies) comes out slightly conservative...

... hilarity ensues? No, not really hilarity, it's just that our title line here sounds like a "The Onion" headline, which, as most of us know, are getting impossible to tell apart from reality.

A few months back PeakStupidity featured a post about "Bono" (not his real name) something-or-other and the great sound of the band U2. Our point was, their great music (only great due to the guitar of "The Edge" (also not his real name)) has absolutely nothing to do with any special knowledge or intelligence on Bono's part about what's wrong with the world. Here's the post: Bono, you'd be serving up fries chips if it weren't for The Edge.

The same truth, that these artists have no special insight into humanity or society, and probably a bit less than your average Joe 12-pack (inflation!), can be applied to actors in Hollywood also. In fact, I'd give musicians a little more credit just for the talent, and stage actors some kudos too, though still with no credit for additional smarts involving politics. The Hollywood ones, well, you just have to be good looking, and not even that sometimes. I thought long ago that these people had to memorize the whole script, until I understood how things were split up into scenes and so forth. They live in a rich and isolated world of their own, yet many of them, present post with an exception, spout out all kind of crap about the rest of us.

OK probably most conservatives and especially readers here already know that, so that's not something new to read. What to do about this continual bombardment of their bombastic bullshit is another story? There are talks of boycotts of movies by the stupidest of these actors. That doesn't concern me very much as I DON'T LIKE almost all new movies, so I haven't been to the theater, with the exception of seeing "Angry Birds" in about 9 years - hard to do a boycott if you don't partake to begin with. It's all good though, but sometimes you've just got to separate the movies that you like from these commie actors' behavior. Enjoy what you like, but don't support the media that touts all the BS from the actors. It would all go away were everyone to ignore it.

Finally, I am coming to something related to the post title... see there are a few conservative ones, your Clint Eastwoods, Jon Voit (the actor, not the periodontist), etc. Probably, in Hollywood, they don't mind a few of these conservatives, as they can brag about it during party invites and all: "Yeah, fancy whore-derbs, heated pool, they'll be a collection of vases from the poontang dynasty, quaaludes, fine sensimilla, and a couple of "conservatives ..." "What?" "Con - serv - a - tives!" "No, they're not from the poontang dynasty, that's the vases... just be there or be square; you'll have a blast, baby!"

After reading the "Eat mor Shark" post of last week, a reader mentioned, because he was irked by not remembering one of the main actors' name (the fishing boat captain, Quint) in "Jaws!", Richard Dreyfuss. He was Mr. know-it-all-scientist Matt Hooper in the movie. Apparently, Dreyfuss, though dissing President Trump earlier, at least is supporting free speech. Fancy that, an actor FOR free speech, and he declared this while talking to Tucker Carlson, no less. I need a miracle (like this) every day!

"He's either very very smart or very very dumb.", says Captain Quint. If he's not talking about the shark, but the typical Hollywood actor, we can safely narrow it down to the latter. 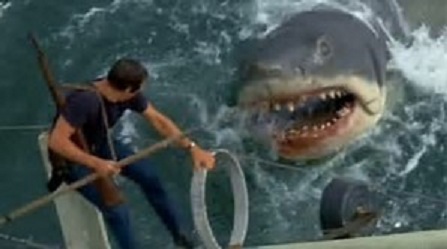 Moderator
PS Sorry, Mr. or Mx. Apakoalonek for taking so long to get back to you.

Peak Stupidity will take your comment under advisement. You may have even come up with material for a featured post here. It would help, good Sir, if we knew just WHAT THE FUCK YOU ARE WRITING ABOUT!

Oh, please don't forget to follow the instructions for commenting, as you must have gotten grandfathered in. Good day.