I had always thought Texas might be the last holdout against the overwhelming frontal attack of stupidity that we are fighting (at least at this website, how 'bout y'all?). I guess one could figure the university towns would be an exception, or at least the universities themselves. VDare's Henry Wolff has an article (well, a bunch of tweets with some good commentary) entitled Marxist Prof. Gavin Mueller Thinks D.C. Whites Are “F***ing Insufferable . The professor at the Univ. of Texas is a nut, I'm guessing, but he didn't get officially reprimanded in any way for words that would be a firing and shunning offense were the racist words reversed.

Hey, but it wasn't all that usual anti-white BS that got me to writing tonight. It was the professor's tweet here: 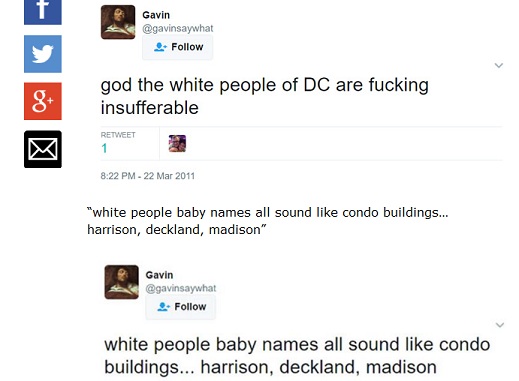 Hey, I was all over this kids names thing way, way back, as I discussed the missed opportunity of naming my kid after a man of the cloth, you know, like Amos Moses. You're stealing my material, Professor Mueller! If you're gonna steal my material, get it right - the kids aren't named after condominiums, jackass, they're named LAST NAMES as FIRST NAMES. The condo buildings you mention are named after people, and we use LAST NAMES to name things after people. What did this guy get his PhD in, anyway?

Oh, yeah, you're a sick man also, but that's not what got to me. Quit stealing my material!

Oh, and one more thing: Whose parent would you rather be, anyway, Madison or LaTundra? We could just go back to the Biblical names. No, not just Mark and Mathew, but how about Methuselah, Malechai, Jedediah, Zachariah, and Jumpin' Jehoshaphat? Let's put away the Dr. Phil books and get real with these kids.

Buck Turgidson
Buck himself lives in the midst of these awesome, self-important people. Most are a big pain in the ass. They are BORING and decidedly unfunny. Stuffed shirts with no sense of humor. SJW-level hypersensitive. They aren't as smart as they think they are. They are not very interesting people and they all seem to have the same experiences that were cookie-cuttered out for them by their wealthy liberal parents. If they sense you are not a fellow communist SJW feminist, girrrllll power, men suck, i love diversity traveler, they do not like you. If you work with them, they will do their best to F you over. Terrible people to work with, they always are right. Hey, I need the job and the $$. The women think they walk on water. The men are strange. they all are arrogant. How is that for a slam --
they rate it. Help, let me escape back to the midwest and some sense of normalcy and humility.