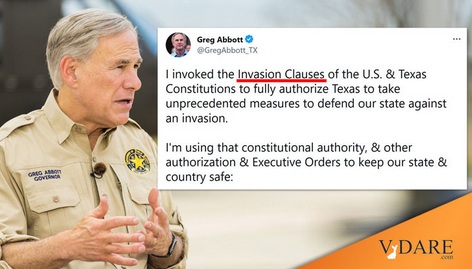 The prolific* new writer A.W. Morgan at VDare.com has a quick post up with some good news from the Republic of Texas. He reports Abbott Goes There: Declares Invasion At Border Under U.S., Texas Constitution. They've had the TX Constitution since, what, the Alamo? OK, the last un-amended one was ratified in 1876. The United States was formed for a common defense in 1789. The border invasion has been going on for arguably 40 years - I'm going by just before the time of the Reagan-signed amnesty bill of 1986.

So in other words, what took these people so long? If the Potomac Regime was going to let this invasion go on, and oftentimes even ENCOURAGE it, the State involved have every right to fight off the invasion. Is it better late than never, or just too late?

Citing Article 1, Section 10 of the U.S. Constitution, and Article 4, Section 7 of the Lone Star Constitution, both of which empower him to repel an invasion, Abbott informed judges along the border of his plans.

No State shall, without the Consent of Congress, lay any Duty of Tonnage, keep Troops, or Ships of War in time of Peace, enter into any Agreement or Compact with another State, or with a foreign Power, or engage in War, unless actually invaded, or in such imminent Danger as will not admit of delay.

GOVERNOR AS COMMANDER-IN-CHIEF OF MILITARY FORCES. He shall be Commander-in-Chief of the military forces of the State, except when they are called into actual service of the United States. He shall have power to call forth the militia to execute the laws of the State, to suppress insurrections, and to repel invasions.

There you go. It all looks completely on the up-and-up. Go Governor Abbott!! I'll leave you all with a screenshot of a tweet with more details: 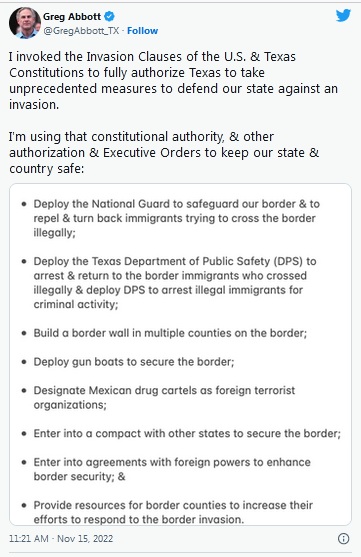 * Prolific, indeed. As I was writing this one, I seen a new post he's written called, uh oh, . This bit (from an Acting Chief Patrol Agent, no less) in a tweet, could have come straight from the Peak Stupidity comments section: "Following a 911 call for help in freezing temperatures, Border Patrol agents encountered 6 people near Troy, Vermont. 4 were children under the age of 5. Thankfully, everyone was quickly located & brought to safety. This is NOT a safe or acceptable way to enter the United States." Brought to safety where? Yeah, traitors abound.

** That Part 1 of the Appendix is some mumbo-jumbo about bonds that I don't see how has anything to do with the Governor as Commander-in-Chief. Paging Adam Smith, commenter Adam Smith, pick up the green courtesy phone comment box.

Moderator
PS: I feel a lot better knowing that you can't figure out what Amendment I has to do with Article 4, Section 7 of the Texas Constitution either, Mr. Smith!
Adam Smith
PS: Good afternoon, Mr. Moderator,

"A temporary provision can provide that the proposed constitutional amendment have a limited duration, but this is an exceedingly rare occurrence."

Lol... So much for limits on amending the Constitution.

Any idea what those proposed amendments are? (Were?)

Remember when the state didn't have a Veterans' Land Fund and a Veterans' Housing Assistance Fund? I guess they can't just grant a League and Labor to veterans anymore...

Yeah, I don't see what that has to do with the governor's powers as commander in chief of the national guard either. Might be helpful to know what those proposed amendments were and if they have been repealed or altered by some subsequent house joint resolution or temporary provision.

Call me crazy, but I don't think "government" should be able to go into debt. The criminals masquerading as "government should live within their means and stop spending money that doesn't exist.

https://media.gab.com/system/media_attachments/files/120/514/746/original/05abe26c61c89419.png
Moderator
PS: Indeed, Alarmist. Gov. Abbott has been a squish before. All hat and no cattle, they say.
The Alarmist
PS

We can only hope the deeds are as promising as the words.