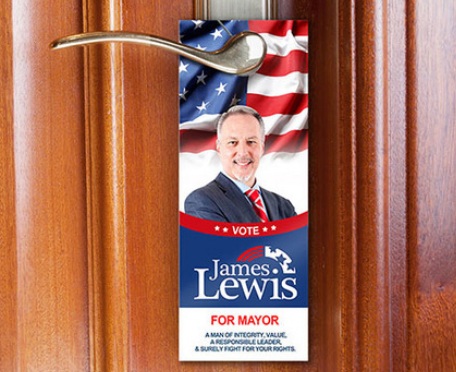 (File photo above. I have no idea who the guy is.)

I have no argument against possible comments from readers like "You were wasting your time", "Voting is a waste of time", "We're not voting our way out of this." or like thoughts in other reader's heads. However, my wife wanted to go out and help the local GOP candidates for one morning, as a family outing. (Plus, there were doughnuts.)

I can sit here and stew about everything and take some of it out with blog posts. Maybe going out and "doing something" (really??) would be good therapy. It started out that way.

At the GOP office, there were about 6 young people running things. They had stacks of different campaign literature, maps of the hot spots to visit, and yeah, coffee and good doughnuts.

Since my wife noted that she normally saw old people involved, such as at the polling places, I told her afterward what the young people were about. I bet some were related to candidates, but all have some political ambitions, even if it's just getting to work on campaigns for the big guys. They may not want to be the next candidate ever, changing the world, but they want to be political staff or policy wonks. This is a hobby which most would like to do for a living. They don't have the attitude I do, as in, we're heading for disaster, and soon, and, though the voting probably won't do anything, the actual politics is serious business now. These young people think that, win or lose, this show will go on. It won't, but I didn't disabuse them of the notion.

We were glad that the young volunteers didn't want us to knock on doors, but rather just hang flyers on them instead. Talking to people for even 5 minutes per house average would take up much more time. (We only had the morning - less than 3 hours by that point.) Additionally, nobody in my family is the salesman type. Peak Stupidity has ranted enough about salesmen to have a whole topic key on them - here. I may have had enough of salesmen, in general, but I do respect what it takes to take the continual rejection and occasional abuse.

It was a beautiful day to walk the neighborhood, that is, the part in the map with the boundaries that I believe were statistically calculated to make the best use of the flyers and our time. Early on, we bought a couple of items at a yard sale early on that we had to carry around the rest of the morning. Yard sale notwithstanding, those people were nice and I think politically reasonable. We had some sort of half-assed pattern in covering all the houses, and it was enjoyable... up until this one guy...

Yeah, well, as I walked up I mentioned to him one thing about the change in the US Congress district boundaries, OK, yes, gerrymandering, and from his reply, I understood he was not down with what I was about to give him. "OK, well, I'll save the piece of paper, cause..." (cause I had a "killing the planet" joke coming), but, before I could turn around the guy said "scram!" in a menacing way. That set me off, because, as I wrote, I am not cut out to be a salesman. "We don't agree, but you don't need to be a dick about it." It got a little worse, I left, and I realized that this campaign therapy was a failure.

It got worse yet around the corner. Apparently it is NOT OK to go on porches of people who don't agree with the literature you're handing out. It's where the mailman, UPS, FedEx, and the Amazon guy go, though. Yet, two houses in a row had people who came out bitching. It might have been 3 houses, but by then I'd replied and headed out of bitching range down the street. I don't know how that happened - I really think some app was involved. We had only about 15 flyers each average by that point, so we headed toward home and passed them out with no trouble. (I told my son, for the one house with the Ukraine flag and the known lefties, that this one was just for fun.)

This is not my kind of therapy. I know what psychologist Jordan Peterson would have to say about it. We'd have been much better off staying inside and cleaning our rooms.

Well, OK, that was a week of eclectic stupidity. We'll finish that thing about Affirmative Action next week, but this "forgive and forget" Kung Flu thing has really got our, and apparently a whole lot of others', ganders up. We'll have more on that, at least one about the Naomi Wolf article linked to by commenter Dieter Kief. They'll be that election too... I hope my family turned the tide, but ... if I'd only been nicer to that one guy ...

Dieter Kief
PS
This is quite something. I mean: Qick witted journalist Whitney Webb talking to Glen Beck about the US government being run by - - - criminals since - - - decades:

PS
Gentlemen - this is one more meta-analysis of the very old indeed philosophical trope that being for or against something should be done carefully, because this alone is already distorting. Too abtract? - Let Mr. Richard Dawkins and Steven Pinker explain, please!

Johann wolfgang Goethe, for example (there's lots more of this stuff, of course - I quoted an old Pomerian saying in that vein with regard to Mr. Admam Smith's Robert Perry-example concerning the Iraq war...

People hate what they don't believe to have done themselves; that's why they are so enthusiastic about their party. Even the most puerile thinks to do just the best and thus to improve all the failures of the world, with whatever idea crosses his mind. (Maxims And Reflections, No. 846)

***I admit that I even have the hypothesis in the back of my head for some time now, that the bulk and the core of social psychology (as long as it is reasonable) is a reformulation of old insights. - - - (Contradictions etc. welcome!)
Moderator
PS: I'm just now reading your articles, Alarmist:

"According to the RNC’s amended complaint, the county’s signature verification board included 23 Democrats, 33 nonpartisans and a “mere” eight Republicans.

“In this state's most populous county, it is simply not credible for the Registrar to suggest that he could only find eight Republicans qualified to serve on this board, particularly in light of the Registrar's similarly skewed hiring of Republicans at polling locations around Clark County,” attorneys for the RNC wrote in a filing last week. "

Wow, that's a BLUE State! Can't find 8 of them even. That's the thing about the ctrl-left. They go all out, playing hardball, while the right tries to play fair.

"Judge Liburdi also banned cameras or videotaping of any ballot trafficker at a drop box." (Is that really his name?) So, even investigations of fraud are banned in this way, much less anyone ever stopping it from happening.

Yeah, who counts the votes is important. The ctrl-left has played the long game. Can we replace all the Soros D/As and Secretaries of State over the next few years? I don't know it it'll matter. There's no time left for the Right to play the long game in response to the long game of the ctrl-left.
The Alarmist
PS

We aren’t going to vote our way out of this, but another election or two without a meaningful change in direction might finally stir enough people to go out and make a difference in other ways.

Hey, I took this one serious enough to make sure I was in the US to vote personally. But I will still wonder as the machine swallows my filled-in ballot who it thinks I voted for versus for whom I actually filled the oval. We need to get back to hand-couted ballots with reps from all candidates present to witness the count. Even that will have its pitfalls in places. What frosts me is reading stories like this, because it shows the courts are in on the fraud: