A tale of 2 Countries (for picking blackberries)

This is something I'd wanted to write about since a few summers ago, when I spent some time in China, and some time in western Washington State. It is a story of how things are when you have just too many damn people.

We were visiting some family in-laws in a place in central China that I might call the "West Virginia of China". This is not a slight to W. Virginia or W. Virginians either - it is just remote and hilly. This location was out of the way enough to where the Japanese didn't bother to invade the province, and Chairman Mao did not visit, but he did starve many of them - they didn't get to miss out on that deal unfortunately.

Anyway, though he could speak zero English, and my mastery of Chinese is close to nil, this particular gentleman took me for a hike out of the "small town" (in China, that means less than 1/2 million people) up into the hills and about 3-5 miles away. It was nice to hike, but this "wilderness" was not pristine, and I could tell there was no place we saw where nobody had been recently. Now, once in a while this guy would stop, pick some small nowhere-near-ripe red blackberries and give me half and we'd eat 'em. They were pretty sour, but you know, "when in Rome" and all that, and I didn't want to insult the guy. The berries were edible, but just sour, and I've got a tough stomach. No problem, but why pick these?

I had the answer really before we ate the second bunch of blackberries. Even in this supposed wilderness, about as far as you could get from anyone in this remote province, there are too many people about that would come by to get the blackberries that no one would wait until they were ripened. So, either pick the sour small red ones, or don't get any at all. I confirmed this when we got back to the house where people spoke some English.


(Blackberry file photos: "Wilderness in China vs. City of Seattle) 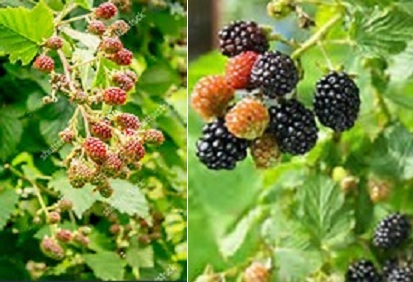 It's sad when compared to our still somewhat wide-open country. In Seattle, Washington, right within the city limits, in the park, during the right months, one could pick thousands of perfectly ripe juicy blackberries to the point of needing gallon buckets, if you don't mind getting pricked a bit. But then, though Seattle may have the land area of a major Chinese city, it has under 700,000 people in the city limits, that of a medium village in China.

Do you know that China had more people, over 400 million, in the middle of the Qing Dynasty, back before 1900 AD, than we have now? It's been overpopulated for a long time, and keep in mind that, though the land area on a map looks close to that of the continental US, the western 40% of that is just Tibet and Xinjiang , both just mostly barely-inhabited mountains and high desert. Then the other 60% is mostly mountainous. I'd estimate the population density of China as 15 X what we have in America, not 5 X, as one might think from a glance at the globe.

Can we learn a lesson here? Do Americans want to live like that, with no way to really get out away from anyone and see the land in it's pristine state? See, the Chinese have a long history of living close together - even out in the country, so to speak, they live in villages of a few hundred and farm their small plots around these villages. Here, we all can realistically dream of living on 10 acres or more, and we like to be where we can't even see any neighbors! The treehuggers don't want to talk about immigration though, remember; it's not nice, and they all want to be nice, even it means their children will inherit a crowded hellhole. People might call you names and shit, can't have that, right?


The generous unripe-blackberry-picking gentleman that I went hiking with only knows what's there in China. It won't happen, I guess, but I had an urge to get that guy a plane ticket and take him out into the Olympic mountains in western Washington. It wouldn't be to show off really, it's just that he'd be the type to be deeply impressed by the beauty there.

Moderator
Oh, sorry, she just tweeted me back - no can do - she's worried that the Deutch customs man will just eat them upon arrival.

See you on unz, Dieter.
Moderator
Thanks for your reply, Dieter. Commenting on Peak Stupidity is NOT QUITE at the same robust level as that on iSteve. I will see if our webmistress can email you some decent blackberries.
Dieter Kief
Yes.