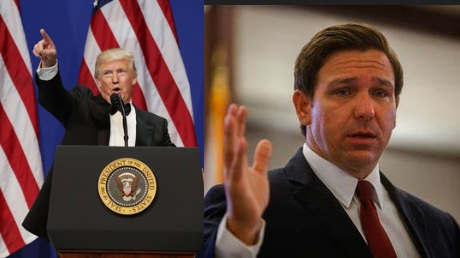 This is the BIG, the EXISTENTIAL* issue, the Immigration Invasion. Whoever in the match-up would do a better job on this issue as President is who I'd want to win a theoretical election**. Both of these men have a record on fighting this battle, in different ways, of course, at Federal vs. State level.

Unless DeSantis is a complete liar, both of these men would be, and have been, better on this issue than any other big political figure who'd have a chance. The loser of this round would still beat all hell out of anyone else prominent on this issue (again, politicians with a chance, not real Americans like me or Peter Brimelow). That said, Peak Stupidity has been extremely disappointed in the results from President Trump of '17-'21, who had had so many Americans' hopes up for a few years. We've written quite a bit on this topic, and for me there's no way to be sure how much of the failure has been due to incompetence and how much due to the tremendous forces that were arrayed against President Trump.

This may sound like a continuation of a good news / bad news joke, but I will now remember, from our post President Donald Trump: the Bad, **the Good**, and the Ugly***, that President Trump did seriously bring the immigration numbers down. I was pretty excited about this when writing that post just before the election in '20. (Humorously, VDare's "Washington Watcher II", writer of the post I discussed, was thrilled by the NY Times unintentional endorsement of the President on this issue.)

There were many under-the-radar moves that Trump made, both with legal programs and illegal entries of various sorts and various people. I was excited because it's the numbers that matter, and the first thing you do when in a deep hole is STOP DIGGING.

The problem is that Trump brought the digging down to a significantly lower rate, but he didn't lock up the excavators. Most of his moves were done at the bureaucratic levels in the agencies involved. I don't recall so much legislation being passed - no, he can't do it, but the idea was to get support and get it done. He made those deals with the Central American leaders to stop the caravans,, but, again, they were just deals of Trump's, not anything permanent. This would all have been fine, a great start at least, were Trump President-for-Life AND immortal. Neither is the case.

There's no "big beautiful wall". The winner of the '20 cheat-fest rolled back former-President Trump's policy changes one by one, early on. The numbers since then have already more than overwhelmed the number of immigrants that Trump prevented from coming. And they keep coming, and coming, and ...

Candidate Trump's immigration policy was very good. He read Ann Coulter's book. His feelings and his love for this country had him on the right track. However, that was Candidate Trump, running his mouth about all it all. When it came down to getting significant things done in any permanent fashion, President Trump let us down.

What about Florida Governor, and prospective GOP Presidential candidate DeSantis? Could he be the same or worse, a liar who is just pandering to get the Conservative votes? That's possible. Could he have beengrandstanding with the most excellent Martha's Vinyard caper, as I 've read commenters maintain? Nah. Nobody who wants to stay in good with the UniParty elites and Globalists who run things would do something like this. There are ways of kissing their asses and getting exposure. This would not be the way.

Because he doesn't have such a long record of speech and action on the immigration invasion, I don't have so much else to write about DeSantis on the issue. However, VDare writer James Fulford helpfully transcribed a speech of his to the National Conservative Conference mid-September - FL Governor Ron DeSantis Addresses Mass LEGAL Immigration: “Just The Sheer Number Of People Overwhelms Communities” Please read that quick post which speaks for itself about DeSantis views. No, I don't think he's lying his ass off.

Both Trump and DeSantis realize that the immigration invasion is a bad thing. They both understand the Americans want it stopped. The question is, who would do a better job at actually stopping it? From the records, the personalities, and the intelligence levels of the two men, I'd have to go with DeSantis again.

* That post is from very early on in the life of this blog. The title is: Too many posts about immigration, you say? - GIT! OFF! MY! LAWN! BLOG! ... (We took a pretty tough stance back then, haha.)

** I write that because Trump may be embroiled in or distracted with suit or even be a political prisoner, and I haven't read for sure that Governor DeSantis will campaign for the office.

*** Yes, it's the 2nd of a 3-part series with The Bad and The Ugly. (The latter was about Zhou Bai Dien, though, not President Trump.)

While I can't prove any of this, I think DeSantis is a member of the same group that we always see in office. Controlled. Trump may be the same but...if Trump gets back in office they have so savaged him he may just run all over the deep State and totally crush them. He could. He would have support for it. It seems, I read that the reason he ran in the first place was because Obama made a stab at him at a dinner and he doesn't let people get away with stuff like this. He's got a lot of pay back to do and every bit of it favors us and disfavors them. I want Trump back in office not because I think he did what should have been done but because I think he would want revenge and the people he would make pay are my enemies. Not an enlightened notion, but, we take what we can get.

"...Donald Trump was the focus of President Obama’s jokes at the 2011 White House Correspondents' Dinner. It was there that Trump resolved to run for president, adviser Roger Stone tells FRONTLINE..."

Here's a novel idea. Stop immigration and deport them all by not letting them vote. You say."YOU CAN'T DO THAT". Oh yes they can. Look at the Democrats trying to pass a bill that allows voting 5 days after elections.

Any fool can see that they will just keep voting and adding up votes until every election the Democrats win.

Now you might say that can't be legal, but it is. Let's see the exact Constitutional reference.

The Constitution provides that…

“…Article I, Section 5, which provides “Each House shall be the Judge of the Elections, Returns and Qualifications of its own Members …”

There's not a lot of wiggle room in that. But what is good for the goose is good for the gander. I’ve talked about how powerful these Constitutional provisions on voting and the courts are before.

1. Limit the vote to over age 25. I like that one.
2. No one on welfare able to vote.
3. They could rescind all court decisions on regional based Senates in the States.
4. Make it where only people registered to vote six months before elections could vote.
5. Make sure all the elections are hand counted with a picture of every single ballot is taken and uploaded to the internet while it is being counted. Make sure that all voter roles are uploaded to the internet six months before the elections, with no more names added or any voters after this. This would vastly cut down on fraud. Make sure balanced party and independent poll watchers are present, or have all votes invalidated.
6. No immigrants can cast any votes in Federal elections.

Now some say the courts would overrule it but...if they tell the courts no way they can rule on any of this they can't.
Reference again,

“…In all the other cases before mentioned, the Supreme Court shall have appellate jurisdiction, both as to law and fact, with such exceptions, and under such regulations as the Congress shall make…”

“…with such exceptions, and under such regulations as the Congress shall make…” The important part.

This means Congress can explicitly tell the courts that they can not rule on...say...regional representation. Congress can declare that the courts can not rule on things like, no one on welfare to vote or that all voters must have a high school diploma or a whole bunch of things that would IMMEDIATELY crater and destroy Democrat voters and drive them into insignificance. Overnight. To counter this would take some serious, major illegal bullshitting by the courts. Real bad stuff. Not that they wouldn't do it but the worse they get, the more it's evident that they are nothing but criminals. People say they don't care about doing illegal stuff but they know that there's some serious possibility of them hanging from their necks on the lamppost. The more illegal stuff they do the greater the possibility that they could suddenly trigger some mass uprising.

We could overthrow the whole entire globalhomo in the US with just a majority vote in the House and Senate and then follow through and crush them, as they will surely do to us if we let them. I assure you once politicians learn that the present mobocracy, which is really rule by large city centers, immigrants and mobs, no longer brings in votes. They will stop catering to them.

I talked a bit about Regional representation in the State Senates in this thread.


Later I found that legislators could make whatever qualifications they please for voters. These two things are like Kryptonite to Democrats. They could be ruined, fast. I have been seeing lots of posts by Democrats about changing the Constitution. Maybe one of them has seen me posting this stuff. They damn sure don't want attention on it because the idea that all their plans can be ruined by just one majority vote must be giving them the hives. But it can. Perfectly legal and we don't have to do any sceevy illegal stuff like they do to stay in power.
Moderator
PS: That'd be real nice, Alarmist. There's got to be some little bit of Federal land on that island, and, if not, then there's eminent domain - "sorry, Mr. Obama, it's just gonna cut into a small corner of your lot. Your girls will be fine. They don't look like anyone an illegal tattooed Venezuelan would likely sexually assault."
The Alarmist
PS

I’ll believe DeSantis is for real when President DeSantis builds a refugee outprocessing tent camp on Martha’s Vineyard, because that seems to be the only place from which libtards will allow their sacred migrants to be deported.