Thrown under the bus on the road to Covid~Zero 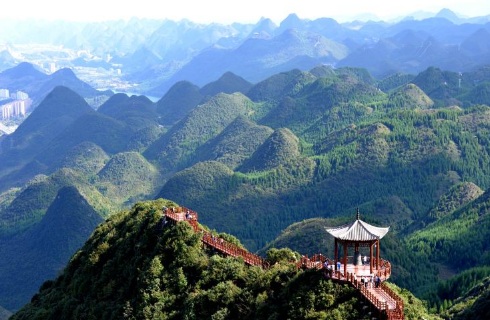 I have seen this place. It's like the West Virginia of China, but that's not a crack on West Virginia. It's just remote - hell, the Japs didn't even bother with the place, although Mao and his compadres stopped on their Long March to have a conference in the northwestern Guizhou city of Zunyi. Chaing's Nationalists hadn't care enough to defend the place. Guizhou is remote and mountainous. Like W. Virginia, you can't get anywhere there in a straight line. (However, the Chinese been doing a hell of a job fixing that.). Unlike in W.Virginia, the mountains are much steeper.

The picture above is realistic, because it shows some nice scenery while that smoggy city area lies below. In this province, like anywhere in China (not counting Tibet and Xinjiang in the west), a "village" there means, oh, a population of about 1/2 million people or so. The municipality around Guizhou's capital Guiyang has over 4 million people in it. 38 million people live in this remote province. "How many divisions does West Virginia have?"

The ridicrous Covid~Zero* campaign that the Chinese central government has been waging is no longer just in Shanghai** In Inside info on the latest Oriental Kung Flu Stupidity, we had personal information from a LOCKDOWN (just a minor LOCKDOWN, mind you, of an apartment complex with 25,000 people) in Canton. (They're calling it Guanzhou now, for some strange reason.)

The Covid~Zero campaign is one of THE stupidest portions of the Kung Flu PanicFest that I've ever heard about, and that includes in America! It's all over that country now and not all simply stupidity-based, with plenty of evil intentions of absolute control playing a big part. This latest news is from that remote Guizhou, unfortunately not quite remote enough anymore to avoid the stupidest of shit.

What sounds like a small story that I've gotten from accounts from my China source from people in Guizhou has a PanicFest connection. Based on a few hundred people having (being?) cases of Covid in this province of 38,000,000 people, LOCKDOWNS have been put in place. Those found to be in the Red Zone on their phones*** are being sent to quarantine camps, as is the regular policy. However, Guiyang did not have enough room for these people from the city's district of Yunyan. They "needed" to be bused elsewhere. Well, one bus full of these unlucky Chinamen overturned on a late-night (2 in the morning) run to the quarantine camp and 27 people were killed.

What's the big deal? In a country with 5 times the population of ours, there are going to be lots of traffic fatalities. They wouldn't usually warrant a news story outside the village or at least county. For this case, though, I'm pretty sure that most Chinese people, including relatives of the dead, know that this Covid~Zero business is nonsense and that the quarantining, hence the bus ride, was not necessary. The now dead Guiyang resident could have been at home with their families. That's why this story has gotten out.

Wikipedia is not very trustworthy on anything that can be taken politically In this case, it has a short page on this story here that seems pretty factual. My source used WeChat, on which the story got big, but then the suddenly quit trending ... odd that...

Of course, the Peak Stupidity blog cares more about America and Americans than China and the Chinese. If it weren't for these dead 27 Chinamen, and feeling truly sorry for the 1,400,000,000 others that are suffering from this most ridiculous aspect of the Kung Flu PanicFest, it'd be a feel-good story. "Whewww! America is not the Peak of Stupidity! USA! USA! USA!"****


* Peak Stupidity has had lots of posts on the Kung Flu Stupidity in China - go to the China topic key - most were written this past March through May, with a few stragglers since, like this one.

** Its start was there due to politics, as Peak Stupidity discussed.back in April in The latest on the Covid-Zero Shanghai Shitshow.

*** Meaning Covid cases, that is, if the database is accurate.

**** I'm thinking 4-D here, as Donald Trump does with his policy decisions - the peak has a time component and 3 spatial components. (Not sure what altitude has to do with it, until you get over 18,000 feet - gets hard to think straight for long.)

One COV-LARP To Rule Them All
PS Just in time for the latest Dominion/Smartmatic extravaganza.
The Brandon clown car cavalcade won't have very much left to destroy.
The biggest mind funker is how the bankers finance the commies in a Russia 1917-1918 style or nothing new under the sun?
Moderator
PS: Thanks for the pictures, Adam. The place looks like those posters of ancient China, but then these kind of sharp mountains are all over the place there. That's why I see China as having well more than 15 times the population density as the US, because much of it is barely livable (hard to build or farm on).

It's all beautiful from a distance, but then there's coal smoke in the villages (of 100,000's of people) and too much trash around. However that was my impression from 1/2 to 1 decade ago. They really are cleaning up the place, and when the whole Chinese country decides to do something like that, they do it in a big way. Maybe they'll have big forests in 50 -100 years with real, tree-sized trees. (They can take down our for their lumber needs - "he who hath the gold, maketh the rules" - Confucius(?)

Have a good morning!
Adam Smith
PS: Greetings, everyone,

I don’t ask my son about anything controversial via WeChat- can’t be too careful. We haven’t seen him since the Fall of ‘19- we’ve not met his wife. I have to admit that China’s never been high on my list of places to visit, but I suppose we’ll get there eventually.
The Alarmist
PS

My wife invited me to join in watching a film because it featured a Christmas airdrop by the USAF folks at Andersen AFB to the various islands in the theater. She wanted my take on how authentic some of the airwork was.

Anyway, the squadron commander was a reasonably handsome female LtC, who my wife commented looked like a lesbian (a gal has to be quite mannish for my ordinarily-PC wife to make that comment aloud). Anyway, it’s all good, because the handsome LtC was married to the black brigadier base commander.

Mr. G, I’d prefer two lovely but lesbian gals of any race not reproduce. They’re playing on the wrong team.
Moderator
PS: Mr Ganderson, I'm glad you had and will have a good time with your old Minnesota GWN (Great White Northern) friends. It's very good to get away from the whole thing for a while.

On this part: "I haven’t spoken to my son who just moved to Guanzhou- I don’t wish to alert Mr Wong, who’s sure to be monitoring any WeChat conversations…" Are you saying that you just talk via phone, not at all right now, or just are very careful about not asking questions about the stupidity going on there? I hope he has a chance to visit soon, so you can catch up and just to seem him, of course. If you don't mind my asking, have you ever been over there? (I mean before 01/20, of course, because it's been not worth going since then.)

I don't mind the O/T comments like this one bit (so long as one isn't selling viagra... to lesbians... wait...

Agreed, though, it's a real shame. I have not met any pretty lesbians that I knew were such, so I tend to think of them like that driveway paver, haha.
Ganderson
PS

Sadly, I have nothing to add- I’ve been at my 50 year HS reunion- lots of fun: I got to be “Lars” again for about a week, and forget that our society is circling the drain.

Today we’re going back to MN for a couple weeks to sit by the lake and ignore the chaos around us.

I haven’t spoken to my son who just moved to Guanzhou- I don’t wish to alert Mr Wong, who’s sure to be monitoring any WeChat conversations…

And off topic Mr. Mod, but on my mind…

We attended a wedding celebration yesterday of my son’s (the one in China) high school girlfriend- he dumped her (she’s a lovely, talented young lady) but the wife and I have stayed friends with both her and her family. She married a very nice Irish chap; they now live in County Galway….

…anyway among the guests was a young lady my boys grew up with attractive- a DI athlete (soccer) , who grew up in a “Heather has Two Mommies” household. Sadly, she has taken the Sapphic route- her partner, also a D I athlete (hockey) was spectacular; of course we had a great conversation, as hockey people will, made better by the fact she went to high school in Minnesota.

So, what’s the problem? I guess it’s that we have two bright, attractive young women who are out of the reproductive cycle- is this something that, societally, we should be, in ways subtle and not so subtle, encouraging? I know how most of us would answer.

Part of the issue here- perhaps a big part, is that lesbianism, well, some of it is probably innate- the gals the Z Man describes as looking like the guy who resurfaces your driveway; but a lot of it is socially conditioned- way more women care way less about sex, thus more lesbos and bisexuals among gals. This can’t be good for the long term health of our society- and I’m convinced many, many of these gals are LARPing. Not to mention I’ll bet that couples like this have way fewer kids (not that I think it’s good to raise kids in such environments…) and setting themselves up for a miserable old age.

I wonder, too, if the growth of women’s sports has led to a rise in lesbianism?

Mr. Mod, feel free to delete this comment (or yell at me) if it’s too OT!
The Alarmist
PS

I dunno ... the US might be relatively better at the moment, but High Chancellor Jao Bai Den seems intent to take the Western world to a cold dark place.
Moderator
PS: ".. . something else is in play.". No doubt. There's the political aspect of Xi v Jiang, but that doesn't explain it all. This CCP wants Total Control. They seem to have gotten it.

That's why I've been writing people in comments that we are still in better shape here, even with a quickly declining economy as opposed to the wealth-creating Chinese one. We have a much easier way out than the Chinese do. I've lost hope for that place.
The Alarmist
PS

They know Zero COVID. is a fantasy... something else is in play.