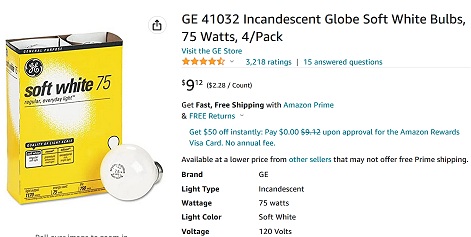 Unlike one of Peak Stupidity's normally straightforward Inflation calculation posts, this one's a doozy in 2 ways: 1) This comparison between then and now results in "extra big-ass fries inflation and 2) This is more complicated, with substitution, hedonics* and something related but different involved - comparison of differing recurrent costs with use, as compared to fixed (purchasing) costs.

There I was, trying to think of another inflation post to write, and a light bulb appeared above my head. This was at Lowes, you understand, and there were actually 8 light bulbs ... in each package, on a shelf above my head. Ahaaa, there's your post.

See, I haven't bought light bulbs in something like 13 years. The reason for that is also 2-fold: 1) I was in my first phase of prepping, with a big lull till more recently and 2) The US Feral Gov't had gotten involved in light bulbs, for cryin' out loud, you know, some penumbra of one of the clauses in that lost Article VIII of the Constitution. No kidding, President Bush was telling me I could no longer buy incandescent bulbs pretty soon.

Before I go claim this as "see, another example of higher inflation than the BLS boys tell us", let me provide that caveat. Hardly anyone buys incandescent bulbs - in fact till now I'd thought they were completely verboten. Apparently, they aren't, but, since most people buy the LEDs now - I completely missed the compact fluorescent era, per my own doing - the supply/demand numbers are completely different. Not many people want these bulbs, and not nearly as many are made. Do the plants in China not operated on the same economy of scale as the (I'm pretty sure) American plants operated in '09?

Still, let me do this one calculation, with that 3/4 lifetime also taken into account. Without the bulb-lifetime adjustment, I get a whopping 17.3% average inflation rate over the last 13 years. (Granted, the last year may comprise a bigger share than the rest.) Then, to adjust for that 25% lower lifetime than the old bulbs, we get 19.8%. Whaaa! Let's get back in the DeLorean, Doc! Someone set this thing to 1979! [Said in that hilarious incredulous Michael J. Fox voice.]

There is that substitution factor, as our baskets of goods (hell, even the baskets have been substituted) would not include incandescent, but instead, LED bulbs now. Let's forget that maybe I like incandescents better. I bought LEDs due not just to this incredible inflated price I didn't want to pay, but for bulb-lifetime reasons for this particular purpose.

Then, as I noted above, there's the recurring cost of electricity use. These bulbs have "wattage" ratings, but that's due to the fact that bulb buyers don't think in lumens - the unit of light intensity, "luminous flux" to be precise about it. We are used to bulbs rated by Watts from the old incandescents. Therefore, the current ones are advertised by "wattage", but with the actual energy use given. In this case, for the same light output, these use 10W. The old 60W bulbs use, there you go, 60W. Most of that energy goes to heat, OK in the winter, highly uncool in the summer. I do appreciate some new things!

I'm paying over 13¢/kWh for electricity. The LEDs use 0.01 kWh per hour, while the incandescents use 0.06 kWh per hour. Based on the long-lifetime of over 14,000 hrs (I believe the way one should do this), the savings in the recurring electricity costs will be a whopping $92 over the course of the alleged LEDs lifetime! That's 13 changes of the incandescents in that time, and, if one's time is worth anything, that adds onto the savings.

So, we have had a lot of deflation in light bulb fixed AND recurring costs due to inventions that result in substitution. Can this be the case for lots of goods and services? I don't know, but the problem is keeping ahead of the FED.

Well, that was fun. Let's see what the conclusions are:

2) If you really want incandescent bulbs, yes, inflation for that product has been 19% average, over the last 13 years.

3) The LED bulbs are not my hill to die on, and to me they are an exception to the law commenter MBlanc46 has told me at least once - "Things always get worse."

Finally, how many Luddites does it take so screw in a light bulb? The math says about 14 times as many, on average.


PS: I wonder, since the bulb-ban was lifted, will incandescent bulbs become like vinyl record albums, cooly retro? I've still got a some in the attic. If thats true, I wish I'd bought 50 cases, but then, come that first Richter 8 earthquake, I'll have lost my ass!

** Now, some of these specs annoyingly give lifetime in years, based on some hourly use that I didn't know. I was lucky to find one set of specs that gave me the number I wanted here.

I switched to LED bulbs several years back but I do use incandescent bulbs in the crawl space under the house in the winter to help keep the pipes from freezing. (I turn the light on when it gets under 32º but I probably don't really have to until 27º or 25º).

It seemed that each used bulb would last about most (sometimes half) the winter. I guess the life was shortened by the cold to hot (off to on) cycles. Then I ran out of old bulbs and found out it's kinda hard to find new incandescents, and yes they are more expensive than they used to be. But the brand new incandescents really don't last that long. Seems like I'm going through 3 or 4 new ones each winter. I've even tried the "rough service" bulbs, but they don't seem to last any longer than the standard bulbs.

Hmmm...? I guess they just don't make these things like they used to.

☮
Moderator
PS: NoName, I'm sorry I can't tell who this is - when you comment again, let me know, and I'll edit it in.

In reply though, that is one fantastic light bulb. In my experience, those 1,000 hr bulbs do give an average life-time near that. For a while, I was curious about it and would write on our chalk board when I put in new bulbs - ones that stay on a lot (though not 24 hrs/day). In general, the numbers were in the ballpark of the 1,000 hr advertised. The reason I cared so much is that I have all those old bulbs, and I'd have been bummed it the shelf life was not so long.

I'd read that the start-up for a bulb detracts from its lifetime too.
PS I have an incandescent 60 watt bulb on a dimmer switch in a hallway at the bottom of my stairs--it is on 24-7 but is on a dim setting maybe 1/2 or less--it is at least 10 ears old--probably older--we have been in the house over 40 years and only changed the bulb a couple of times ever
Moderator
PS: Meant "... seal for the Argon gas at the bottom *OR* the filament ..."
Moderator
PS: Is it the seal for the Argon gas at the bottom of the filament that sets the obsolescence timer, Alarmist? In a post about buying bulk to prep for, if nothing else, inflation, I will remark on my wondering what the shelf life on these bulbs would be. The seals seem to have lasted longer than I'd have thought, so maybe the filament is the weak link.
The Alarmist
PS

Incadescents would last for nearly ever, but The Man engineered planned a limited lifetime to keep you on the wheel buying them.