My Pillow, My Phone

Peak Stupidity has this iEspionage topic key for posts that discuss the modern previously-unimaginable world of free and easy spying on anyone that the smart phones and other devices promote. The iEspionage doesn't just ALLOW easy access to one's information, but it turns the whole realm into a user-provided-content operation. Now the end-user espionage agency has no need for real spy work. Like Amazon's early-on bright idea of having its customers write the reviews, we provide the intelligence to the enemy.

I bet you at this point that any living ex-Soviet KGB, E. German Stasi, or American CIA agents (for that matter) are just eating their hearts out thinking how easy it is to gather intelligence now. "Listen, sonny, when we spied on people, we sat in crappy Soviet cars for a day and a half with no heat looking through binoculars! We'd have to dress as painters to plant bugs in lamps - I don't know how many times I got shocked by 240V! We would cut into sewer pipes to gather stool samples to bring into our unheated headquarters to inspect for food scraps! What do you people do? You sit in your Mama's heated basements in your pajamas, surfing the net and downloading pictures from The Cloud. Your marks text each other what they have for dinner, and if that doesn't happen, they've got pictures of their bowel movements posted on Facebook you can zoom in on! You call yourself spies?! Pssshawww!" 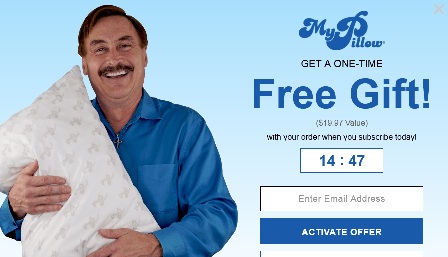 Let's see how things are in America now. The reader may not know of him but Mike Lindell, entrepreneur founder and operator of My Pillow* is one of Donald Trump's biggest boosters and a monetary supporter.

The news is that, because he supports "insurrectionist" Donald Trump, the FBI surrounded Mike Lindell's car at a Hardee's drive-through in . First of all, this is one new reason for me not to use the drive-through anywhere (with the exception of Covid pandemics). Let the lazy bastards park and get out of their vehicles to accomplish the fast-food beat-down.

Being very involved in investigating and documenting the '20 Presidential election CheatFest, I would think Mr. Lindell would be pretty wise to the ways of the Totalitarian ctrl-left. I'm not sure if ANYONE, however, is really ready for how Totalitarian and 3rd-Worldly the American Police State has become. It's not as bad as being taken political prisoner, but the confiscation of one's phone is a big deal now. These hand-held computers have our*** lives on them these days.

There are 2 aspects, I would say, of keeping the damage to a minimum were this to happen to you. First, there is the loss of the information for you, the owner of the device. Backing up the data is important, and it's oh so convenient to put it on The Cloud. Yeah, well, that defeats the 2nd aspect of it, the perusal of your data by these modern versions of spies. You can not use The Cloud and keep deleting info after back-ups, say, the pictures and videos, but keeping the text threads and phone numbers on it is necessary to make the thing useful. It's a pretty difficult task to keep any privacy if you carry a smart phone around. I've written about much of the possible iEspionage activities these things can accomplish, and probably DO accomplish, in this post, and much of it the laymen would have no idea are even happening.

What was Mike Lindell to do, in order to prevent the FBI from confiscating his ideas and plans? Basically, the modern Police State is hard to avoid. It's made worse when we have formerly independent Feral Government law enforcement agencies that are arms of the Potomac Regime. There were Libertarians and Constitutionalists calling America the USSA 20 years ago, before any of this iEspionage. That appellation is definitely appropriate now.

In Soviet Russia, spies spy on you. In modern America, you spy on self.


* My wife may have already supported Mr. Lindell with some purchases, but how many pillows to do need? Per a recommendation from an Unz Review commenter, I will see if we can buy some good towels. Target has many colors of China-made towels - they suck at actually absorbing water though.

** I first got to this story off a link that sent me to the UK Independent. What a biased POS of a site that is! To alert the reader to who Mr. Lindell might be, the only phrases used are "'Presidential election conspiracy theorist". OK, well, I didn't want to link our readers to that one, so I did a duckduckgo search. The first blurb was from the NY Post an outfit, that'd I'd mentioned in the intro of this post should possibly the new "paper of record". Their article used the same terminology used for Mr. Lindell. That's just shameful - no more paper of record support for you!

I gotta start bookmarking the reliably unbiased sites. I did not get to Mr. Lindell's MyPillow site for the news on this, but I'd trust a guy like him over ANY of the news sources.

Yep, it’s an ad. Pillow-guy is trolling the Federales.
Moderator
PS: Thanks for the towel recommendations, Mr. Smith. Alarmist, I wasn't sure if "sponsored" meant that those BB posts were ads. I guess they are joking with that too. Thanks.
The Alarmist
PS

Did you catch this MyPillow sponsored content in the Bee?

Mike Lindell Still Holding Out Against FBI Inside MyPillow Fort

“"We are besieging Mr. Lindell, but we had not accounted for the patented interlocking foam filling being so difficult to penetrate," said Special Agent Bob Janzen to reporters outside the MyPillow guy's fort on Wednesday. "This fortress of mattress toppers, Giza Dreams™ bed sheets, and pillows have formed an impenetrable barrier we have been unable to breach."”

"Once the Karens land in Florida, they have been instructed to wreak havoc on the locals by walking into establishments and demanding to see the manager, calling the police on black joggers, and driving slowly in the left lane. Locals have mobilized to prepare for the onslaught by building walls of sandbags and boarding up windows."
Adam Smith
PS: Greetings, everyone,

Mrs. Smith recently(ish) purchased some new bath towels from Land's End that are nice. Not sure, but it might be these...

Lol... My favorite phone app is also the flashlight. Pandora is kinda cool too.

As you know, I recently got a new smart phone. It's actually pretty nice, not that I use it much. (I use it as a car phone. Call home if I'm running late or at the grocery store with a question about what sort of product to buy. I also text with it.) It's fast and it has good reception in low reception areas. The wireless charging feature is also pretty sweet.

The GPS worked well the only time I tried it out. I don't often use GPS, but it might be nice to have next time I take a trip to an unfamiliar place.

But I have been reluctant to put any stored info in it. I haven't put any phone numbers in it. I clear the call and text logs (usually) after each use. I haven't even taken a photo yet. If someone masquerading as "government" were to seize my phone right now there is nothing to see. It looks like a new phone, even though I've had it for almost 7 weeks. I suppose at some point I will put some phone numbers in it and take some photos, but so far I haven't.

☮
MBlanc46
PS Opposition to the Uniparty will not be permitted.
The Alarmist
PS

My wife wondered why I recently bought a new road atlas. I told her it was largely because everybody’s GPS nav system will recommend exactly the same detour to getting around traffic jams leading you into yet another traffic jam.

Speaking of 6 Jan, if you caught Bill Mahr this week, he and one of his douchy guests was going on full bore about Trump’s coup. So much for “based” Bill Mahr.

Moderator
PS: Yeah, smart people don't carry smartphones, and smart phones make you dumber. Every app makes you more stupid in a different way. Got the GPS app? Can you still read a map? No. How about even picture where you are in the world? No.

I think one could make a case for a lot of the apps. Then, they are amazing and awfully handy. My favorite app? The flashlight. Haha.
Moderator
PS: I'd never heard this one, Alarmist - thought you were going to paste in
"California uber Alles", but that'd be the next post. Here's all the lyrics.

"I am your plumber, no I never went away
I still bug your bedrooms and pick up everything you say
It can be a boring job
To monitor all day your excess talk

I hear when you're drinking and cheating on your lonely wife
I play tape recordings of you to my friends at night
We've got our girl in bed with you
You're on candid camera, we just un-elected you, ha

I am the owl
I seek out the foul
Wipe 'em away, keep America free
For clean-livin' folks like me, hey, hey

But we ain't the Russians
Political trials are taboo
We've got our secret ways of getting rid of you
Fill you full of LSD
And turn you loose on a freeway, whee!

I am the owl
I seek out the foul
Wipe 'em away, keep America free
For clean-livin' folks like me

The press, they never even cared
Why a youth leader walked into a speeding car
In ten years or so we'll leak the truth
But by then it's only so much paper

You know, Watergate hurt
But nothing really ever changed
A teeny bit quiter but we still play our little games

This old gem from the DKs is evergreen.

The live version from Portland is more entertaining, but harder to follow the lyrics:

🎶 I am the owl
🎶 I seek out the foul
🎶 Wipe them away to keep America free
🎶 For clean-living folks like me !