TV inanity at the tire store 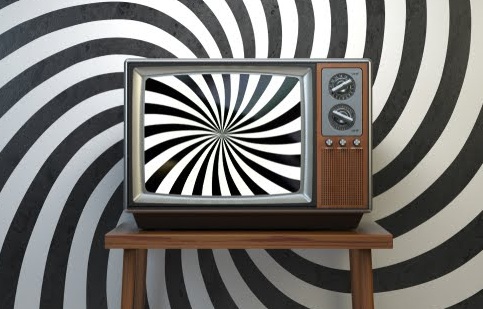 (Thanks, Adam Smith, for the Hypno TV image.)

Lately, the Peak Stupidity posts on TV have been related to one of my favorite shows from the 1970's, The Rockford Files. You will find 9 posts on that show under our TV, aka Gov't Media topic key, starting with Peak Rockford Files. Those are upbeat posts and not really applicable per that full topic key name. We were different then, and TV was different then. The trend had started though - they want you to keep that thing on and watch it incessantly.

It's been a while, but my annoyance at this incessant TV-watching stupidity keeps cropping up. Peak Stupidity last posted on TV Inanity in November of last year. We've had a few more post before on what I call "force-feeding of TV" here, here, and here. It's gym's, doctor's offices, store lobbies, airport terminals, and all over.

This one was not too bad in terms of personal annoyance, but ... let me explain. The middle one of the links above was about TV in the lobby of an auto shop. I had to wait a while for they guy to pull out my new car battery, and they didn't like it when I turned off the TV. This time, I had 4 new tires that I was just picking up (uninstalled), so it was a 5 minute wait for the customer ahead to pay*.

Ahhaaa, I saw the remote control for the TV up top at the front of the counter by chance. I wasn't sure this time if anyone was watching it, but I went for the power button. No go. (These things are complicated.) The shop guy came in and exclaimed "That's the TV remote." "I know, I was gonna turn it off." A customer who seemed to have his shit together, appearance-wise, was just dumbfounded, as was the black shop guy. "I was watching", the customer told me. "OK, I couldn't tell."

It's not the TV itself this time, but the reaction that's got me wondering about people. See, they were both looking at me and each other like I was some kind of nutcase. I wanted to ... GASP!... turn off the idiot plate! OMG! It's always on. What would we do, you lunatic?!

That previous time had a really funny ending, because, after it DID go off, because TVs are computers like about everything else, the guys were having a hard time getting it going again. (I left during this fun, haha!) This time, they are disgusted with me, and I'm disgusted with them.


PS: Really, the black shop guy seemed cool otherwise. When I unloaded the old tires (on the rims) earlier in the day, I asked him "hey, can you bounce these like a basketball?" He knew I directed this at him specifically, cause, you know ... and he appreciated that. Then, after the TV thing, we talked old cars for a minute.

* Paying is just not so simple as it used to be though. Those time-saving computers make it take a lot longer.

You’re missing the really important part about modern TV… they contain both a camera and microphone that can be kidnapped and used by people you probably wouldn’t let visit your house.
Moderator
PS: Adam I agree with you and Alarmist that a real refugee would be scared to return home. All that just shows the BS in using the term "refugee".

Mr. Russell, I think it was Adam Smith who already alerted me to TV-B-Gone. I like your suggestion. It may be not as shocking (hence, fun to watch) as the power-off feature, but, you could get away with more. OTOH, as I wrote about the store I bought a car battery at a few years ago, turning the TV back on was no easy matter for the employees. Now, that I think about it, I saw that same thing happen at a hotel gym. (The hotel people there weren't as upset though - they just wanted it back on for the next guest to use the gym.)
Moderator
PS: Alarmist, the guy writing that "Didactic Mind" site is pretty one-side (pro-Russia), but I liked the stories from PommieBastardLande, haha.

"This is what happens when you play stupid games – you win stupid prizes. And the real tragedy lies in the fact that these stories result in broken homes that destroy the lives of young children, all because bleeding-heart types can’t keep it in their pants long enough to send the refugees packing back home."

At one time there was a device known as TV-B-Gone. It was a little fob you could hang on your keychain, and it was like every TV remote rolled into one, except that it only had one function: power off. So you go into a place, there's a TV blaring, and you surreptitiously point your gadget at the TV, push the button, and it goes off.

I wrote the maker and said I appreciated the sentiment, but turning it off is too obvious. Too many people will notice, and demand that it be turned back on. (Like your African-American customer service specialist acquaintance.) What we need is TV-B-Quiet, which will just turn the volume down to the point where people can hear themselves think, but maybe no one will immediately notice that someone has sullied the electronic god and demand its restoration to it's rightful place of dominance. It's not possible to kill TV, but maybe you can make it so that it doesn't take over the space.

They thanked me for my input.
Adam Smith
PS: Thanks for the info and the links, Mr. Alarmist,

It would seem to me that a real refugee would not want to vacation in the land they fled.
Can't believe so many (formerly) western countries give welfare to invaders. Clown World is uhmazing!

I had to google Lysistrata Syndrome and Wonga. Never heard of them before. Misha and Masha seem nice. Thanks.

@Mr Smith, good evening ... the Swedes have found that 4 out of 5 “refugees”, many of whom receive welfare, take their holidays back in the countries they fled. There is little question the same is at play with the folks from 404.

The West is populated by sentimental saps. My wife hates it when I say it, but that is what we get for letting people best qualified to be HR cat-ladies assume real positions of power with control over the public fisc; but we Western men were dumb enough to go along with it. Must be the Lysistrata Syndrome.
The Alarmist
PS

Didacticmind.com sums up what I’ve observed in more than a few countries since the ‘War for 404’ broke out:

Chaps, do you remember that whole weird series of episodes of what we might call a White Trash Soap Opera, suitably titled Yorkshire Dales or some such, involving a father-of-two who took in a Ukrainian refugee and then ended up dumping his not-wife’s ass in favour of someone younger and tighter?

Well, it turns out that there has been quite a lot of this sort of thing going on of late.”

If you look at the gal who landed the former head of Wonga, you’ll realise they don’t have to be all that hot. I’ve always wondered what made King Eddie the 8th give up the throne for awallis Simpson, or how Carrie hornswaggled BoJo out of his last marriage ... must be something in the English water.

Adam Smith
PS: Thanks for the info, Dieter,

I had no idea that Germany was paying welfare to Ukrainian refugees...

"The only one who should be in France, though, is the young lady Alina. I picture her as being hot, that's all..."

Maybe without the face diaper(?)...

☮
Dieter Kief
PS
Now it dawns on me: This French example clearly shows: - No Russian didn't do nut'n! - Ukrianians are the aggressors. and paranoid.
No Ukrainian two streets away btw. without a SUV. All well off & fit men - mostly around 40.
No bus-seats availeble from Kiev to Munich and back well into 2023...What does that mean? _ One theory says, that Ukrainians are only for a few days in Germany to make sure they get their refugee-checks - then they return...
Dicsos are full in Kiev. Drugs cheap and aplenty...
Moderator
PS: "I thought they were Russians - they sounded and looked like Russians!". "We thought he was a Russian - he sure sounded like one and looked like one!". (Not actual quotes, but the gist of it.)

Maybe they are not so much different. The only one who should be in France, though, is the young lady Alina. I picture her as being hot, that's all...
Dieter Kief
PS

Alarmist - the beach story from southern France is indeed fun.
So: The two Ukrainian women were mistakenly beat up by a Ukrainian guy for being Russian, while they thought the attacker was an evil Russian (he had to be!) bloke and therefore feared for their lives....as they told the French beach-patrol?! - Ahh, c'est très Saint-Tropez ca! - My heart is beating quite happily...

“Ukrainian women assaulted by compatriot who mistook them for Russians The attacker, who was initially believed to be Russian, turned out to be a former Ukrainian soldier.”

Just wait ‘til you finally get the vaxx and they can pump their programming directly into you brain via 5-G.
Dieter Kief
PS
Mr. MBlanc46 - same here. Actually I carry a copy with travel writing by German pioneer psychologist and mythologist (founder and editor of the first psychological review: Journal of the Experience Based Knowledge About Psychology - Magazin der Erfahrungsseelenkunde, 1783 - 1793) Karl Philipp Moritz and collection of poems by Wislawa Szymborska.
MBlanc46
PS I always have a book with me, in case I get stuck waiting somewhere. “Don’t leave home without one” is my motto.
Dieter Kief
PS
People have gotten used to those screens.

I - - - 'xcuse me - there is a great novel about a married couple in Bonn ca. 2000 and the narrator, a literary studies  professor, loses his wife to the TV and to videos. Slowly but steadily. Great novel by an insightful German novelist - Stefan Thome - title: Centrifugal Powers (Fliehkräfte). The novel ends well, btw.

There is another great novel, Eckhard Henscheid's The Bishop's Paramour (Die Mätresse des Bischofs) - in which the narrator, Sigmund Eralp Landsherr (Sigmund (refers to german(ic) knights), Eralp (Alpine of Honor) Landsherr (= lower noble man) is often times talking about his wife and the recurring subject is: They don't talk to one another any more. And the wife, which he says is his "Turkish wife" (she is not Turkish, but behaves as if she were...) - is constantly watching TV and not doing much else - one thing she doesn't do is: She doesn't talk anymore. She lives with her mother in law, who suffers from Alzheimer's disease (ehh - no, the novel is not the least bit tragic. It is comical - and fun to read - easily amongst the best five written in german after 1945.
Moderator
PS: Yeah, that TV picture ought to be on the top - I'll change it out sometime.

The name Ken Starr brought back memories, Adam. How'd he get away with a natural death?
Adam Smith
PS: Good evening, Mr. Moderator and Friends,