Justin Trudeau, looking like a certain full-on Communist, rather than a Semi-Fascist: 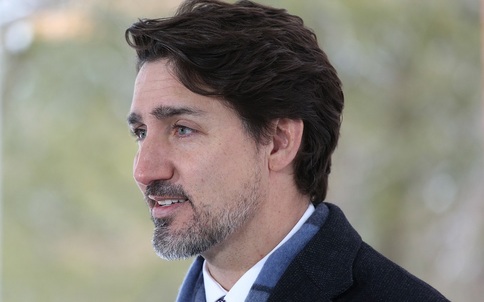 In an Unz Review comment thread a few days back, Adam Smith reminded me with a tweet screen-shot of the truckers' revolt of early this year. I have not been able to find anything more recent than 3 to 6 months old on the aftermath - that being the modern internet along with search-engine censor-foo. I had really though that the People's Revolt of '22 would become an important part of history*.

Alas, it seems that 2 things, the people of the West being purposefully distracted by the Ukraine/Russia war in the Spring and the slow walk-back of Kung Flu vaccine mandates and restrictions, have dampened any such serious revolt against the Globalists, for now.

Since then, the Trudeau-led Canadian Government and its national police arm, the RCMP, have tried to persecute those truckers for their (actually) peaceful protest in Ottawa last winter. The Totalitarian above is just doing what Globalist Totalitarians are trained to do - he even took classes on this in Europe.

Back down in the States, Zhou Bai Dien, too old to have attended those classes, recently called those of us not in line with the UniParty "Semi-Fascists". (That was not in his rant/speech of a couple of weeks back, It was from some talk of his to the Democrat National Committee.) As a Totalitarian, you really need a 48 foot trailer full of gall to tell a lie like that, that we freedom-loving people are the fascists or, what, half-way Fascists?

I'll tell you who's a Semi Fascist. That'd be Justin Trudeau, persecutor of the semi tractor-trailer driving good patriots of Canada. 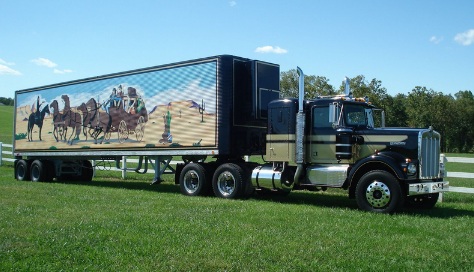 Do you recognize that one? Yeah, Peak Stupidity already featured two really good truck driver songs long ago - Lynyrd Skynyrd's Truck Drivin' Man and the Marshall Tucker Band's Twenty-Four Hours at a Time, both with the Southern Rock topic key too.

So, here's Jerry Reed, with the handle "the Snowman" from the 1977 movie Smokey and the Bandit with West Bound and Down, on the way from Atlanta to Texarkana. Westbound and down, 18 wheels-a-rollin'...

* We even put in the topic key for it. That turned out to be premature to say the least.

I'm pretty sure the Trudeau looking/sounding guy is a deepfake, though I suppose it could be Trudeau's non-evil twin.

☮
Moderator
PS: From that BB post (thanks, Alarmist): "Having once attended a school board meeting, Mrs. Coleman figures a raid on her home is only a matter of time. "I have started setting out cookies at night as well. I'm sure they'll be hungry after all their raiding!" said Mrs. Coleman. "It all started with liking this Facebook post about how schools needed to re-open during the COVID lockdowns. I wound up going to a school board meeting and next thing you know, there are three unmarked vans on my street and every guy on the block is wearing a Lacoste shirt and Ray-Bans. So, I'm trying to get the house all fixed up before they come in."

"Commandante Justin channeling his inner Commande Castro in that pic there."

Your moment of timely Zen from the Bee ...

☮
Moderator
PS: I didn't know it was that many, 700, political prisoners from 1/6/21, Alarmist. That's disgusting. If there were a real news channel out there, it ought to have the number of days they've been held at the end of the newscast, as was the case with the under 10% of that number held by Iranians in 1979-'81.

Maybe it'll take some real bigshots being taken before we hear and alarm.
The Alarmist
PS

Commandante Justin channeling his inner Commande Castro in that pic there.

I read somewhere that Uncle Joe’s secret state police raided a number Trump associates homes yesterday. I don’t know if they frog-marched any to the DC gulag to join the other 700 Jan 6 political prisoners being held without bail before trial, but it is only a matter of time before even the elite of the right get that treatment.