(Continued from Part 1, though this post could be entitled The lies of Anthony Fauci.)


Again, this is a "file photo", not a picture of Dr. Cockey. 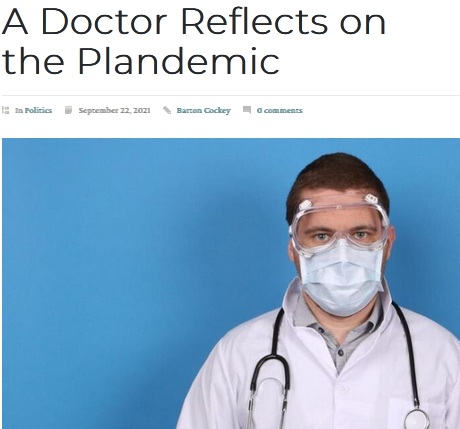 I'll keep it pretty quick here in going over more of the excellent summary of the Kung Flu PanicFest for laymen by medical doctor Barton Cockey, as published on VDare -
Hey Biden! The Real “Fascists” Are The DIE–Big Pharma Alliance Behind The COVID Coup—Not Bumbling GOP. Dr. Cockey has a lot to say about top Covid advisor (that's all his position was - nobody HAD to listen to the asshole) Anthony Fauci. None of it is in admiration of the guy.

The public face of Official Science during the COVID crisis was Dr. Anthony Fauci, head of the National Institute for Allergy and Infectious Diseases [NIAID] for 42 years, with an instinct for self-aggrandizement. Robert F. Kennedy, Jr. has summarized the dodgy doctor in his book* The Real Anthony Fauci, which I strongly recommend for its analysis of the deep institutional corruption of the medical-military-industrial complex. The final chapter even lifts the lid on the link between “vaccine development” and the bioweapons industry, with a summary of two decades of globalist “biosecurity” exercises that served as the template for the program of medical Totalitarianism under which we now live.

The latter bit, BTW, would interest that Unz Review proprietor that we mention occasionally on Peak Stupidity. Yes, the stuff was made in a lab, it sure seems, but, contrary to Ron Unz's opinion, my common sense tells me that it wasn't Americans who initially released the thing. See the latest we wrote on that in I Stand with North Korea.

Anyway, Dr. Cockey continues by mentioning that Fauci has been facing some questions in the US Senate, with more to come. (Dr. Cockey thinks Fauci is right to say he is not fazed by this, as the GOP will be worthless.) Responding to Senator Josh Hawley in some of these proceedings, a Molecular Biologist named Richard Elbright noted that Fauci told America quite a few lies. Per Barton Cockey:

What are those lies?

* Covid-19 is so deadly that we must shut down the country.
* Masks and social distancing stop the spread.
* Remdesivir is safe and effective.
* mRNA shots are vaccines.
* mRNA “vaccines” are safe and effective.
* The “vaccines” prevent infection and transmission.
* Vaccine Adverse Event Reporting System (VAERS) data showing tens of thousands of deaths and hundreds of thousands of serious injuries are meaningless.
* Everyone, including children, must be jabbed.
* Pfizer’s new antiviral pill is effective, but the “vaccines” are still necessary.
* Hydroxychloroquine is ineffective and cardiotoxic at therapeutic dosages.
* Ivermectin is “horse medicine.”

Regarding VAERS, I DO think the system is meaningless, but not in the way Fauci might see it. I know that it's not so easy to get a case into that system on one's own, without doctor cooperation. That Kung Flu Kash would provide a lot of disincentive, on both the doctor and family end of things. I'd guess the VAERS numbers are MUCH lower than reality.

Well, that's a lot of lies on important healthcare issues. Americans should have ignored the guy after the 1st lie came to light. Nope, but the TV guy said ...


* Just today, at the public library, we saw a kids' book (say, for 10 y/o's) about Anthony Fauci in a series of books about "heroes". Unbelievable!

Alarmist - that's right.
And I want to add, that I was in the lake quite often this (fabulous!) summer. And I never ever saw that happen. Not once.
Plus. There is somehting about this photograph, that makes
me laugh - even tinking about it gives me a smile. - It must have to do with the symmetry in it. And with the facial expression of the swimming lady. How she presents her oderly masked head above the water (there could be something to worry about in the water too....).

Another laugh today about a GB post: Now the Bristish wanna make a man the Queen!? - This LGBTQ stuff is going to far!

About DeSantis catching up with Trump's phantastic shwomanship skills: Mod., there are more sexes than you might think of if you look at your blog, the commenters - and nowhere else.
I'd say Trump got that - and DeSantis seems to get it too.
The Alarmist
PS

Yes, I was the American.

The joke is that the swimmer was wearing a mask. In the past, the joke would have been that the German was wearing black socks with his sandals.
Moderator
PS: Mr. Blanc, that is how I get miffed about Ron Unz's claims. He used that Nicholas Wade article as supporting evidence for his theory. I took the hour or 2 it took to read it and saw that it most certainly did NOT support Mr. Unz's theory. (It did only in that it maintained that the virus did not simply mutate from a benign one to a hazardous one without purposeful work by humans.)

Mr. Smith, I think the Globalist scum have USED the outbreak to gain and show control over the population. (I remember most of the incidents you mentioned and wrote a post about the Spanish surfer, with a Beach Boy's theme:

I am not so sure that the virus was intentionally released. It seemed too benign, but then if you have the power to gin up a PanicFest as they did, I suppose it doesn't matter so much how deadly the virus is, as far at the Totalitarianism and ringing up of a big bill.

The "gain of function" work was being done with info. about it right out in the open. I still wonder what the point of that was. Maybe they were working on something more deadly, and the release of the Covid-19 was a mistake? I don't know though.

1000 Years, I like your attitude. Thanks for writing in.
Moderator
PS: Right, Dieter - DeSantis does sound more like a showman in the video than in any other I've seen of him. I didn't like the tone that much - I'd rather see him more manly and serious - but if that's what it takes... I gotta say that I did not get the German swimming by joke one bit, sorry. Something got lost in translation or in the waves?

Alarmist, do you mean that American was you? "But, he's right!" is that correct. Thanks for the report - I don't think I'd run into that kind of reaction in my part of the US, even on a hospital elevator, though I believe you'd be officially required to wear a mask.

Moderator
PS: "The global Criminal Elite see themselves as demigods who are entitled to all the resources of the world."

In the past, they knew they needed a whole lot of labor still. Now, they think they don't, but will the automated world really run for them for long? It may be like one of those science fiction stories in which aliens come to earth and wonder who created all these machines that are willy-nilly doing this and that for no purpose. Of course, that doesn't help our cause .. unless we go hide out ... under the sea! [/Homer]
Adam Smith
PS: Good evening, everyone,

I think the criminals masquerading as "government" released this bioweapon as a way to cover their planned implosion of the ponzi scheme economy, and for other purposes. Couldn't place the blame on the greed and excessive risk-taking by global financial institutions like they did in 2008. This time they needed a different reason to conjure a new $8 Trillion in debt out of the ether and on to the backs of the current and future tax cattle. It was also a great excuse to try some serious police state totalitarianism on the various populations of the world.

Remember when "government" workers in hazmat suits in Spain arrested a woman for surfing...
https://nypost.com/2020/09/08/surfing-lifeguard-with-covid-19-arrested-for-not-quarantining/

Remember when Hayley Hodgson and other Australians were being locked up in a concentration camp in Howard Springs...
https://www.youtube.com/watch?v=mGFdWcJU7-0

Remember how many people supported and cheered on this insanity?

God save the King 'cause He's the King and He needs saving...

☮
1000 Years To Flatten The Curve
PS The Big Pharm biomedical police state Chiquitastan is the golden Fundamental Transformation workers utopia and after Dark Brandon lasers the water pipes in that racist hellhole Jackson, we are going to conquer the world!
With masks on to be safe, of course.
Forward! Yes we can.
MBlanc46
PS Some time ago (spring 2021 maybe?) science writer Nicholas Wade published an article spelling out the case for it escaping from the Wuhan lab. Not a certainty, but definitely a suspect.
The Alarmist
PS

I wandered around Germany today, and there were plenty of masked people to be seen, but the funniest point was where I and an unmasked older German crowded into an elevator of masked people who were trying to shut the elevator in our faces, so he barks at them (auf deutsch), “you weren’t going to let us in!” They objected that it was not true but the look of terroron their faces gave them away, so the American chimed in, “Doch, er hat recht!”

On my stretch of beach in Florida there is at least one German, sometimes two or even several, who become shark food. Funny, nicht war?
Dieter Kief
PS
Great photo! - Funny indeed.


This one is great too - translation of the German text: Lying at the beach thinking of nothing special - and all of a sudden, a German is swimming by

Ivor Cummins is on a roll. He just tweted this one about ron DeSantis about Covid and California and stuff:

Note ca. thirty seconds in how Ron DeSantis channels the Donald - from "It's ridiculous on" - - - Great that he learns this stuff (ther's no one better with this kind of on the fly remarks that hit the red hot center of the affair at stake than the Donald Presidente - he is a great performer).
Dieter Kief
PS

The world is a continuum of miracles & wonders (to put this one very mildly).
The Alarmist
PS

Ask yourself why Kary Mullis, inventor of the PCR test, who always maintained it was not suitable to be used alone as a diagnostic test, and who had for years been a detractor of Dr. Fauci just happened to die a few months before COVID and mass PCR testing became a thing.

They want us to die.

The global Criminal Elite see themselves as demigods who are entitled to all the resources of the world. In the past we were the customers and clients who made them rich, but having attained great wealth, they had the great epiphany that were were competitors for the finite resources of the Earth. This is why they want us to die.