Too sad to say I told you so.

We could have told the Western Europeans things 30 years ago, but the decent Dutch, German, English friends I knew were mostly the type who would have told me that my country is racist, if I had tried to explain...

Starting the week on a sad note here, here are 2 pictures of the recently raped and murdered young Austrian teen whose horrible story commenter Adam Smith pointed out in this "Paul Kersey"* comment thread. The rapist/murderers were young Afghan "refugees" to Austria.


Leonie, with her pets, gone from this world now: 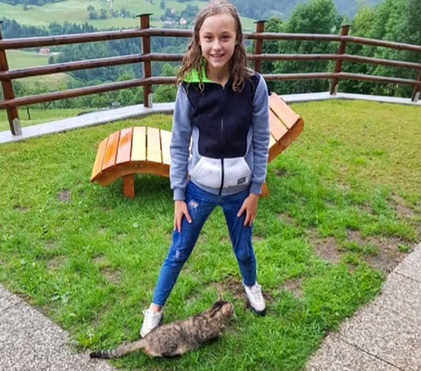 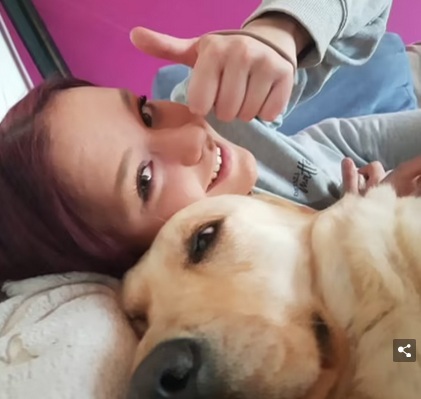 A little bit about Paul Kersey's blog first: His posts, besides the craziness of the really long-assed headlines (I think he's gotten better on this as of late) often get repetitive. It's the same style story of a few types of dysfunctional and violent black behavior - poorly-run cities, the asking for free stuff from White people to (never actually) solve their problems, the marches against violence in which shootings occur, the nostalgia for the highly-functioning White American society of yesteryear, blackety-black blanketing coverage in advertisements and entertainment**, and few more themes, over and over. There IS a point to that though. Mr. Kersey shows us how pervasive this all is, and that it's not going to end well, unless we do something much different than we've been.

I've read Mr. Kersey mention this a couple of times before, but in this post too, he started off with the 10 y/o reason for his starting his blog - Stuff Black People Don't Like***, which was the murder of his friend, a young woman, by some black thug in Atlanta.

The Kersey post is about yet another (fairly) young lady who pretty obviously didn't understand or ignored the danger, in this case, of acting like one can jog around in places like Memphis, Tennessee at 4:30 AM, as if it were, perhaps Memphis, in 1955. However, as with Mr. Kersey's posts that almost always deal with these problems in America, our racial problem since at least the beginning of forced integration is politically complicated. (Some would argue it has been since the early 1800s.)

Mr. Smith's linked-to article, however, is about Austria. Austria never had black slavery. They didn't have black people or any big minority of non-White foreigners, as a rule, as why WOULD a European country have any non-negligible amount of either? What would the point be?

Well, the Globalist nation-destroyers may very well have a good point of their own on this. It looks like the people of Austria, as with all of Western Europe, were just too stupid and/or shit-holier-than-thou, though, to resist this immigration stupidity that's been accelerating over the last couple of decades. As Peak Stupidity wrote long ago, I guess Europeans visiting here might now understand a little better what America has been going through and forego the name-calling. This is not the sort of thing you should learn the hard way. I could say "It told you so!", but the stories are too sad to warrant that.

Here's a part of the article Mr. Smith linked to from the UK Daily Mail****:

A suspect, who allegedy boasted with pals about gang-raping a 13-year-old Austrian schoolgirl who died in the attack, has been arrested.

The teenager's lifeless body was dumped beside a road next to a tree after allegedly being raped by the four men.

Austrian police say all four were immigrants from Afghanistan and arrested three, with an international manhunt carried out searching for the fourth. The suspect has now been arrested in London.

Schoolgirl Leonie, 13, from the city of Wiener Neustadt near Austria's capital Vienna, was reported missing by her parents Melanie P, 40, and Hannes W, 39.

Three days later, on June 26 in the morning, she was found dead on a road verge with her body leaned up against a tree.

Austrian Police arrested two Afghan immigrants in June and a third one at the beginning of July, after they allegedly boasted about having wild sex with the child.

They have now captured a fourth one in the city of London on Thursday.

An 18-year-old was the first one to be caught by the police and was arrested while he was eating pizza in a local Italian restaurant on June 28.

What would you do as one of the parents? The tweet that Mr. Smith embedded under the Paul Kersey post said to share this, so this is Peak Stupidity's old-fashioned way, a rant. Why would you invite this sort of thing to your country, as in, your home? This didn't need to happen - that's not the heinous crime I mean, but that Austrians are prone to experiencing this now did NOT need to happen!


* Paul Kersey is the pen name of this former and maybe current, Atlanta, Georgia resident who writes the most honestly and courageously of anyone I've read on race. "Paul Kersey" is the movie name of the main character - played by Charles Bronson in the Death Wish series of movies. (That link goes to the first movie - there are either 4 or 5.)

** His posts about the black people in comic-book movie roles are the only ones I could completely do without. Who needs that stuff, White or black?

*** That was a play on the title of a less-serious site called Stuff White People Like. It's still up here, but the guy hasn't written a post in 12 years. I thought I was bad this long weekend!

**** I gotta say, this Daily Mail story is downright confusing in parts, because it jumps around - in pictures with captions vs. the text - from the story of Leonie and the story of a 16 y/o Austrian girl who was also raped and murdered. This is no one-off story.

It occurred to me some time ago why our Criminal Elite are desperate to get so many third-world denizens into the first world is to create conditions where ordinary citizens are too occupied fighting off the imported predators to adequately address the real problem, which is the Criminal Elite. Now, as they plunge us into a cold, dark, hungry winter, this seems very close to the truth.

But I also prophesied that these conditions tend to create right-wing death squads who dispense citizen defense and justice in ways the elites refuse to. Perhaps this is why the Criminal Elite are doubling down on migrant settlement.

Have you seen the daily pictures of boatloads of military-aged males being ferried into the UK? They are hitting all-time daily illegal migrant entries in the past several months.

It is not better on the Continent. The Dutch government wants to take out as many small farmers as possible, ostensibly to reduce nitrogen runoff, but with a not so secret purpose of having room to build ghettos to house the massive influx of migrants. The Dutch and actual Europeans in Netherlands are still 74% of the population, so they might still see the light this winter ... then again, Dutch people are a delightful combination of Compliant Dunning-Kruger exemplars. Germans are not much better in terms of their own survival. As noted by Dieter, it must be war guilt.
Dieter Kief
PS
Most people in Germany/ Northern Europe react in such cases as follows: Sad - but nothing special really; statistically almost a no-occurence. Part of the human experience.

In the back of their heads they think: We have to compare such rare instances with the wars we inflicted on the whole world - and be greatful for the by and large perfect lives we all have.
A more elaboratred version of this mentality mentions, that most refugees are traumatised - not least by our wars - and therefore prone to agressive behavior. They thus need therapeutic help. And let's face it: That can be achieved much more easily here than where they come from.
It's a general softheadedness. Think of the Beach Boys - or Elvis Presley's In the Ghetto.
Moderator
PS: Thanks for adding all the "immigration" details of this story, Adam. The Daily Mail article was giving me lots of trouble (I know - Brave Browser) so I didn't take the time to catch any of these details, if they were on the page. I will check out some of the other articles.
Adam Smith
PS: Good evening, Mr. Moderator,

I hope you and your family had a nice long weekend.

Like you, I shared the tweet because whoever posted it asked. I had just finished reading Kersey's Eliza Fletcher article and it seemed like as good a place as any to share a heartbreaking story like this. (Kinda matches his theme.) I feel bad for her parents.

"Rasuili Zubaidullah, 22, entered the UK on a boat of refugees and claimed asylum using a fake name, only weeks after the girl was found dead in Vienna."

Within hours of the grim discovery, Zubaidullah had fled - managing to dodge Austrian police and a Europe-wide manhunt, it is claimed.

The Afghan refugee later arrived in Dunkirk, northern France, where he managed to board a trafficker’s boat and arrive in the UK.

Upon arrival, he is accused of giving British authorities a false name and was placed in the Ibis hotel in Whitechapel, east London, which is being used to house migrants at the taxpayers’ expense."

Clearly, these people have different values than we do. I mean, seriously, who does this? These animals do not belong in our (formerly) nice white countries. I blame the criminals masquerading as "government" for her death.

This never should have happened. I see only one way to solve this problem. I wish there were another, less ugly, way.