Battle of the International Weather Girls

"In this corner, straight from the TV in the Hampton Inn lobby ..." 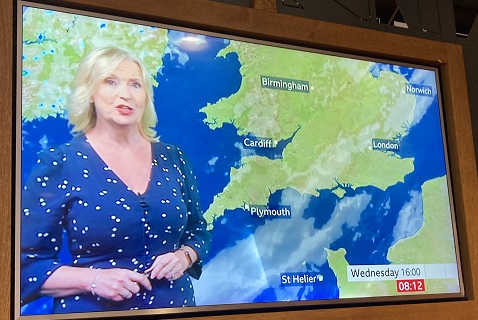 
Before we get into the more serious posts from the UK, Peak Stupidity will present this example of the current state of affairs on English TV. As is the case in general, we watched almost no TV on this trip (we didn't touch the TVs in any hotel rooms), but my son was looking for baseball on the TV in the lobby. I hated to tell him, but there wouldn't be baseball - maybe cricket. We didn't see any of that even.

The next morning, as we went by the big TV to get breakfast, I snapped a shot of this English weather lady. Yes, I had this post in mind already. It's the same feminist or now woke policies that are meant to take the fun out of life and have us understand that we are all the same. We should be happy to find out the high temperatures and cloud cover from this fairly dumpy broad on the TV.

Well, yeah, I don't know who she is*. She may have a PhD in meteorology for all I know and be a very nice person off the TV. Still, one can get forecasts on the phone or internet elsewhere, nobody really can predict much farther out than 4 days in most locales, so could they not give us a little eye candy? No, they most certainly will not! This is woke Oceania we're talking about, formerly Great Britain. You will watch this lady and like it! (Oh, and you'll pay a tax tax to even HAVE your TV!

It's been over 23 years since I was hooked up to TV. Going back to the mid-1990s, I remember a time when I'd watch the local news followed by Andy Griffith each weekday evening. One local channel had a local guy doing the weather who was kind of a celebrity for the kids, but the others had fairly pretty women on doing it. They smiled and had nice pretty dresses. They didn't wear bikinis though.

Now, there's youtube! No, I don't honestly care if it floods in La Serena and gets up to 45 Celsius in Valparaiso. That doesn't change the shape of this weather girl's shapely T's and A one bit. 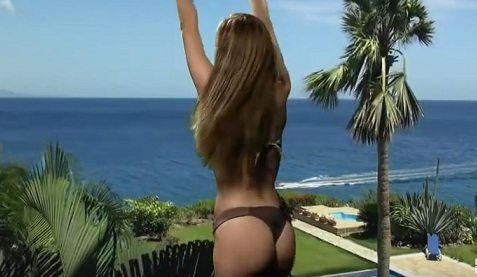 I know that the Globohomo wokeness is infiltrating a lot of countries, but I can't see the Latin Americans really embracing it. Long live Flavia and her younger replacements! As for the old 1990s pretty weather girls. That was a happy medium ... OK, there was no youtube.

OK, you're gonna want at least one video, and if you search for "Flavia" on youtube you'll find other weather reports from Chile in 2013. Sure, you're just doing research for your Climate Crisis™ presentation for work, if your wife asks, yeah, that's the ticket ...

In this last round of Battle of the International Weather Girls, it's Flavia by a nipple!

(I think she'd be even hotter directing traffic in downtown PyongYang under a big blue umbrella. Don't you?)

* I don't know if this was ITV or BBC or what, for that matter.

And thanks for bringing up Eva Vlaardingerbroek. I first noticed her a few weeks back with the Dutch Farmers Protest.

Here are a few more pictures...

I hope you have a great rest of the weekend, Mr. Alarmist!

One of the Brit channels had a cute weatherbabe who was missing most of an arm. Kind of distracted from the important characteristics, and made it hard to point (Q: What do you call a dog with no legs? A: Doesn’t matter, he can’t come).

If you are in the UK on Fridays, you can catch a show on Channel 4 at 10pm called The Last Leg, with a host who has a prosthetic leg and a couple of physically-challenged guest hosts. Once you get past the angry liberal attitude, it can be charmingly entertaining.

@Mr Smith, my wife and I jokingly refer to the very pretty blonde engineer female that SpaceX uses to moderate some of their launches as Booster Barbie. Lately they’ve had an Asian chap, who I call Countdown Ken. Booster Barbie is quite good at what she does, so it is in no way a term of disparagement.

Speaking of TV babes, Mark Steyn manages to have several telegenic and bright babes on his GB News gig during the week. Here is one Dutch gal named Eva Vlaardingerbroek.

Not a great shot, but I wanted to highlight the strategic positioning à la Fox News to showcase the legs.

Moderator
PS: Man, time flies, Mr. Hail! I remember thinking that there's too much on the internet for me to sort through on this Georgia Guidestones story - it'd be easier to go visit the town of Elberton again. I just might. Time to ask some questions to real people in real life. I can't say when that would be though.
Moderator
PS: I'm glad I could help, Dieter. That Booster Shot Barbie from Mr. Smith cracked me up just now.

Alarmist, I know you introduced us to Miss Almeida before. Your English "meteorologist" is in the middle - like the local weather girls I'd see back in the day. (The men on there would try to be funny to make up for lack of T & A.)

Mr. Bergeron, I saw that movie long ago, so I should remember some chesty weather girl - will have to look it up though. Yeah, I was about to write a post about that deal with the British guy getting arrested for sharing a meme with pride flags arranged into a swastika. Was that the one? I'm glad we didn't run into any trouble - seems easy to get into in that true-to-life Oceania.
Adam Smith
PS: Off topic,

Some Booster-Shot Barbies even come with Bell’s palsy!

On the topic of Peak Stupidity posting plans, just wondeeing.

"I'll have more on the Guidestones if I spend some more time on the subject, and then plenty of random stupidity will crop up." (end quote).

A lot has been going on in your world three weeks since then. Peak Stupidity posting was reduced to an unusual lull for a long while. If there was any steam left in the Guidestones discusson-engine, it got bumped back. Now that you have spent a week in that distant country which produced the evil Dr Neil Ferguson (the "millions upon MILLIONS of deaths!!" cool-models-n-charts guy of 2020), there is a lot more fat to cbe chewed upon these pages, no doubt.

Any thought of returning to the topic of the Guidestones? I hope so. I for some reason feel it's more important than it seems at first glance.

And I note we have just passed the one-month mark of the bombing and demolition.
Adam Smith
PS: Good afternoon,

☮
Harrison Bergeron
PS Weather girls are a construct of the white male patriarchy.
Natural Born Killers has the best take with the chesty fake news anchor girl and some countries have semi-nude versions.
The AM traffic girl is dreamy, a transplant from the glorious peoples republic of Commierado. (CO)
Baseball is also a construct of the white male patriarchy and thank you ancestors for getting the hell out of the UK where you can be arrested for sharing a meme.
The Alarmist
PS

If it is going to be an English weather woman, my vote is for Laura Tobin...

But my heart remains with Susy Almeida ...

Mod, I laughed out loud for the first time today! Thanks.***
(Thanks for not touching TVs too! - A real difference.)

***your weather-mum shall I say: explanation - or: analysis? I don't want to decide. In any case: Hilarious! Great fun!