I want YOU for the PS Army! 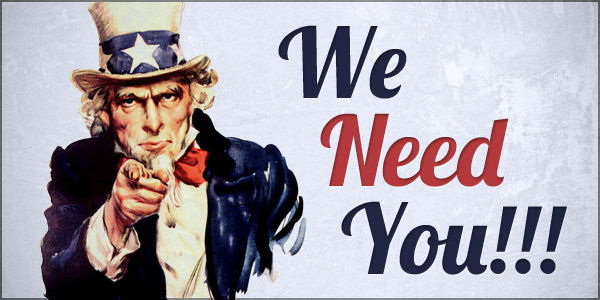 In a post titled Military Enlistment Way Down of a few days back, Steve Sailer wrote about the new woke military that serves the Potomac Regime, there was good discussion on why any patriotic White man would want to serve. "Serve whom?" is the question.*

Still, plenty of White men sign up. Some of these guys are not just in it due to a lack of other employment and the benefits. There are many who take pride in their putting their lives on the line for (purportedly) their country. Since they have the courage to join up on their own when there might come a time they are under fire, and courage when under fire even, I wonder why they don't show a different kind of courage in other areas back home. I'm writing of fighting the wokeness of the American Establishment instead.

There's a Culture War being waged. On our side, instead of risking being fired at, in the Big-Biz world one only risks being fired. That shouldn't take as much courage, should it?

Maybe young White men aren't taking the Culture War as seriously as they take fighting some poor Moslem bastards over in the Middle East "for Democracy". Are they too polite? In which war do you personally have more to lose, and in which war does America have more to lose? It seems a no-brainer deciding to fight the woke Institutions here rather than risking getting a leg blown off fighting for the Potomac Regime.

Yeah, you might get canned. You might not. As Peak Stupidity has often noted, "there is great power in numbers". Even if you don't have the numbers, why not fight? These are the battles we need you for.

If you're a big shot in the corporate world, sure, you may put up with SOME of the diversity training BS, a stupid memo from HR every other day, etc. (I put up with a very small amount, but luckily, I'm not really in the corporate world. I've also taken a stand on some of it.) However, if you're a young White man working at McDonalds, and they've got an anti-White diversity training session spot set up for you, how about you just say no? The way the service industry needs people now, I don't know what they'll do. Even if they fire you, you've shown courage and done more to help America than anything your could possibly do as a soldier in today's American military.

Even though it was not quite the same scenario he described, I liked this anecdotal comment by Unz Review commenter JR Ewing (handle taken from the old Dallas TV show) enough to post it in its entirety here:

I quit my last corporate job about 15 years ago. Have since been 100x more successful working for myself than I ever would have been working for someone else.

Nonetheless, before I quit, I dodged mandatory “diversity training” for an entire year. At least 6-8 times by my count. Kept signing up and then coming up with excuses not to go at the last minute. (And truthfully, the excuses were legit – my time was much more valuable and important than sitting in a classroom doing bullshit indoctrination stuff)

By the time I finally resigned to pursue other opportunities, the training situation had progressed to “possible discipline up to and including termination”. Despite all the money I made them and everything else I accomplished at that company, I still consider avoiding that “training” to be my greatest accomplishment during my time there.

This was a small thing, but it's great that Mr. Ewing recognized it as an accomplishment.

We've been losing about every battle in the Culture War. America needs some real warriors to fight for it, rather than for the Potomac Regime. Join up, and recruit more!

It's been a slow blog week here, with other stuff going on in life. Thank you for reading our meager postings this week and our apologies are due for the extreme brain fart in the Angelou quarter post. See you here on Monday.

* See Death from Above, Assasinations, and Declaration of War, Arrogance from the American Military, and Outside it's America, for starters.

Dieter Kief
PS
Take my Christopher Rufo links as a form of seft-reflection, Mod.
I agree though: It is interesting, what he single-handedly managed to achieve - and I found it also very interesting, that Christopher Rufo seems to have a superpower. Namely to overcome the quite poisonous and destructive narcissism of the small differences. - That's a way to look at my long Unz-list: It shows how Rufo appeals to different kinds of people, which I think is quite soemhting. - Btw. the City Journal is interesting too in this (rather bright'n'nice) hindsight.
The Alarmist
PS

There's a certain mental hygiene to having what The Street calls "F*** You Money," but you can find more than a few post-woke companies in tech nowadays. I've read about several that have bought out or fired their problem-children in the past year.
Hail
PS

A Tuskegee Airmen quarter was released last year. Planned for under the admin of Dernald J. Blompf and his first officer Jared Shalom Kushner.

A grimacing black face looks up at two airplanes. A slogan: "They fought in two wars."

There is no plan for any 25-cent piece or any other coin to honor or commemorate White pilots.
Moderator
PS: Thanks for the unz.com search, Mr. Kief. That'd be about 3 hours of comment reading, which I find enjoyable, but others seem to think I should be spending my time more wisely, haha. About the only writer there that I don't like SO much is Ilana Mercer - she's good ideology wise, but I think pretty naive sometimes.

There you go, Mr. Smith. There's too much of that.

I do get your point about the evil of the HR ladies,, Peter. It's not that I haven't thought of that. However, some industries need people badly right now - you may get away with more than you think. Again, it helps to be part of a crowd. Can we ever get organized? I don't know...

Thanks for the comment, Mr. Cracka.
Creepy Azz Cracka
PS The replacements can go and fight in Russia to make the world safe for the rainbow bathhouse.
Maybe bundle an EBT card with a green card or a gas card from Jo Jo Brandon for the Zil Trabant from historic transportation secretary Petey Buttplug.
Since ol' whitey is not welcome, I hope the 1000 years of glorious faculty lounge victories works out for them.
Serving the PS Army is an honor and a privilege.
Serve the Yenan Way sold out quisling Grand Old Politburo?
Survey says...wrong answer.
PeterIke
PS

You're missing a pernicious aspect of what can happen. You might not just lose you job. You might be blackballed from your entire industry.

I work in the very woke tech industry. If I "came out" with unacceptable opinions, especially on LGBT or race stuff, I would not only be fired. When I tried for a job at the next company (normally I could very easily score a new job), they would call the previous one for a basic check of "did he work there?" They would surely be told by the grimacing HR lady that "oh yes, he worked here and was fired for saying men can't get pregnant on the company Slack!"

Then woops, that "we're extending you an offer" message would be rescinded. No job, sorry. And so it would go. Effectively, I would be fired from ALL future jobs, not just my current job.

People understand this, and it's part of the reason many are so afraid to speak out.
Adam Smith
PS: Good afternoon, Gentlemen,

"Serve whom?" is the question.
https://i.ibb.co/tqZRvJZ/Join-The-US-Army.jpg

Thanks for the links, Dieter.
Happy Sunday!

Thank goodness I’m enough of a rainmaker to skip all the woke crap sessions if I so desire, but I do join the environmental sustainability sessions just to shit on their magic thinking.
Dieter Kief
PS
Hey, Mod. here's more of this Christopher Rufo stuff - all published by the Unz Review

Excellence Over Equality
GREGORY HOOD • JULY 22, 2022 • 3,800 WORDS • 9 COMMENTS • REPLY
... a moral crime. What Christopher Hitchens used to say about...make weak arguments. For example, Christopher Rufo is an effective activist against... the critical point. Mr. Rufo says this: An equity-based... their rhetorical purposes. Mr. Rufo is also wrong if he...
Red vs. Expert? Three and A Half Case Studies from Soviet America

PAUL KERSEY • MAY 27, 2021 • 700 WORDS • 85 COMMENTS • REPLY
..., according to City Journal’s Christopher Rufo. The firm works to help..., can’t jump,” according to Rufo. The diversity trainers posed the... of taxpayer dollars every year,” Rufo said in a tweet thread...
Ethnocidal ‘Critical Race Theory’ Is Upon Us Like White On Rice

JAMES KIRKPATRICK • AUGUST 27, 2020 • 1,500 WORDS • 2 COMMENTS • REPLY
... Prospers–Even Under Trump, by Christopher Rufo, Manhattan Institute, July 17, 2020...
Moderator
PS: Thanks for the encouragement via the New Yorker article, Dieter. (I just read it a few mins. back.) I hadn't known anything about how this one guy's efforts had started a movement at top levels. I do remember when President Trump issued that order about the Federal workforce. I had no idea of the background.

I'll also add that Mr. Rufo's move to Gig Harbor, part of that beautiful Kitsap Peninsula across the Puget Sound, was a good one. I don't think it was all just the politics of Seattle that he moved away from.
Dieter Kief
PS
PS

Mod. I agree, the culture war is a thing.
But you sound a little bit dark here.

Here's one example why I think so: The culture war success story of Christopher Rufo

There's more of those. And I agree again: Peak Stupidity is
just another example!

Have a great Sunday Mod.!