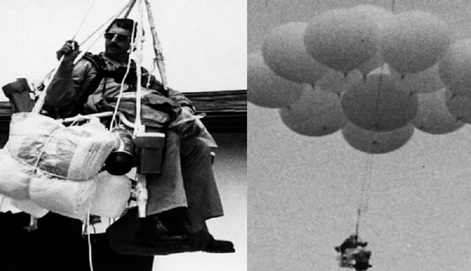 You can only see one tier of his 3 or so tiers of balloons.

It was 40 years ago today.
Larry Walters cut the line away.
He was going in and out of cloud,
Gonna make his flight instructor proud.
So, may I introduce to you,
The tale you've heard for all these years.
It's Larry Walters' nutso lawn chair plan!

Just as with the D.B. Cooper hijacking that Peak Stupidity memorialized (TO THE MINUTE, mind you) 50 years later, we've got a soft spot for these gung-ho, semi-crazy Americans of yesteryear. That's especially the case when it involves aviation, OK, of a sort, at least.

This Larry Walters was a Los Angelino, and they could be crazy bunch, back before most of the States was diversified. My theory was that all those young mid-Westerners that came for Aerospace jobs or just to "find themselves" back in the day could have more fun, being a couple of thousand miles* from their parents and any tattletales.

As a boy, yeah, you think of these ideas the first time you get to play with a helium balloon. "Well, if not me, maybe a toad at least ..." However, you grow up and you notice that people don't seem to do these things even when they get more money than that allowance you got, and most know the reason: It's crazy!

On Friday, July 2nd of 1982, on a beautiful** southern California day Larry Walter executed his plan to head up from his place in San Pedro a few 30 feet or so and drink beer and eat sandwiches and come down, or maybe head toward the Mojave Desert (I don't know - I've read and heard various versions - in his lawn chair, borne by 43 helium weather balloons. He had plenty of lift. 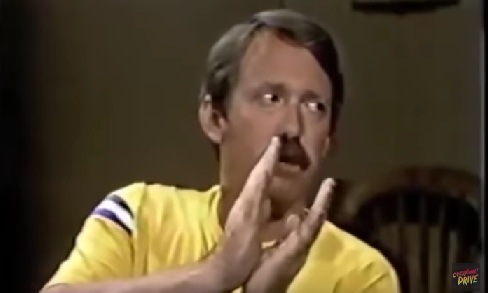 This guy was pretty sharp and he HAD put lots of thought into this. Well, on the "how" anyway.. The "why" is that this is many kid's dream. OTOH Larry was a grown-up. He had arranged for his girlfriend below to call a few nearby airport control towers about this during his departure, he wore a parachute, he had water bags for ballast, a BB or pellet pistol for taking out some of the lift, an altimeter, and a battery-powered CB radio.

What went wrong was that, as he sat in the lawn chair, airborne over his yard but tethered to a vehicle, he had more of his plan to execute before the tether cable was to be released. However, it broke (contrary to the lyrics up top - sorry). There was some slack in it, and then the cable got a big impact load and SNAP. Larry in his lawn chair had a nice climb rate, and he got up to 16,000 ft. over busy Los Angeles airspace, the Long Beach area, before his conveyance leveled out. The pilots of two airliners, a Delta and a TWA jet, pointed this conflict out to air traffic control.

He got down with a little bit of trouble involving power lines, but safely anyway.

I won't go through the whole thing. A website called Groovy History has a pretty nice narrative of the story here, but, back then, late night TV guy David Letterman invited Mr. Walters on his show, as I screenshotted just above, so the reader, if he's gotten this far, will want to watch the 10 minute clip.

Unfortunately, though stable that fine day in his lawn chair over Los Angeles, later in his life Mr. Walters was not so much, or just felt he nothing to live for, so he shot himself in the heart, dead, 11 years and change after his crazy flight, in the Angeles Nat'l Forest, north of the city. That's a sad story, but I can say that hearing of this incident brightened up my day and must have done the same for millions of other people.

I don't have much more background on the guy, but Larry Walters seems to have been a real Los Angelino. Billy Joel sings more about the people that came out there to go find themselves in Southern California and lose their other selves. Los Angelinos is from his 1974 album Streetlife Serenade, but I know this great live version from his Songs from the Attic better.

"Going into garages for exotic massages, making up for all the time gone by."

Have a great Sunday, Peakers. Thanks for reading and writing!


PS; There's a 2003 Australian movie based on just the balloon & lawn chair concept but nothing else, that I want to see, called Danny Deckchair. That reminds me of the also mostly fictional movie that was based on the D.B Cooper story, Pursuit of D.B. Cooper.


* There are a couple of old ballads by 1970s pop artists about being homesick in Los Angeles, but one, Dan Fogleburg's Illinois off of Souvenirs got the milage wrong. No way is anywhere in Illinois 3,000 miles from LA. Songwriters!

The other song I recall is James Taylor's Hey Mister, that's me up on the Jukebox, off of Mudslide Slim and Blue Horizon. He sang:

** Well, I'm assuming, since he wasn't instrument rated, or any other for that matter. Also, California is always beautiful, right? I never rains! Gave way to a westbound 747. Didn't stop before deciding what to do do...

Moderator
PS: Mr. *Spackler* - sorry to mess up your name. Thanks for writing in, for, AFAIK, the first time.

Mr. Smith, I got to watching Chucky Wright. From the beginning, 17,500 keeps him under Class A airspace so he can be legal. I am looking forward to watching the rest in the morning, but wanted to write back to you all first. There are also stories of hang gliders getting caught in updrafts from thunderstorms and ending up about 3 miles higher than they wanted to be. Problems of course, are the cold an deficit of Oxygen. Again, I haven't watched yet, but I can tell this guy is no crazy man.

Mr. Ganderson, I can remember that you stuck this URL here for one day, at least. Thank you.
Moderator
PS: Mr. Spangler, but it's sunny LA! How can it be cold anywhere? Just joking - from what I read, this guy knew quite a bit and did a bunch of planning. He only planned for this initial flight to be tethered (so, I suppose not technically a "flight") at 30 ft. up. He mentioned going to the Mojave too, but I don't have his plans in my head.

I am glad you liked the post, and it sounds like you enjoyed hearing about this. Yeah, I think something like this would brighten a lot of people's day. Just a kook not out to do any harm, doing something we all may have dreamed about... but had a voice in our heads saying "that's freakin' crazy!"
Ganderson
PS
Mr Moderator- my favorite US Blues is from 3/20/77; Winterland, San Francisco,, CA. I couldn’t figure out how to separate the song from the whole show- perhaps you can. The whole show is great, BTW, the best GD performance I ever saw live.

Chucky Wright Flying To 17,500 Feet on His Paramotor!
https://www.youtube.com/watch?v=L1Z8YT6w7Rc

☮
Carl Spackler
PS And no Darwin award! That is awesome.
It was before the age of sailfawn (cellphone) or digicams so that wasn't going for him.
It probably isn't that cold at 16,000 but still you should have some proper gear on.
Alfred E. Newman for preezy of the steezy because how could it get any worse.
The Alarmist
PS When the country tilted left, all the fruits and nuts rolled to California.

Unfortunately, as it started to tilt back to the right, they were liberally dustributed across the land, and they took root before they could be rolled away again.

I guess two and a half centuries was a good run.

USA, RIP.
Moderator
PS: 3) I'm not really sure, Mr. Hail, but, as I spent some time in LA, I'll go with the old SCROTUS brief "I know one when I see one." This guy on Letterman came off as a real Southern Californian, though a bit high-strung. Yeah, the mass immigration changed EVERYTHING.
Moderator
PS: Canada Day, eh? I supported those truckers of course, Mr. Hail, but this sounds like the same thing I wrote about this country. If you celebrated the day, are you not celebrating the government of Justin Trudeau while you're at it?

I know YOU aren't, Mr. Hail, and I think I know where you stand, but will everyone else know when you celebrate the day in some manner. (Of coures, you could explain in a blog post.)

BTW, just along these lines, an old anecdote of mine is of a nearby dorm resident back in the day who had a big Canadian flag on the wall of his dorm room. "What, you don't sound Canadian?" (I didn't know WHAT Canadians sounded like, but he sounded local.) "No, but I'm a big Rush fan!" That's the band, of course, but WTH? Some time later he let me listen to "Tom Sawyer" and "Limelight" on his Walkman speakers, and yeah! But, why the flag again?
Moderator
PS: Thanks for writing in again, Mr. Hail.

1) Yes. Of course, the 1776 event was more important, but I didn't hae this bit of history in my head. I am as much of a patriot as anyone, and my boy has been getting this history from cartoons (I know, ugghh), but at this point, all I put up on the official Independence Day is that Grateful Dead video of "US Blues".

For the last 10 years, maybe more, putting the stars and stripes up has felt like supporting the Potomac Regime more than anything to do with the great Founders of this nation. At this point the Potomac Regime is a much bigger enemy than anthing the Founders ever faced. I don't mean in manpower and force, as we still overwhelm them! However, the amount of evil we are facing vs. the British and King George III that Colonists' faced, well, just think about it.
Hail
PS

"Larry Walters seems to have been a real Los Angelino"

What does "real" mean here? What is the quintessence of a Los Angeles person? Presumably that is a historical archetype, which got swamped in the deluge of migrants dumped over a few decades.
Hail
PS

Related: PEAK STUPIDITY again neglects to mention Canada Day, July 1, (Friday, this year), so I will take this opportunity, in part to pay tribute to the heroes of the Freedom Convoy movement, whose efforts may have had international influence of a kind truly difficult to achieve.

That "Canada Day" refers, I think, to some legal document the British crown granted its holdings in North America, in some otherwise-nothing-happened year, was it about 1867?.

The bad news: I regret to say that we STILL cannot legally enter Canada even now, July 2022, unless you successfully fake your way into their Vaccine Master Whitelist database.
Hail
PS

This is the July 2 commemoration you were hinting at?