Wave that flag. Wave it wide and high... 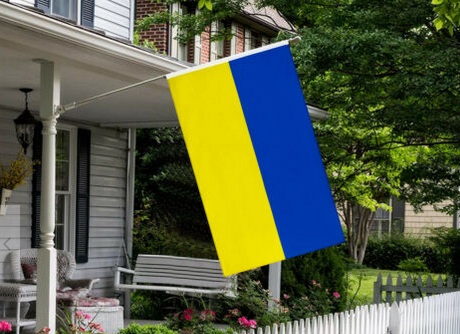 Nope, this is not Peak Stupidity's Independence Day post come early, so our bloggers could take off the long weekend. We'll have our usual Grateful Dead US Blues music up on the 4th. This is about different flags. I noticed that a neighbor of ours' blue and yellow "UKRAINE! UKRAINE! UKRAINE!" flag seemed brighter and neater than ever.* My 10 y/o pointed it out, as he has other of these flags around the neighborhood.**

It took one of commenter Hail's comments (under the post Keep Cash King below) to remind me, but with an additional point that I'll add in.

This neighbor is a hard-core member of the ctrl-left and has been for as long as I've lived here. I know that from the yard signs touting the usual suspects. After understanding her political stupidity, her yards signs became useful to me, as she would put them out for any old odd-numbered year election, maybe some Tuesday in June, and I would make the un-planned small effort to go vote against whomever was on the sign.

Why does someone like her fly the Ukraine flag? Neither her last name nor first name sound Ukrainian. She's not all "rah, rah, USA" and for anything our MIC comes up with, like lots of people supposedly on the right are. There's no American flag next to it for one thing. (Thanks, Mr. Hail.) I don't know about this particular neighbor, but it's not like all the Ukraine flag fliers are Jewish and have that whole "Cossacks are coming!*** mentality about the Russians, well, lifted for that short 70 yr. stretch due to Communism is good, mmmkaay?

60 years ago, this lady would not be pushing for "closing the missile gap" to keep the Russians at bay, and if she kept up would have been on the side of Castro, the Sandinistas, Salvador Allende, Angolan gorillas****, and any other of the Commie Resentidos around the world that "the Russians" were supporting.

It's nothing but mindless media brainwashing, I suppose. They've been a part of the ctrl-left Establishment for so long, that it's just what you do: They say "Go Ukraine". You put up a stupid blue and yellow flag on the house. You know support NATO, not something you'd have done when the organization mattered, say in 1980. I do wonder if this war were still going on during the Trump 2.0 administration, whether that flag would still way-ave ...

PS: Peak Stupidity concluded early on (at least by March 5th of this year) our post Is the Russia/Ukraine War another piece of Infotainment? with a "YES". I have nothing to argue on the war there, as I simply don't know much about any details, other than the instigation of the trouble 8 years ago by the American Neocons. You just won't read much about it here, but I understand the interest for anyone of Ukrainian or Russian background, armchair Generals, those working in the offense defense industry and some real military historians. We don't care too much, as long as the long-range missiles don't start flying.


* At this point, it's only about 2% of the houses that are Ukrainian-themed, but it had been closer to 10% back in the Spring.

** I think I'm kinda seeing things lately, as I also had that odd feeling about the ice cream containers being possibly smaller, as mentioned in the last post.

*** Thanks, iSteve Sailer, for the concept.


Moderator
PS: Yeah, I saw the Alarmist's picture,, Mr. Hail. That picture is freaky. I don't know what the circle is about either. How about July be "Americans Month", with emails, posters, and flags to match? Hey, we could even put them up at embassies around the world!

That'd be an easy enough survey to do. One might even be able to do it on a bicycle. I was about to write you back about the signs too, but then I saw you mentioned them. Yeah, having these general ones, as opposed to "So-and-So for School Board" is a new, virtue-signaling thing.

I would be up for doing a survey locally, but any neighborhood has its biases. Doing it over a small area (say 500 or 1,000 houses) a number of times spread out in time to see the changes would be interesting.
Hail
PS

"At this point, it's only about 2% of the houses that are Ukrainian-themed, but it had been closer to 10% back in the Spring."

I would be interested in a census-style study on how many homes have been flying the following:

(1.) U.S. flag only (or any other specific flag symbolic of U.S. historic nation)

(4.) Another specific left-wing political banner shaped into a flag form, like like BLACK LIVES MATTER or the "Rainbow" flag

(5.) Any other foreign flag non-U.S. and non-Ukraine

(6.) Another non-political banner of any kind flown as a flag

This would amount, in part, to a kind of political census. But an even better one would be the yard-signs.

Some of you who have longer perspective may have more insights into this, but I believe a big change is the proliferation of political yard signs. They used to be seldom seen at all outside narrow political-campaign windows before elections, but at some point they became common all the time. Especially the almost-farcical variation on the "In this house we believe..." followed by a list of left-wing slogans, a top one of which was always "that Black lives matter."
Hail
PS

The political flag that has evolved out of the original Gay Pride "rainbow" flag likely outcompeted the Ukraine flag in June. But now that LGBTQetcetcetc "month" (what the heck?) is over, will Ukraine make a come back?

See The Alarmist's picture in the previous thread: