That'd be Piece of Of Stupidity, not Angel Martin of The Rockford Files.

I won't mention the cars this time, as I did here and here. ("The Rockford Files" private detective TV show is a small bit of fun for us here at Peak Stupidity - 3 more posts on that show are here, here, and here.)

It's related to cars though. In the Season 3 episode Coulter City Wildcat, Jim Rockford's Dad Rocky wins a lottery for oil rights on a land parcel that has a well already on it putting out oil out the ying-yang. Greta Thunberg would not have approved when Jim opened the valve to see and oil poured out at a rate in multiple gallons per second onto the ground. What struck me is the price that Jim used for his quick estimate of how much money, he, Rocky, Angel, and maybe lawyer Beth Davenport* were going to be getting used a price of a barrel of oil of 12 bucks. This was 1976, after the 1st oil "crisis" in '73. Yep, go here for a history of West Texas Intermediate Crude, but be sure to turn off "inflation-adjusted". That was about right, of course. Per this graph, that 1st shock in '73 only brought this benchmark oil from ~$4/Bbl up to $10-$11 and then there was a slow rise through the mid-'70s from there to ~$16.

Well, with the champaign flowing, Jim's (or was it Beth's) quick estimate was $42,000 each after all taxes, expenses, etc. Rocky seemed a bit disappointed, surprising to me, as that would be be a couple of hundred thousand bucks in buying power of today's money. However, Jim meant that was per day! Yeah, well, you can't keep the show running like that, and you know Jim almost always doesn't get paid, so, no, the US Government Geologist came in with some bad news about the deal.

I know there was something else neat or funny, but I can only remember one thing that I've seen more than once. Jim is chasing someone or being chased in his Trans Am on the dirt - a couple of shows later it's in a huge garbage dump, yet everyone's tires are squealing! Whaaaa?

Oh, and in the latest episode I watched, the worthless Angel Martin got married (the girl was fairly pretty) as part of a con. Late that same night, Jim heard a knock on his trailer door (no, he hasn't learned yet), and it's Angel, with "Jim, my marriage is on the rocks." Haha!

(Thanks for bearing with me on this, readers. It's just some fun for relief from the stupidity of the modern world.)

Now, onto the minor POS, the book in question (with part of the cover shown below) came from one of the FreeLittleLibraries, speaking writing of them.. This is again not a book review. Some of the stories** are good and some not, but you'd have to be an experienced sailor to understand all of them fully. 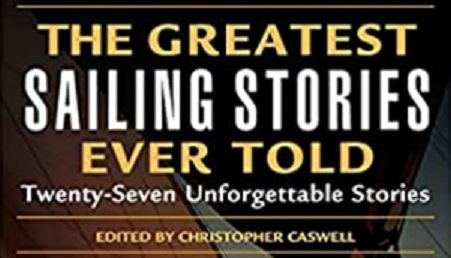 It's just the introduction by Christopher Caswell, the very 1st page, in fact that has an error that I think anyone who has some perspective would catch. It's says there are 140 billion square miles of ocean on the surface of the world. Come on, Chris Caswell! Come on, editors! That'd be "million" - I did a quick calculation using 4πr2 for a 4,000 mile radius earth and the oceans being 3/4 of it. That gets me 150 million mi2 . Yeah, the guy meant 140 million. Couldn't anyone catch that on the first page?! It's not a numbers book - that was one of very few I recall. Remember "DIMS", people. Does It Make Sense?

* I can't remember already how she was involved, but Jim would have treated her pretty well anyway. He would have been able to pay her back each time for tacos for breakfast, for example.

** I had no idea that William F. Buckley was such an accomplished sailor, having sailed the Atlantic Ocean even.

Mr. Moderator, I did not wish to imply you were in error- merely to direct you to one of my favorite Rockfords. I love that pic of Angel and Jimbo.

I’m rewatching Rockford while I’m on the elliptical- and for variety I’ve added old episodes of Dragnet into the mix. A good barometer of how my view of the world has changed- back in the 70s I’d laugh hysterically at Joe Friday’s rants- now I nod, Jack Webb style, and think, “he’s right, you know that?”
Moderator
PS: Nice job, Mr. Ganderson in catching that error. It was not truly an error, per se, as I had searched on "Drought at Indianhead River" for a picture - man there are plenty for every episode - lots of people must really like this show. Either there was something in that previous episode I did want to write about (I think that was the case), or I got the name wrong when searching. Later I realized that I wanted to mention the $12/Bbl oil from "Coulter City Wildcats" but was not in a position to get a new picture then.

"Ya' big dummy!" - that was it, from old Fred Sanford. Yeah, it was fun. Even the inter-racial stuff, though not at all funny in real life much of the time (especially going back a decade from the show) was made light of in the show. Remember the 2 cops. The White one would try to speak contemporary ghetto lingo. "OK, let's crack." "You mean split!", the black cop would roll his eyes. Was it a more fun time or was that just that we were all much much younger?

I will check out those Rockford movies at some point, Mr. G. Thanks.
Ganderson
PS

My love for Rockford is well documented on these pages- Mr. M, is the one when Angel gets married the one where said Mr. Martin runs afoul of the Bojagian (sic) Brothers, with the Armenian in chief being played by Avery Schreiber? The pic you have posted is from another of my favorite episodes “Drought at Indianhead River”

I dunno if you’re aware, but they made a bunch of made for TV Rockford movies in the 90s- the quality varied, but for me it was like seeing an old friend. One of them begins during the Rodney King riots, with Angel looting a store!
Moderator
PS: Thanks for the memories, Mr. Clampett and Mr. Russell. Regarding "All in the Family", even people, as in my family, who DID know that the producers/writers were trying to make fun of people like Archie Bunker, we were still on his side in his arguments with the Meathead.
Jack Russell
PS TV was great in the day. Certainly greater before the rural purge, but even after it maintained some quality. I never felt the need to get upset by it. I'm something of a hillbilly, even though the Beverly ones were spoofed, I still appreciated it. These days I'm probably more Oliver Wendell Douglas than Jed Clampett, but I can still find them both endearing. My family was more in the camp of the ones who thought Archie Bunker was a hero. We were stupid rednecks who didn't appreciate that Carrol O'Connor and Norman Lear were trying to make fun of people like us. We took it as a badge of honor. It was even possible for white trash like ourselves to enjoy Sanford and Son. Even Smitty.
Jed Clampett
PS Teevee was outstanding back then and no way that Sanford and Son or All In The Family could be made today.
Rockford had the cool Firebird around the time of the Smokey and the Bandit Trans-Am.
Malibu Kalifornia is where most of it was filmed.
Found the CHiPS soundtrack and the Telly Savalas Who Loves Ya Baby recently from pages not located in the glorious people's republic of Amerika!
Ennio Morricone soundtracks, Mel Brooks Hitler rap and Where Eagles Dare for the morale WIN.
Moderator
PS: That'd be Glenn Beck. I even had him sign a book of mine (not his book, as I didn't really want to buy it, but the classic "Stick & Rudder" when he came to town. 5 years later, I wanted nothing to do with this cuck.
Moderator
PS: In the words and (imaginary) tone of Johnny Carson, "I did not know that.". Good on him, Jack. I think I would also imagine him the same guy. Yeah, what a mooch, but before he got his new alias, this guy was a force for good in NY City ... and then where did Paul Kersey move to? Was it Chicago in one of the later movies.

It would be nice to have a post on Paul Kersey and the "Death Wish" movies, but it's been about 10 years since I watched any of them. I used to go down to this clubhouse when I was unemployed to watch Glenn Back (my exception to my no-TV thing for 23 years (plus the re-runs of "Seinfeld" at hotels till TBS phased it out and the commercials getting to much for me) talk and write about century-ago and modern Commies in the US Government on a chalk board. At one point, they had all 4 (maybe 5, but I only saw 4) "Death Wish" movies on for a series of nights. I watched them then.
Jack Russell
PS Angel gave Charles Bronson his first gun in Death Wish. Well, the actor Stuart Margolin did. So I can't help forgiving Angel whatever stupid stuff he did on the Rockford Files; it was paid in full by Aimes Jainchill.