It's long over, for the unknown soldier 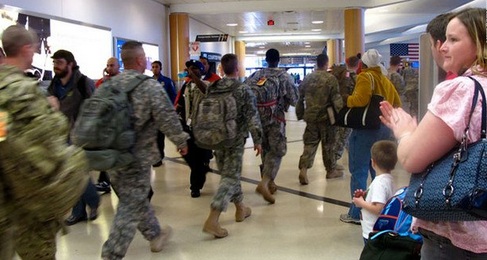 I've seen this a number of times lately. A bunch of army soldiers were mustered (?) in the airport, ready to either go to more training, or, very likely, to head overseas to "defend America". I don't have a word to say to them. A few times in the past I've sat near a group of them on the airliner and asked where they are headed. It usually is overseas.

No matter where it is they are headed, I have no reason to appreciate their being in the American Army. As I've written here before, not in the same words, that "thank you for your service" crap makes me sick to my stomach. These soldiers are not serving the American people in any way. Who they serve is the Deep State, the Neocons, and the Globalists?

I know, most of these young people join up now for the employment, as this American economy has sucked for quite a while. There are great benefits, if you put up with a little hardship - that's really not so much right now, when the American military fights only when it has overwhelming odds. (For more on this topic, see the Peak Stupidity posts Death from Above, Assasinations, and Declaration of War, Arrogance from the American Military, and Outside it's America.) That may change, and I'll feel more sorry for them

There is the diversity and gender stupidity that has me looking on some of these people with disdain. I see some of them and wonder "wait, these people are supposed to become lean, mean, fighting machines, and defend me?" (It's that much more disdainful when they've all got face masks on, even the freaking Drill Sergeants!) For the White men, I am sure they are in for a Dieversity shitshow. They will have to put up with the organized discrimination against them and the insults, indignities and stupidity, even though they are the very group that has the biggest percentage of people who will actually do the hard fighting, and the biggest percentage that is there to actually "defend my country."

No, of course I don't want to spit on them, as if this was 1960s'/'70s during Vietnam. They are not the instigators of the war-mongering of America. Upon the Vietnam War, it's easy to look with hindsight, but there were worries about the Communists taking over much of the world. The Korean War had been fought only a decade before with nearly as many American soldiers killed* as in Vietnam. OTOH, maybe we should have LEARNED from Korea.

Then, when was the last time soldiers WERE seen as defending their country by Americans? I respect those who did the "containment" of the Communists during the Cold War. Whether this country should have been involved in WWII OR WWI is questionable, but the soldiers were greatly respected. The last time American soldiers were truly defending their countries was during the War Between the States. I wrote "countries" (plural) as the Army of Virginia, for example, was defending what was basically their country back in the day of real Federalism, Virginia, from an invasion.

That was 157 years ago, though. Now, I don't see any defense of my home and land, my family, and myself coming from anything the US Army does. I have nothing to say to the modern American soldier.

* For a good book on that war, try This Kind of War: A Study in Unpreparedness by T.R. Fehrenbach.

Moderator
PS: ICB, I hope it's more of a separation, obviously with some craziness involved (as they don't want to let us go), rather than a "burn it all down" thing, but something's gotta give.

The "thank you for your service" crap makes me sick to my stomach too, Achmed. I think Americans definitely should not have gotten involved in either so called world war. America is protected by two giant oceans and the criminals masquerading as "government" had no business sending American men to fight (and die) for Jewish power in Europe.

Mr. Blanc, sometimes when I'm writing a larger comment and I don't want to accidentally loose it I'll copy and paste it into my office program and save it so I can work on it and then paste it in when I'm finishd. One time the power went out and when I returned to the computer my browser recovered everything, including my unfinished peak stupidity post, which was a pleasant surprise. Still not sure how it did that.

Mr. Anon, I'd imagine most of the soldiers "fighting for our freedom" have never heard of Henry Kissinger.

Hope you all have a great evening!

Maybe it'd be worth asking one of these soldier "fighting for our freedom" if they agree with Henry Kissinger, former National Security Advisor and Secretary of State and current Grand Old Man of the American FP establishment, if they agree with him when he said that soldiers are "dumb, stupid animals" fit only to be used as pawns in foreign policy?

Would they still feel that they are FFOF?
It Could Be
PS Someone has to make the world safe for the glory hole at the rainbow bathhouse.
I almost feel bad for people who think that everyone in the military is some Sgt. York hero and I really do feel bad for the copsuckers who think that the poleece will be there to protect and serve them.
Maybe this burn it all down thing is the way?
Moderator
PS: I am sorry you lost your writing, Mr. Blanc. I've had it happen to about 10 entire posts here over the years - the explanation of why not hitting save every couple of minutes is not worth putting in here. I do agree with your final point. (Some would say: get in to train only, for the skills you will need on the other side. They've got a point, I guess.)
The Alarmist
PS

A couple weeks back, when I was in the US, I was with a group of mostly younger people (mid-thirties, I’d guess), and when I mentioned my time in the military, one very earnest guy said, “Thank you for your service.”

I gave him a kind of quizzical look that was probably received as “WTF,” so he asked if he had offended me. So I replied, “No, it was something I didn’t hear much of in the late ‘70s and early ‘80s when I was keeping the world safe from democracy,
MBlanc46
PS Bugger. I just accidently deleted a longish comment about the rights and wrongs of American military actions since 1941. I won’t try to recreate it, but I will make the final point: any white guy in the US military is either a fool or a bad guy.