The ICE men and the who-ers of the skies

If wishes were horses and reins were really whips, maybe we'd have a more secure border. 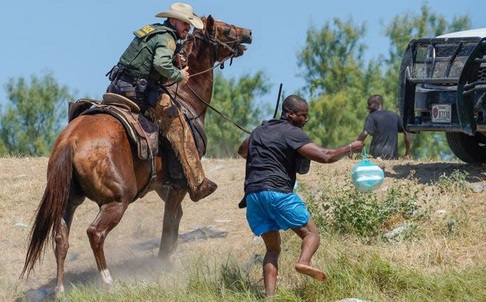 This picture above is from the Lyin' Press narrative of earlier on in this Bie Dien Administration hard-core open borders push as part of his work in on behalf of the Great Replacement Policy. If you don't recall the story, Steve Sailer will refresh your memory here on VDare and here on The Unz Review with comments.

VDare has writers who have been deeply involved in immigration control or lack thereof in US Feral Gov't positions, and some who may still be. These guys are invaluable in getting us the details and proof of the traitorous policies. Peak Stupidity doesn't have people like that, but I do get around more than many. That's when I end up talking to people involved at the small level in big things. An example from a few years ago was my running into a load of ICE agents returning from Iowa. I didn't get to talk with them much, but I realized a day or so later that they had been returning from raids on the Meat Packing plants in Postville that were packed by Hasidic Jews with illegal Hispanics. I had just read about it on VDare. In fact there were a couple of black-hat outfit Jewish guys traveling too!*

I might be more calm just staying at home, if I could stay off the internet, a big "IF" to ask, but these interactions are very helpful. Here goes then, as promised on Thursday.**

In this case I talked to 2 men from ICE (Immigration and Customs Enforcement) and then, on the same day, a Captain who flies for Swift Airlines, now iAero Group (but that latter name sucks, so I'll use the former). I'll start first with the 2 ICE guys.

Though I put the picture above up, I know that ICE is not the Border Patrol. There have been a few re-orgs and name changes just since I've been following this issue on VDare for 20 years. Anyway I men two guys, not in any uniforms. There was a black guy and a white guy, like in a Hollywood movie, not necessarily "partners" per se (in ANY sense), traveling together to Alexandria, Louisiana. If a mention here of the big criminal illegal (redundant here, right?) alien detention center there on the airport property rings a bell, it because I discussed it when discussing Swift Air (the good and the bad) in that 1st Bai Dien Human Trafficking, but see also CPAC, gutsy Michelle Malkin, and Swift Airlines from 3 years back.

There was no one else around, so I walked up to these guys to get their take. Because I had just read and posted about the latest outrage with the trafficking in Omni Air 767's into Newburgh, NY, I asked the two guys about this latest. "Yeah, that shit is real, man!" the black guy told me, as the other guy agreed. They know about both the Swift air flights and the Omni flights. They sounded pretty pissed off too. Well, I knew this was real, but it was good to hear to those tasked by the taxpayers with securing the borders did not like seeing their agency being used for the opposite. I left them with "I hope someone will let you do your jobs sometime." 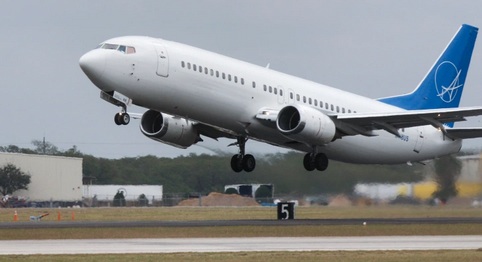 Later in the day, I met a guy who flies for Swift Air itself. This time there were a bunch of people around to hear. I didn't care. I asked this guy directly whether he had been involved in the flying of illegal aliens from the Texas Mexican border into White Plains and other locations. His answer was weird because at first I thought it was "yes". "How can you do that flying? It human trafficking, is all it is!" I mentioned the treason those operation entailed and "I think Biden should be hanged for this!" Yeah, other people were listening. That was good.

Well, the pilot sounded like he was on my side, and I don't he was humoring me. He spent 10 minutes talking to me about this and would have stayed longer if I hadn't had to go. As I wrote in that 3 y/o post, Swift Air is mostly a force for good. Well, of course, it's simply a Charter Airline trying to make some money, not really some "force" at all, per se. However, I am glad to see something good going on. The people they fly, formerly using the call sign "Repatriate FLT#" on the radio, are the worst of the criminal scum. Swift Air takes them from that Alexandria, LA detention center (OK, prison) via Miami, to points south.

I asked this pilot about some of the same things regarding the flights that I already noted in that 3 y/o post linked-to above. Yeah, the guy told me, a 737-800 filled with 150 or so prisoners with 15-17 flight attendants , nah, armed guards is the norm. There is no business class and there is no beverage service. These guys are handcuffed and shackled.

I put that picture up top due to the black guy running from the Border Patrol horseman. People really ought to know that there are people from all over crossing easily into this country. Many are Haitians. In our conversation, the pilot got pretty excited telling me how vile and nasty the Haitian prisoners were especially. Many of the aircraft seats were torn up when his plane landed in that country. Though handcuffed, they still manage to throw rocks at the airplane and into the engine inlets when they got on the ramp. There was something about some woman who got naked ... (yeah, I didn't see how this fit in either, and the guy wasn't impressed by the woman part - yes, I asked "was she hot?") It is not all Haitians. Of the great many Hispanics, some are Salvadoran. He talked about those violent MS-13 guys too.

The words "vile" and "evil" were used a number of times by this guy, and I asked him if he got some kind of hazard pay. (They sure as hell don't want to break down in these places, so they bring a mechanic and tools, and, I assume, some parts.) The Globalist elites of America are increasingly importing these people for their Great Replacement Program. We will become a country full of these vile people if this doesn't stop and get reversed.

The question I still have is whether this pilot DID do some of the flying of the illegal aliens going the other way. He was a great guy to talk to, and maybe he feels bad about doing it. That's really not enough though. American cannot go along with this. Pilots are in VERY HIGH DEMAND right now. It's probably a better deal than anytime since commercial flying started - I kid you not! So it's not like pilots refusing to fly these flights, or just calling in sick to make it less blatant, would be hampered in their careers.

Let me put it this way: Charter pilots, put your country and your people before your minimum-day guarantee with double pay. Don't be the whores of the skies!


PS: Our post title is a reference to a really nice movie from 1988 called Full Moon in Blue Water that starred Gene Hackman and Terri Garr (whewww, I always had a crush on her!). Gene Hackman's character is not his usual tough-ass. I can't recall if his supposed southeast Texas accent was that good, but he amusingly pronounced "whore" as "who-er". (I recall that Terri Garr made fun of this in the movie.)


* I think this was before I started my blog, but I will do a search today for something. I can't remember for sure whether I perhaps DID blog about this... Hey, we got 2,300 posts, so it's not all just CRS syndrome. Update: Nah, I guess not.

Moderator
PS: "What knockers!" That goes with Adam Smith's pic of her.

I like that hot/crazy matrix graphic, Alarmist.
The Alarmist
PS

In 1985 I had a girlfriend who looked like she could be the twin sister of Teri Garr (in 1985), so I get the crush. Unfortunately, while she scored very high on the hot axis, she also scored high on the crazy axis, which put her in the Danger Zone.

🎶I went to the Danger Zone

Crashed and burned, but it was a great ride right up to ....