The posters keep telling me to look out for these guys, but I think I know what the guy looks like. I've seen him on TV!: 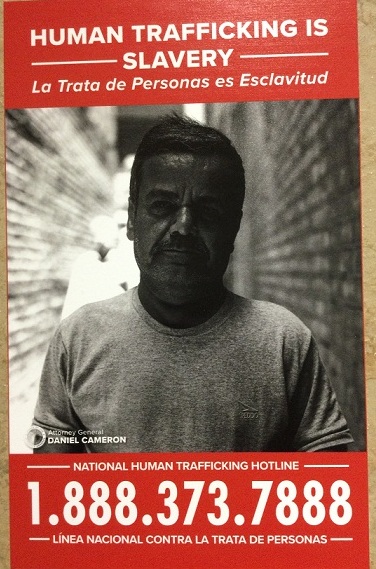 Peak Stupidity reported on the Bai Dien Administration's Human Trafficking program 4 months back, with quite a few details. Besides hero of mine Tucker Carlson's bringing up this new program that is part of the Great Replacement Policy that we have been discussing this week*, the New York Post has been out front with this story. I won't go into a long introduction on that, as it's in that previous report, but I do want to nominate the New York Post as the new "Paper of Record" for doing what people use to call "unbiased plain old news reporting". What a concept!

The last human trafficking post was about this very deliberate mission of the flying of illegal aliens from the Texas border towns - El Paso, Del Rio, Brownsville, Harlingen - those are just the places I was told about recently - to points in the interior of the US. In particular, that post noted the comings and goings in the middle of the night of iAero Group, formerly Swift Air 737-800s into Westchester County, NY's White Plains (KHPN) airport. That place has a fairly short, and fairly sloped runway that is tight enough for those 737s**.

These people are put on buses and sent to wherever. This is why that 11 million illegal alien number is such bullshit and why 30 to 40 million is closer to the truth. Not this exact human trafficking scheme, but plenty of other deals have been going on for decades! 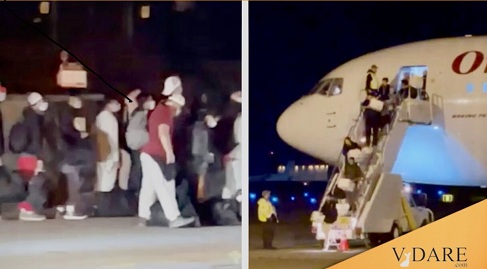 Now, via VDare, and before that the New York Post (thank you both!), I got the info. on new operations to bring even bigger loads of illegal aliens into the country. It was kind of indirect from VDare, as the post that clued me in was titled Hide The Girls. 20-Year-Old “Migrant” Man Registered In N.Y. High School by their as of this year, HIGHLY PROLIFIC writer A. W. Morgan (more on him in a post shortly) This post of his has the image at the top, from which I saw the log of Omni Airlines a charter outfit. There was also the link to the New York Post article Biden admin sending ‘adult men’ on migrant kid flights, GOP’s Rob Astorino claims
.

Before I move on to the air human trafficking, let me paste in part of the new Newspaper of Record article:

Astorino — who is looking to unseat Democratic Gov. Kathy Hochul this fall — told reporters outside Stewart International Airport that one 20-year-old male migrant was placed into Westlake High School in Westchester County as a junior and is now 21 years old.

“I can tell you — and we have video — that it is not just the little kids with backpacks being reunited, reunified with their families … it is an expansion of this program,” the former Westchester County executive added. “And what’s happening is we’re having on video, clearly seeing many teenage boys, late teen, early 20s, who are single adult men, who are getting off these flights.”

Single adult males are the demographic most often turned away by border authorities, as they are more likely to be deemed economic migrants rather than legitimate asylum claimants.

The resettlement flights have been landing at Westchester airports since at least October of last year, when their existence was exclusively reported by The Post. They were briefly suspended following the exposé, but have since started up again.

During Wednesday’s press conference, Astorino detailed two recent flights for which he claimed taxpayers are “paying the bill.”

Actually, no, the big bill is not by any means being paid yet. I'm not talking due to borrowing money for the charter flights, but this is about the Great Replacement. This bill will be paid by our children and grandchildren. But lets talk airplanes and airports.

I suppose chartering 737s with 150 illegal aliens each flight is just not speedy enough population replacement for the Bai Dien Administration nation-destroyers. "We're gonna need a bigger boat airplane", someone must have muttered as he saw only 3 buses get filled up at White Plains one night.

This new flying, based on the picture I see above Mr. Morgan's article is being done by Omni Air International***. That charter outfit has been around for just under 30 years, flying soldiers around the world. Right now they have 11 Boeing 767s (-200s, and -300s), such as the one shown nose-only in the picture, and 3 B-777s. 14 planes doesn't sound like a lot, but airplanes get around! They don't make money sitting on the ground, so other than for maintenance, they fly as best as the schedules will let them. (Pilots of this type of company fly long schedules - 2 weeks, or 16-17 days for these guys, and they are flown around to meet the planes, even overseas on a regular airline, if need be.)

These planes are too big to land on that short runway at White Plains. (They would be coming home empty, having discharged their cargo of wretched refuse, so they possibly could take off, length-wise. However, the width might not be safe, and the pavement my not be made for those heavies.) Therefore, and probably for a few other reasons, the Omni 767s are flying I'd guess as many as 275, since there's no 1st class, illegal aliens from the Texas southern border towns into Stewart Field (code SWF) in Newburgh, NY. This airport, twice as far up the Hudson River from NY City as White Plains is - on the west side of the river, BTW, as opposed to White Plains, has an 11,800 ft runway**** You can land and take off just about ANYTHING in that length.

Let me give those other reasons. I have been to both of these airport terminals. Though Westchester County/White Plains has lots of commercial service, the terminal was meant to be an FBO with a few offices, I think. It's tiny for a place the purports to have 10-12 gates, OK "gates" per say, but just parking spots, last time I've sen the place. Still, it gets packed with people, and it works. In the meantime, though Newburgh's Stewart Field is HUGE, acreage-wise, the terminal may be not much bigger than the one at White Plains, but with only one handful of gates, max, as I recall. They just don't have much service, the place being twice as far from New York City (just my estimate, your milage, haha, may vary.) In fact, the airport commission or whomever, has changed the official name of the place to "New York Stewart" in order to fool some of the New Yorkers, or the visiting rubes, some of the time.*****

That's what a commenter on unz.com had noted - Newburgh's airport is less known to people. That's a reason to do human trafficking in there. Then, there's the NY Air National Guard's 105th Airlift wing, that has C-17s based there. Could the US government, through their middleman (don't know if it's still that shady MVM operation discussed in that previous post), be using the military ramp and personnel to help them in their criminal activity?

There are too many Americans who will ask no questions, even if they are roped into something as obviously nefarious and anti-America as these operations are. Sure, the military would help. (Maybe down in Florida or Texas, it's be a different story?) Then those pilots will fly those heavies in there, because "just doin' my job." "It's what they pay us to do" is one I've heard more and more lately.

I will relate the personal conversations I had with both a Swift Air (iAero) Captain and 2 ICE guys that are involved in something related in a post tomorrow I hope. This one has gotten too long already.


PS: Just because these newer operations are going on with larger aircraft and a different drop location doesn't mean the other ones described previously aren't still going on.

* This week is kind of odd in having a theme - the same topic for all but one post so far. Most times, Peak Stupidity is all over the map. That is mostly just to my writing posts on whims and when the thoughts are somewhat together, but I also think that readers might like lots of variety. Immigration Stupidity-Fest week is probably a one-off.

** The place was built to be a General Aviation airport, but I've seen times it was busier in the morning than an airport like say, Knoxville, Tennessee. It's right under NY City combo-JFK, EWR, and LGA Class B airspace, making operations complicated, unless you do come in the middle of the night. As a bonus, late at night, one could get in without talking to ANYONE on the radio - no shit, that's true.

**** Some of it is unused "threshold" for landing, but one can still roll out on it, if need be.

***** This reminds me very much of someone in Rockford, Illinois naming the airport "Chicago/Rockford" a decade or so back. It's about 90 miles west of downtown Chicago. Haha, yeah, I can see the phone call now:

"Hey, we made it. Can you come pick us up?"
"Where are you all, O'Hare or Midway?"
"No, the other one, the airport in Rockford. It was cheaper."
[30 seconds of silence from mute button]
"See if you can find the bus station. You're not in Chicago!"

Moderator
PS: Was it not on the primary emergency landing site list due to location, weather, or length? There are some odd place that are, such as the uncontrolled field with a 13,000 ft runway in North, S. Carolina. That's not "northern" SC, but the town called North.

Even Norwegian Vidkun Quisling himself, who advocated not resisting the invading Nazi Germans, was nothing as bad as the traitors we have in our country.
The Alarmist
PS

Stewart wasn’t on the primary list of Space Shuttle alternate landing locations, but it was a designated emergency landing location. Shame we can’t restart the Shuttle program ... wait, maybe SpaceX’s super Starship can carry a few hundred at a time to Mars or someplace.

There’s a term for a country’s leadership or pokiticians who facilitate those invading it: Quisling.