Really, I think there were 4 or 5 anecdotes that were too short to be stand-alone posts, but only 3 or in my head right now, so let's do this again. (We usually do this in threes in general.)


This one is a complete repeat, but dang it, it bears repeating! 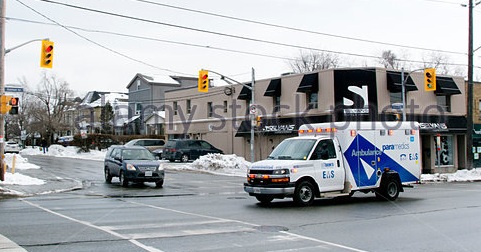 You can just read our 2 1/2 y/o post 1st Slow Pokes Responders. Maybe you didn't read it or have forgotten, so good...

The idea of an ambulance, driven by "First Responders", is to go pick up someone who is seriously sick or injured, QUICKLY, and then bring them to the hospital, QUICKLY. I get the idea that you don't want to wreck on the way there or back, causing a big delay and maybe even more people that must get to the hospital, QUICKLY. So, though these guys can disregard the traffic laws that would slow the process down, they must be careful about the driving nonetheless.

This was ridiculous (again), though! This one is a long red-light for those turning left. Right when it was about to turn to green arrows, this ambulance was ready to go through, in one of the the straight lanes in the opposite direction from the way I was facing. Everybody was stopped nicely. OK, so, as the ambulance driver, you slow way down or even stop for 1 second, scan the whole intersection, and make sure nobody has ignored the siren and lights. That may take 2 seconds even, but not any more, unless you have a seriously slow brain. I guess the guy did, as it was close to 10 seconds. I was flashing my headlights and waving the guy through. I didn't want to miss this light first off, but also, doesn't this guy want to get this guy before he dies, for cryin' out loud?!*

I am starting to think that the Millennials or whoever they are, have been staring at small screens at 1 ft. away for so long that they could take 5 seconds to focus in the distance ... or something. If you're that slow, you shouldn't be doing this job.

OK, well the next bit of curmudgeonry is about something completely different, a website called Seattle Bubble - I won't bother to link to it now (you'll see why) - that I used to view back during the couple of years BEFORE the housing crash of '07-'08. before my Zerohedge**-reading days. The blogger named "The Tim" used to post a lot back then, and his market was a great example of the bubble market - he called it pretty well as I recall.

What I liked the most about that site was the graphing software ("Tableau" I believe) that he used, especially when he used it for the monthly Case-Schiller housing price index*** of 20 of the biggest or most representative US metropolitan areas. It was interactive in that one could take off cities or add other ones to keep it uncluttered. Peak Stupidity has displayed screenshots of my arrangement of cities by region in our handful of posts on Housing Bubble 2.0**** - these can be found with our Economics topic key.

I used to really look forward to the SeattleBubble Case-Schiller graphs each month. Well, the guy has posted less and less frequently. I don't blame him for that, but then he doesn't keep up with those nice C-S graphs anymore. Maybe he was down to once or twice a year. That's not my problem today. My problem today is that The Tim has become a Communist. There didn't used to be much ideology on that website more than some suggestions at what local governments could regulate and some criticism of how the real estate market and realtors worked.

There were always some lefty commenters - whaddya' expect out of Seattle? However, I saw a post a while back by The Tim that was so ridiculously Communist-sounding that it gave me an easy excuse to never click on that site again. Bye bye, SeattleBubble! You were nearly my favorite 15 years ago.

This last item has to do with the Peak Stupidity post of about 2 weeks back on the 11 Million illegal alien number (yeah, right!) and our follow-up ost Estimating the illegal alien count.

Now, this one is on VDare writer James Kirkpatrick, one of the 2 writers***** that I long ago - before there were so, so many - dubbed the meat & potatoes of VDare, writing the less specialized and very substantial posts that made the site informative with always new stuff to read. I hate to even write this, as this is a very minor quibble compared to the excellent speech that he gave at the VDare castle a month and a half back. Mr. Kirkpatrick's speech was not all that American patriots may have wanted to hear, but it's honest, without false hope. The video was not up on VDare at first, when I first heard it, but you may want to watch him make this 45 minute talk rather than listen to the audio only. Additionally, he gave much more detail in the longer written version - it was not completely clear at first, but I assumed****** that Mr. Kirkpatrick pared down things from his written version for the talk, i.e., the written version has the whole talk plus a lot more. I read that too. It's all right here now - ADJUSTING TO THE POST-AMERICAN AGE—James Kirkpatrick’s Address To The First VDARE Conference.

At 3:40 on the video, Mr. Kirkpatrick told us "I believe it's from the statistics that we get from the Labor Department, so this is probably on the low end, but they said 11.5 million illegal immigrants ..." [My bold there.] OK, well he qualified this a bit, but "probably on the low end" is a MASSIVE understatement. I think Patriots who use these lefty rectally-extracted numbers are being snookered. Don't fall for this, such as "To put that in perspective, that's about double the population of everybody in the Baltic States." OK, first of all, almost NOBODY in America has BEEN to the Baltic States, so this means nothing. However, when you talk 30 million (and I'm open to 25 through 40 million), you can then get through to people better with: "To put that in perspective, this is the population of ALL of the entire Dallas/Ft. Worth metro area, the entire Denver metro area, the entire Seattle metro area, the entire Atlanta (HUGE) metro area, all of Chicagoland (as they like to call it) ALL PUT TOGETHER, oh and then, I guess the rest could replace everyone in every city in Iowa." Would that not get through to people? I'm using what I would bet good money on is a more accurate number.

Weirdly, the text on this longer piece by Mr. Kirkpatrick does not have this number, though it says later on "The Rule of Law died about 10 million illegal immigrants ago." Well, that one doesn't really pin anything down.

Anyway, I know this is not at all the best way to do it, but I wrote about this bit only because I had just mentioned terminating that 11 million number with extreme prejudice last week. I wrote this post not at all to badmouth James Kirkpatrick. I would have linked to his SUPERB talk at the VDare castle anyway. I ask you all to spend the 45 minutes if at all possible to watch the whole thing and think about his conclusion. (The written version is great too. Though longer, it may be a 20 minute read or so.)

It's not a happy talk, but this is really food for thought, with Mr. Kirkpatrick's best effort at a solution (of sorts). Personally, I am a little more optimistic that a political rebellion against the Potomac Regime (his term) could happen at any time, with the right spark. No, we won't get the America of 1955 or even 1995 back, but who knows what'll happen?

* This was in the direction away from the hospitals.

*** I assume these two economists, Case and Schiller, started their tracking of this market in the year 2000, as their indexes for metro areas all start at 1 that year. It's an index, remember, so one can't compare one from one city to another directly to see price differences, but it works great for comparing a trend in one city vs. another or to the national average index, or just to watch the trend with simpler lower values than actual median price.

**** With the $ going down the toilet quickly, I don't know what to call it now - housing floaters? They do like their houseboats out there in Seattle, BTW. In that movie Sleepless in Seattle (not about the housing bubble!), Tom Hanks lived on one of those hundreds of houseboats on Lake Union, basically a mile or two from downtown.

***** The 2nd is another James, James Fulford, who introduced Mr. Kirkpatrick before his speech.

Europeasant
PS I once heard a St Louis Fed person say that if the population of America does Not increase by a certain percentage every year then there will be a financial crash of epic proportions. So if the American people do not reproduce then the people in power will import people from elswhere. The populations of Central and south America are very large. The population of Sub-Saharan Africa is very large at about currently 1.2 billion projected to be 2 billion in the near future. And there's not a dammed thing we can do about it.
Population Ponzi scheme.
Moderator
PS: I should add too, for M here, that maybe, due to the very people you point out, the driver was jaded, knowing that the most likely thing he was doing was going to pick up some deadbeat who needed a free ride to downtown. I have a doctor's story on this sort of thing, but his was extreme.
Moderator
PS: Yeah, M, I thought about this, but it's a busy intersection, and cars were piled up to fill up available lanes. Does that stop 'em all? (Maybe not, haha). Perhaps this driver had already had a traffic mishap.
M
PS

I suspect the driver was taking longer to scan up the streets leading to the intersection in case one of the Special People decided that the lights and sirens didn't apply in his case.
Moderator
PS: That's what Tucker Carlson's book "Ship of Fools" concluded too, Alarmist. Have you read that one?
The Alarmist
PS

Yes, they like floating in Seattle. You know what else floats?

The problem with the modern world is that Noblesse Oblige has been replaced with Woke Socialism. The former was a system of giving, the latter is a system of taking.